A glimmer of hope about the economy may be emanating from the Atlanta Boat Show.

Some 25,000 visitors are expected this weekend at the 50th annual boat show in Atlanta.  Some of them will attend with plans to buy vessels and toys that promise relaxation and good times with friends and family, or to check out marinas that advertise a suitable lifestyle.

Even in this trying era after the Great Recession, Georgia still ranks in the top 15 states in terms of boat registrations. Together with its sister state of Florida, which is No. 1 in marine commerce, Georgia stands as a major market for the marine industry, according to the show’s manager, Larry Berryman. 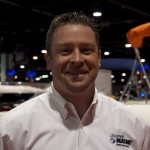 “As with everything in the recreation industry, which relies on discretionary income, the marine industry receded,” Berryman said. “As consumer confidence improves, generally boating will follow. This industry is never going to evaporate because people are going to find a way to re-budget.”

There’s no doubt that Georgia faces an uphill climb. A flurry of economic forecasts released late last year shows the state will lag the nation in creating jobs. Metro Atlanta is no longer a destination of choice for the young and upwardly mobile, according to a report by the Brookings Institute.

Park Marine vice president Brent Danneman brings the perspective that comes with attending the Atanta Boat Show for 35 years. Park operates six marinas on lakes Lanier and Allatoona, and one in Illinois.

“We’ve seen a lot of good times come and go,” Danneman said. “In this slump we’ve seen the stay-cation come along, where people stay closer to home instead of going to Disney World.”

Danneman makes the case that a boat is a better investment than a trip to a theme park. The trip provides good memories and photos. A boat has the tax advantage of depreciation for five years, and it’s an asset that retains value, he said. 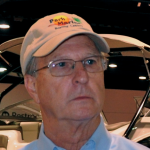 “And boating is a great family activity,” he said. “I’m selling boats to the grandchildren of people I sold boats to years ago.”

The concept of boating as a lifestyle is one reason that marina manager Steve Arndt and two colleagues traveled from the Panhandle of Florida to pitch their facilities to Atlanta-area boaters. Arndt works with the St. Joe Co., which has evolved from a timber company to a master developer of residential and resort communities in Florida and Georgia.

“What we’re doing here is selling the Panhandle as a destination,” Arndt said.

Arndt said most of the folks he expects to talk with at the show will be looking for a different type of experience from the lake boating available in North Georgia. He hopes to win them over for more than just a few holidays along the Gulf of Mexico. 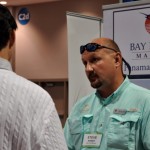 “Eventually they’re going to retire, or relocate for a different boating experience,” Arndt said. “And people tend to go where they’ve been before. So what we’re here for is those long-term customers – the transient boaters who come down for a weekend and ultimately decide to stay, or at least keep their boats with us for longer periods of time.”

Berryman said the boat show is addressing the pocketbook reality of the recession with a variety of price points. Many vessels have placards that advertise the monthly payment, as opposed to the total cost. Some start below $200 a month. The annual household income of two-thirds of boat owners is below $75,000, according to National Marine Manufacturers Association.

“Like we say – there’s a boat for every budget,” he said.

Consider pontoon boats. The Harris Flotebote has vessels priced from about $20,000 to nearly $70,000.

Or consider runabouts. Boston Whaler offers a 13-footer with motor and trailer for about $13,000. A hot wakeboard boat can approach $100,000.

Or consider a luxury power cruiser. The list price for one of the larger vessels at the show topped $400,000, but dropped to below $300,000 with show-related discounts.

For information about the Atlanta Boat Show go to www.atlantaboatshow.com 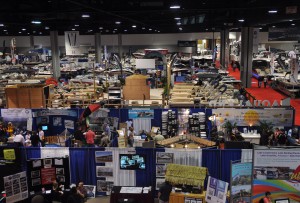