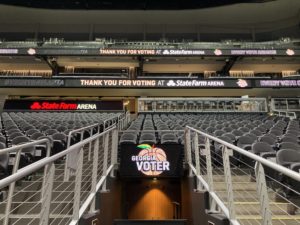 The headlines on Georgia’s primaries were just as bad as the long lines, with some characterizing it a “meltdown.” Another called it a “debacle.” No matter the characterization, the uproar has led two nonpartisan grassroots organizations, GaVotingWorks and Georgia Support The Vote, to help businesses get directly involved in Georgia’s democratic process.

Engaging companies in the democratic process is a part of ongoing national efforts to increase voter turnout and create a streamlined voting process for residents. Such efforts include encouraging businesses to provide paid time off to staff so they can vote or volunteer at the polls, and provide resources for poll workers on Election Day.

GaVotingWorks is a nonpartisan nonprofit that encourages businesses to be a part of the solution on Election Day. Companies can sign up to collaborate with GaVotingWorks and will receive a free toolkit for employers of every size who wish to find information to support their employees

“We’re community organizers who want to mobilize the business sector to help the elections,” GaVotingWorks co-founder Jennifer Dorian told SaportaReport. “Early on, we did get in touch with the [Georgia] Secretary of State, and they were receptive. Brad Raffensperger came to our first meeting and he stayed for a whole hour and briefed us on what they needed.”

Global company ICP, which has an Atlanta office, is one organization taking advantage of the program. CEO of North and South America Christopher Grakal said they’re giving employees the day off to vote on Election Day. Before that, they observed the standard Georgia law of allowing employees four hours off to cast ballots.

“Obviously, every election is important, but this one, arguably, is one of the most important we’ve ever had,” Grakal told SaportaReport. “And when you throw in the pandemic and the disruption that we’ve had in our lives, I just thought it was important to give our employees a break to take the pressure off them.”

The company also allotted volunteer time to employees who wanted to help with elections.

“We knew that volunteer time might be needed in advance of that day, so we didn’t want to limit it to [election day],” Grakal said. “We just made the decision that we could add to that, not create a choice for employees but give them both.”

Aside from asking businesses to participate in the democratic process, GaVotingWorks is also encouraging them to donate COVID-19 resources to ensure a smooth and safe voting process. Home Depot has donated 9,200 plexiglass shields to protect poll workers and voters at Georgia’s polling locations. Cox Enterprise has also purchased 20 ballot boxes for metro Atlanta and rural counties with the greatest need for them.

“The outpouring of support from the business community for our fellow citizens and election officials has been truly remarkable,” GaVotingWorks Founder Betsy Armentrout said in a pre-released statement. “We are all moving rapidly to meet the needs with creative solutions for a safe, smooth, and accessible election process.”

Like Armentrout, members of the Atlanta Rotary Club wanted to see changes following June primaries. Those members created Georgia Support the Vote, a nonpartisan volunteer coalition that provides businesses with tools to keep their employees civically engaged. That includes encouraging member companies to consider adding flexibility for their employees in scheduling time off to vote and rewarding them for serving as poll workers.

“I think one of the reasons traditionally that businesses have not been so involved in the electoral process is that they don’t want to participate in partisan politics, and they haven’t seen it as their role,” said Michelle Nunn, a founding committee member of Georgia Support the Vote.  “We wanted to really give companies the assurance that, and I think they want to be able to ensure that their employees and stakeholders, that they’re not trying to influence their choice, but just their capacity to make that choice by voting.”

Eric Tanenblatt, a founding committee member of Georgia Support The Vote, said the group’s mission is to inform, encourage and enable people to vote. “I think it just speaks to the commitment that people in our community have to try to make sure that our elections go smoothly,” Tanenblatt told SaportaReport.

For Atlanta-based Bluelinx Corporation’s chief administrative officer, Shyam Reddy, civic duty had been ingrained in him at a young age.

“This general philosophy about civic engagement started when I was a kid, as a child of immigrants growing up in a small town in Georgia,” Reddy told SaportaReport. “So, I was raised with this general view to not only contribute to the economic fabric of America but also to give back to the community and take full advantage of the democratic process.”

Reddy’s company is offering employees paid time off to vote, whether it’s to fill out an absentee ballot, early vote, or vote in person. Paid time off (PTO) was also offered for people registering to vote. They are also sending out email notifications about election deadlines and early voting.

“We’re just trying to serve as a conduit for important information while also providing PTO to enable people to exercise their right to vote, which as well all know, is core to our democracy,” Reddy said.

Both Grakal and Reddy said their companies both have plans to continue election efforts beyond the presidential election, and are working on how that will look in the future for local election races.

“Going forward it would be more localized,” Reddy said of his company’s plan. “Not every market will have an election. So, we’ll have to think about how to manage that, but it’s definitely on the table.”

Companies looking to get involved with Georgia Support The Vote can click here. To learn more about GaVotingWorks, click here.