The Atlanta Municipal Clerk’s office for years has redacted the contact information of political candidates from campaign finance documents in an online database, a practice one open-records expert called unlawful and defeating the purpose of transparency. In response to SaportaReport questions about the practice, Municipal Clerk Foris Webb III says the redactions will be halted and existing ones undone. 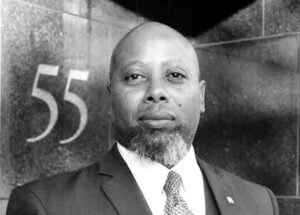 Webb said in a June 29 email that he ordered the redaction removal to begin on currently active declarations of intent to raise campaign funds, or “DOIs,” and that he would examine older documents in the “Easy Campaign Finance Portal.”

“Thank you for bringing this matter to my attention,” said Webb, who is also the City’s election superintendent. “I agree with your concern and subsequently staff has been instructed to un-redact the DOIs that have been redacted, which appears to be less than 30, and not do so going forward. … I will further investigate this matter and offer additional training, apologies for the inconvenience and thanks again for bringing this matter to my attention.”

The clerk’s office is the repository for campaign finance disclosure documents for candidates for City government offices, Municipal Court judge positions and Atlanta Board of Education seats. The point of the records is to create transparency and accountability about who is running for office and how they are raising and spending money. The documents are posted, usually in PDF format, on the online portal for public access. 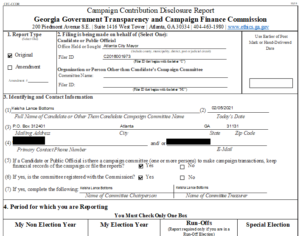 Among the required information on the various documents are the candidate’s address and phone number and/or email address, and sometimes the contact information for the candidates’ campaign officials. In the vast majority of hundreds of documents reviewed by SaportaReport, dating back to 2013 and up to this year’s campaigns, that contact information was blotted out or missing. The only common exception seemed to be that mailing addresses were left unredacted if they used a post office box rather than a residential address, a privacy move that candidates are free to make. Other scattered exceptions appeared to be items overlooked in the otherwise habitual redacting.

The campaign finance reports of incumbent Mayor Keisha Lance Bottoms are a case study. Of the 32 documents filed by the Bottoms campaign on the portal from 2016 to this year, none contain her phone number or email, even though that information is listed as required. Of those documents, 27 are noticeably redacted and the other five are missing information with no clear evidence of whether it was redacted or left out.

Some of the redactions are obvious: black boxes placed over the phone number and email address. But others used a subtle manipulation of the PDF to white out the information, which would be undetectable to someone without knowledge of how to examine its underlying software code — and if it wasn’t for small mistakes in redacting on several documents.

On a couple of the Bottoms documents, a few letters or a number appear scattered on the address or email lines, revealing a white-out redaction happened. In others, a line for the email address is blank, but the word “com” appears beneath the line, suggesting the deletion of an address ending in “.com.” Using the “inspect” tool in a browser or digital document reader reveals that there is indeed an email address hidden in that spot: “[email protected]” In some cases, the address is visible for a split second to anyone while the document loads before the white-out kicks in. 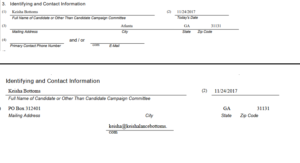 Above, a detail of a November 2017 campaign finance report from Keisha Lance Bottoms with the word “com” leaving a hint about the redaction of her email address. Below, the full email address revealed briefly by a glitch when the document loads.

Some municipal candidates also file reports in a state system that does not redact information, and there may be other ways to locate candidates online. Then again, there may not, especially for first-time candidates. Regardless, transparency is the point and public records laws apply, says David E. Hudson, an Augusta attorney with expertise in open-records laws who is on the board of the Georgia First Amendment Foundation.

Told of the clerk’s redactions earlier this year, Hudson said that “there is nothing in the [Georgia] Open Records Act that allows redacting an individual’s address and phone number” in such documents. There’s an exemption for public employees, he said, “but that would not include candidates for office or actual office-holders.”

Hudson also called “crazy” the underlying notion “that a citizen could not write to or call an elected official or a candidate to be one.”

Also not a fan is Vincent Fort, a former state senator who ran unsuccessfully for mayor in 2017. His own mayoral campaign reports are redacted in a way that would unnoticeable if some weren’t slightly off-center, leaving the edges of letters of the missing words.

“I think that’s problematic,” Fort said of redacting the contact information. “If you’re an elected official or candidate — people were surprised, but I didn’t give a damn if people had my cell phone number. That makes you more accessible and transparent. … If you’re gonna run for office, you ought to be accessible. Now, whatever you provide [in campaign finance filings] ought to be public information, I’ll say that.”