Atlanta’s most successful urban renewal program over the past two decades is the subject of a work session on Monday that’s been called by two committees of the Atlanta City Council. 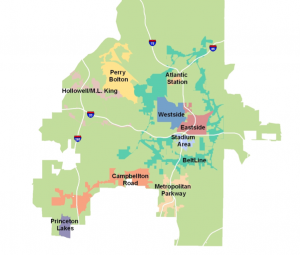 The primary purpose of the session is to consider results of an audit of the city’s tax allocation districts (TADs) that was released in May by Atlanta’s internal auditor, Leslie Ward. The audit portrays the city’s program as needing more oversight by the council, and it identified $226 million that it says is sitting in city coffers with no specific use attached to the money.

Since the audit was released, the city agency that manages the TAD program has hit two more bumps – one involving a warning issued by a New York bond rating house, the second involving Mayor Kasim Reed.

First, Moody’s Investors Services has flagged the amount of bonds issued on behalf of the city’s renewal program in its routine report of the city’s fiscal condition.

If the TAD-backed projects can’t pay their taxes, the city’s bond rating could be affected, Moody’s reported. These bonds account for half of Atlanta’s outstanding debt, according to Moody’s. Atlanta is not legally bound to repay the TAD bonds, but the audit noted that, in practice, investors expect to be repaid and other governments have had to find ways to make payment.

Second, the mayor did not protest when the city council cut $500,000 from the $3.1 million Reed had requested for Invest Atlanta, the city’s development arm that runs the program.

Initially, Reed had requested s total of $3 million for Invest Atlanta for the fiscal year that began July 1. That amount included an additional $1.1 million, above the continuation budget, for the agency to use to promote job creation and economic development.

After the council cut the mayor’s requested increase to $600,000, for a total appropriation of $2.5 million, Reed commended that amount in a statement.

The program at issue involves the city’s use of tax allocation districts, called TADs.

TADs are helping to pay for signature renewal projects including the Atlanta BeltLine; Atlanta Streetcar (some of the segments identified in the proposed transportation sales tax); Atlantic Station; Georgia Aquarium; and Center for Civil and Human Rights.

TADs are geographically defined tax districts. TADs work by selling bonds to raise money to induce development in a blighted area. Inducements often include money for roads, sewers, parks and other public amenities.

TAD-backed bonds are repaid by gathering the increment of property taxes collected on developments built after the creation of the district, and using that increment to make the payment.

Representatives of all three governments are invited to Monday’s work session, which is to start at 3 p.m. at Atlanta City Hall.

Previous Article
Preserving Atlanta’s Pittsburgh neighborhood against all odds
Next Article
To move forward, Atlanta must find its magic and rediscover the ‘Atlanta Way’