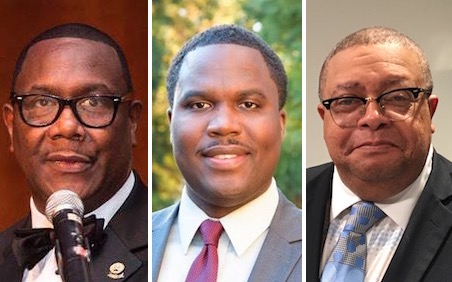 Update: References to candidate Darrion Fletcher have been removed. He died in late September.

Three candidates want to be on City Council from a district that runs all the way from Atlantic Station highrises to the new Mercedes-Benz Stadium and the westside bungalows of some of Atlanta’s most storied neighborhoods — and some of its most distressed.

Incumbent Councilman Ivory Lee Young Jr. was first elected to District 3 in 2001. Atlanta City Council would be the first elected office for each of his challengers.

We asked candidates their thoughts about City Council, the district, and their plans if elected. Click to read the Q and As:

Clay and Young both have serious financial support, according to the most recent campaign finance disclosures available. Clay reported raising nearly $20,000 in campaign donations in the three months to June 30, bringing his total fundraising over the whole campaign to more than $58,000.

Young reported nearly $7,000 in donations in the three months to June 30. However, as an incumbent, he can roll over donations from previous campaigns and did not start at zero. Young reported $17,470 in his campaign account at the end of June.

Brown’s campaign reported most of its budget comes from a $2,500 loan.