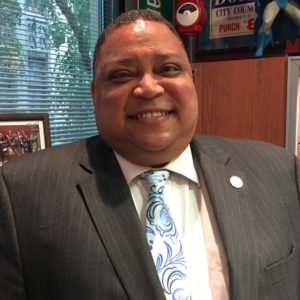 Michael Julian Bond is running for reelection to Atlanta City Council Post 1, an at large citywide office. From 1994 to 2001, he represented parts of west and northwest Atlanta on Council.

A: I have multiple concerns for the city. Right now, I think probably the priority would be affordable housing, making sure that we have fair and equitable affordable housing policy for all parts of Atlanta. One that can obviously accommodate residents who require that type of housing, but also a process that enables developers to readily build affordable housing.

Q: What can you as a Council member do about that?

A: There are several things. One, I supported the legislation to create the affordable housing disclosure every time there’s a new development.

But what’s currently on the table … I put in an ordinance to use the city’s surplus properties that are … practical and eligible to be used, to give that property to developers for affordable housing. Developers have often said that the No. 1 prohibitive issue for developing affordable housing is the cost of the land. The city has about 1,400 parcels of land, about just over a third of that is probably conducive to the construction of housing, whether its single family or maybe some small multifamily. And turn that over to precleared developers at a nominal price — right now we’re talking about a dollar — for them to build affordable housing.

And this property is everywhere, it’s not concentrated in any particular part of town. It can be spread out in all four corners of Atlanta.

Q: What’s the political accomplishment you’re most proud of?

A: … Probably the thing that’s had the biggest economic impact would be the development of the westside TAD. Over the years there have been many developments that have come up out of that that are bricks and mortar, that people can actually see, feel and touch.  Before a ‘food desert’ was a thing we brought a Publix grocery store to that area. That Vine City area hadn’t had a grocery store in 30 years at that point … The community has directly benefitted and directly influenced the funding of certain projects in that particular area so that’s a lasting example.

And second right behind that is the development of the Atlanta Development Authority [which operates as Invest Atlanta]. Prior to, I think it was 1997, you had several different authorities and redevelopment agencies working in concert but operating independently in Atlanta. …

… Why that is so significant is that the way it used to operate, a redevelopment agency would create the plans, do the drawings or whatever, do all that work to create a project. Then they’d have to go to an authority to try to beg for the bonds or the financing to make it happen. But now you’ve got a situation where all that is self-contained, it’s all in one shop. … This enables quote unquote the city or its proxy, the authority, to be its own developer and seek out redevelopment and they’ve done a good job of that.

A: The biggest one is maintaining the city’s financial position. That’s going to be hard for people to do because we’re in a period of largesse. There are good times in the city of Atlanta right now. Despite the tax digest [being frozen this year], the city is in the best financial state it’s been in really since the Campbell-Jackson years. Our bond rating is the highest its ever been, it’s AA+. We’re the envy of most municipalities around the country. We’ve right sized our bureaucracy and at the same time, we’ve taken care of every group of employees by giving them improved benefits and salaries. Our lowest-level employees by [fiscal year] 2018 budget will be making a minimum of $15 [an hour], a livable wage.

We’ve done this, We’ve improved our reserves from $7 million to what Wall Street says ought to be the ideal, which was $175 million, and we’ve done this over the past eight years without raising taxes. Actually rolling back taxes pretty much every year. So, this has been a really good mayor-and-council relationship when it comes to our finances.

Of course we’ve resolved our pension issues, which saved the taxpayers here about $25 million a year. We’ve made a lot of good financial progress and the next Council has got to maintain that.

Q: Whats something that this council, this outgoing council has gotten right?

A: … The pension is No. 1. Because we took that head on as soon as we got into office. It set the tone for how we dealt with our financial house. I think we did well with a lot of our economic development policies. A lot of decisions like dealing with City Hall East, resolving these different projects … particularly on the east side of town has helped in tandem with development of BeltLine to make substantial improvements to that side of town.

Some of the public safety decisions we’ve made, maintaining 2,000 police officers. …

… And taking care of our infrastructure needs, our transportation needs … I was really pleased the first piece of legislation I introduced when I got sworn in in January 2010 was asking that we do a municipal option sales tax for infrastructure, transportation.  And to see it realized, under Mayor Reed’s leadership in tandem with City Council, I think is very pleasing to me.

Q: What’s something this Council has gotten wrong or failed to do?

A: I don’t know if we’ve done anything wrong, but I think we have probably not gotten the word out about the good things we have done. There’s always more that you can stretch and try to achieve within a term. I don’t know if there’s anything that we erred in. I mean, it sucks to lose the Braves. But we’ve gained my favorite sport, Major League Soccer. …

… I don’t think we did anything entirely quote unquote wrong, but I think there are times when perhaps the public could have been better educated about what we were doing. Better made to understand what direction the city was going in. I think now everybody loves the Mercedes-Benz Stadium, but the preparation for that, the city’s support of that, I think was widely misunderstood. I don’t think it was ever effectively explained why we financed the deal, why we supported the deal. …

Q: Overall, in closing, what’s your pitch to voters, why should they vote for you?

… Most of the legislation that I’ve passed, and I’ve passed a significant amount of legislation, has been generated by the public, by the concerns that they have raised and I believe that we have been very effective and responsive to constituent needs and constituent services. I believe that public service is a mission, I believe it is something that is sacred, something that I enjoy doing, I believe that we have a special covenant with the public to provide the best services possible to them. And I enjoy doing it and I humbly ask for their support in allowing me to continue.

Previous Article
Big freighter due in Savannah hours before port is to close for Hurricane Irma
Next Article
Atlanta City Council Candidate Q and A: Courtney English