The Atlanta City Council is slated to vote Monday on a proposal to allow the rainbow flag to be painted on the road as four crosswalks at the intersection of Piedmont Avenue and 10th Street. The artwork is to be removed a few days after the Atlanta Pride Festival.

Atlanta Councilmember Kwanza Hall sponsored the resolution to allow the crosswalks to be painted. Hall also sponsored a resolution this month that established every June 26 as LGBT Equality Day.

The original plan for the crosswalks envisioned them as a permanent installation. Public Works Commissioner Richard Mendoza later determined the installation would be temporary, citing the city’s need to establish a better policy regarding such projects.

The project’s Facebook page attributes this letter to Mendoza:

The pending legislation sets the time frame from about Oct. 3 through about Oct. 16. The Atlanta Pride Festival is scheduled Oct. 10 and Oct. 11. 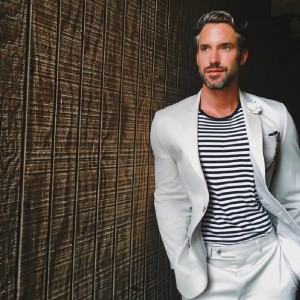 Sepulveda works as an interior designer and his perspectives are shaped by his childhood in his native Puerto Rico, according to his website.

The legislation was drafted by Robin Shahar. Shahar, a chief counsel in the city’s Law Department, serves Reed as his top advisor on LGBT issues.

Sepulveda’s website notes that he chose the intersection because it is the, “epicenter of the LGBT community.”

The legislation quotes Sepulveda as describing the artwork as: “[A] visual message of acceptance, unity and tolerance that reminds us all of how diverse the [LGBT] community and its allies are.”

On his webpage, Sepulveda goes on to say that the artwork represents a broad scope of issues: 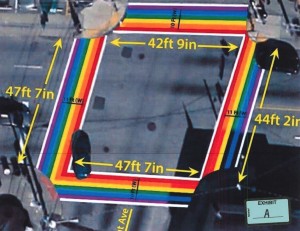 This rendering of the proposed “Atlanta Rainbow Crosswalks” is included in the legislation pending before the Atlanta City Council. Credit: City of Atlanta

Sepulveda proposes to install, maintain, and remove the artwork at no cost to the city, according to the legislation. He passed his original fundraising goal of $20,000 by raising $40,000, according to the project’s Facebook page.

The board of Neighborhood Planning Unit E unanimously endorsed the project in a vote taken June 2, according to the legislation.

NPU-E represents neighborhoods including Ansley Park and Sherwood Forest on the north, to Georgia Tech and Marietta Street Artery on the south.