Atlanta Fed President and CEO Raphael Bostic delivered a blunt message in a Wednesday webinar with the Rotary and Kiwanis clubs of Birmingham, Ala.: 'It's going to be tough.' Credit: zoom.us

The Federal Reserve confirmed the obvious Wednesday – “Economic activity contracted sharply and abruptly across all regions in the United States as a result of the COVID-19 pandemic.” Price hikes are reported across the Southeast in grains, milk and eggs, as well as demand for oranges. 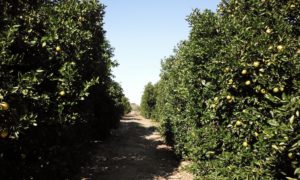 Demand for Florida oranges is climbing, according to the Wednesday edition of the Federal Reserves Beige Book. Rising demand points toward higher prices. Credit: wikimedia

Rising prices for agricultural commodities haven’t garnered much attention. They made it into one sentence in the corner of the April 15 edition of the Beige Book:

The Beige Book is a summary of observations collected from business contacts and produced eight times a year. In this case, the material was collected on or before April 6.

Atlanta Fed President and CEO Raphael Bostic is to participate Thiursday in two webinars to discuss the Fed’s views and responses to the pandemic:

Bostic has been on the circuit this week. He’s spoken in webinars sponsored by the Rotary and Kiwanis clubs of Birmingham, Ala. and with Alabama Works program for the Fed program, Workforce Recovery Post COVID-19. 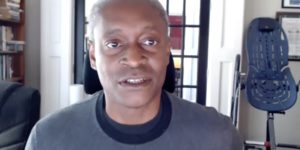 Atlanta Fed President and CEO Raphael Bostic delivered a blunt message in a Wednesday webinar with the Rotary and Kiwanis clubs of Birmingham, Ala.: ‘It’s going to be tough.’ Credit: zoom.us

Bostic has been blunt, telling the Birmingham crowd: “It’s going to be tough.”

The Fed’s Beige Book, released on schedule on Wednesday afternoon, provided an equally tough view on the economy. As always, the report compiles information gathered from business contacts across the country, and synthesizes them into a national report and 12 regional reports tailored for each of the Fed’s 12 Districts.

The high-level takeaway from the national report on the nation’s overall economic activity observes:

The summary by the Atlanta Fed for its territory – Alabama, Florida, Georgia, and portions of Louisiana, Mississippi and Tennessee – observes: “On balance, economic activity in the Sixth District deteriorated from mid-February to late March, and the outlook diminished as a result of the COVID-19 pandemic.”

Florida’s citrus crop was reported in this observation: