The Atlanta Fire Rescue Foundation says it played no role in picking the controversial location of a proposed public safety training center, contradicting an official site recommendation report, and later said it considers the choice “viable.” 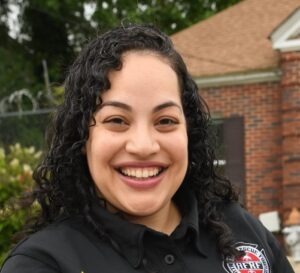 “When the Atlanta Fire Rescue Foundation was asked to participate, the site was already determined,” said AFRF Executive Director Shirley Anne Smith, who was a member of a City advisory council that, according to its own report, reviewed an alternatives analysis and recommended the former Atlanta Prison Farm as the site. Smith would not elaborate on what happened at the advisory council meetings and declined an interview request, instead responding in brief emails.

Asked if AFRF is satisfied that the Prison Farm site meets the Fire Rescue Department’s needs or if the foundation might prefer an alternative site, Smith initially did not respond. Three days after the publication of this article, Smith responded with a statement of support for the site that also accused SaportaReport of quoting her out of context and complaining of a previous reference to the training center plan being “secretly” developed as “patently false.”

“AFRF is in agreement with the APF [Atlanta Police Foundation] and City administration officials that the Key Road site recommendation is a viable location to build a comprehensive joint Public Safety Training Center for the Atlanta Fire Rescue Department and the Atlanta Police Department,” said a statement emailed by Smith. “As executive director of the AFRF, I was a member of the Atlanta Public Safety Training Center Advisory Council, and fully support the need for a training center that meets the public safety needs of the City.”

The APF, which has led the public advocacy and much of the behind-the-scenes organizing of the training center proposal, did not respond to a comment request.

The training center is intended to centralize and improve the City’s police and firefighter training facilities, as well as renting them to similar agencies in other jurisdictions. A core function would be replacing the existing police and firefighter academies, which previously were in badly aging buildings and are currently in new, rented facilities in Southwest Atlanta. The concept of the training facility has been studied internally since 2017, but the site selection and momentum toward actual construction is new.

The proposed location of the new training center is a City-owned property along Key Road within unincorporated DeKalb County, where the Atlanta Police Department already conducts some training. That proposal is in conflict with another City-approved vision for the Prison Farm: a piece of the South River Forest, a proposed 3,500-acre network of green spaces in southeast Atlanta and southwest DeKalb. The result is a massive controversy also fueled by debates over crime concerns, police funding and the transparency of the process.

The Atlanta City Council has proposed reducing the size of the training center from 150 acres to 85, among several other changes, and on Aug. 16 tabled a decision on a lease agreement for three weeks to get further public input.

According to the advisory council’s site recommendation report, the City’s Department of Enterprise and Asset Management reviewed all City-owned sites over 10 acres, then did “in-depth analysis” of a short list of three sites: Greenbriar Mall, Atlanta Metropolitan State College (which has since become the temporary site of the Atlanta Police Academy) and the former Prison Farm. 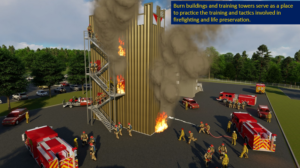 An Atlanta Fire Rescue Department training tower proposed as part of the new public safety training center as shown in a rendering by the Atlanta Police Foundation.

The report recaps those analyses, which spoke positively of the Prison Farm, negatively of the college, and gave a mixed but essentially negative review of the mall. It is unclear from the report what exact information from the analyses was presented to the advisory council.

Following the City Council’s vote to table a decision on the training center lease, Smith contacted SaportaReport and said that “the Atlanta Fire Rescue Foundation’s sole participation in this project has been to identify resource components that are a priority for the department’s training needs.”

“I did participate in all the meetings,” said Smith. “I specifically participated on behalf of the Atlanta Fire Rescue Foundation to identify resource components that are a priority for the fire department’s needs. We did not participate in the site selection.”

Update: This story has been updated with further comment from the Atlanta Fire Rescue Foundation.