A close-up of the Confederate monument carved into Stone Mountain as seen in the Atlanta History Center documentary "Monument."

“Monument,” the Atlanta History Center’s (AHC) new documentary about the Confederate carving on Stone Mountain, is not just a pioneering exercise in in-house educational filmmaking. It’s also smartly speaking in the moving-picture language that has so powerfully miseducated Georgians and the world about the Lost Cause myth, from “The Birth of a Nation” to “Gone With the Wind” to “The Dukes of Hazzard.”

A museum documentary can’t challenge those predecessors for spectacle and technique, but “Monument” is stirring and attractive in its own myth-busting ways. As Kristian Weatherspoon, the AHC executive in charge, told me, she chose the film medium “because of the powerful nature of it.” And at 30 minutes, the film’s concise demolition of Confederate monument mythos should be irresistible for history classes and social media shares.

Stone Mountain is the dunce cap Georgia wears in America’s classroom, an embarrassing epitome of backward-Southerner stereotyping that metro Atlanta is stuck with because of cryptoracists and neo-Confederates in the General Assembly. The question is not so much why the carving is still there as why its legislative backers are.

A few years ago, a North Georgia city council member made the news for blasting interracial marriage amid an allegation of racism in city hiring. I was less interested in his personal delusions than in which specific schools, churches and media were responsible for having so badly misinformed him – details the news stories let off the hook despite him saying this was about his Christian upbringing and anger at what TV was telling him about the modern world.

Surely one answer was the county school system, which had long employed as a history teacher Tommy Benton, the former state rep. who notoriously praised the KKK, insulted Civil Rights icon John Lewis, and filed a bill to glorify the amusement-park-encircled Stone Mountain and its Confederate imagery while speaking of “Gone With the Wind” as his idea of a tourism generator.

This inevitable, endless feedback loop between politics and entertainment is something the AHC is uniquely suited to disrupt. The museum has long engaged the myth breaking as custodian of the Margaret Mitchell House, and its permanent exhibit on the Civil War does a fine job of contextualizing the conflict in terms of slavery and the peace in terms of white leaders in the North and South shaking hands on their main common ground – warrior pride and racism. 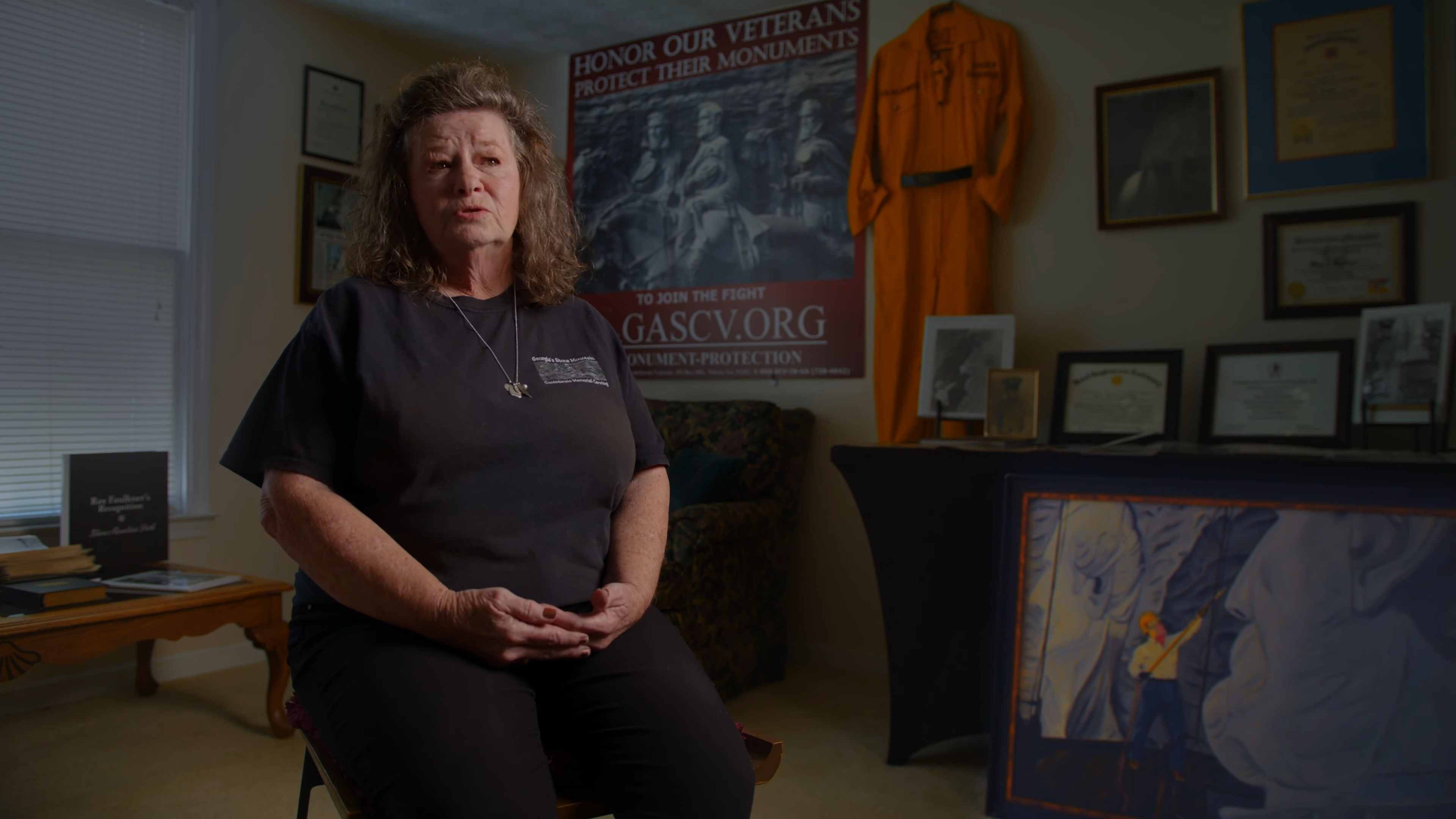 Donna Barron, daughter of the “chief carver” of the Confederate monument on Stone Mountain, as seen in the “Monument” documentary.

The AHC in recent years also became home to the “Battle of Atlanta” Cyclorama painting, a pre-movie form of mass entertainment spectacle that was used and abused for Lost Cause propaganda in generations of school field trips. The museum masterfully integrated the enormous painting into a multimedia show contextualizing it as both art and a political tool, something far more than a traditional exhibit could accomplish.

The multimedia approach is also the focus of the AHC’s “digital storytelling” department that Weatherspoon heads. A former journalist, she said the department looks for “undertold stories” and the right media to tell them under the banner “Atlanta History Center Originals.” The Stone Mountain movie is the first of its kind for the AHC and sets the stage for more, but the next big project on the drawing board is a podcast. The subject of that one is the forced expulsion of Forsyth County’s Black population by white lynch mobs in the early 20th century. (Hale said the department is always working on a “robust” revamp of the Margaret Mitchell House exhibit.)

“We see this as an exhibition in just another form,” said Weatherspoon about the Stone Mountain movie, describing a two-year process of research and filmmaking.

An 825-foot-tall rock and a carving that has been the subject of repeated statewide debate may not seem like an untold story, but its actual history is.

“We believe that a lot of people are not aware of the history. We’ve run into this over and over,” said AHC President and CEO Sheffield Hale. “They have an opinion about it, but they haven’t really heard the full history.”

Spoiler alert: That history says that the carving is about white supremacy.

As the film explains, no Civil War battle was fought at Stone Mountain, but it was the site of the horrific (and movie-inspired) 1915 revival of the Ku Klux Klan. The carving – depicting Confederate President Jefferson Davis and Generals Robert E. Lee and Thomas “Stonewall” Jackson – was not some immediate post-war artifact we might preserve as a curiosity of a terrible conflict over slavery. It was a bumbling, stumbling effort that was born in the 1920s Jim Crow era of white supremacists intimidating the Black population, went dormant for decades, rebooted, and gained money for completion only in the 1950s as a reactionary freakout directed against Brown v. Board of Education and the Civil Rights movement. It still wasn’t finished until the 1970s – when it became (in a bit the film doesn’t mention but an earlier AHC white paper details) a political albatross capable of embarrassing even the otherwise shameless and bigoted Richard Nixon, who played hooky at its dedication ceremony.

The film engages in some both-sides-ing to humanize the discomforts sparked in the debates. Donna Barron, daughter of Roy Faulkner, the monument’s “chief carver,” lays out a modern argument for viewing it as a tribute to trying hard – both in terms of Confederate soldiers fighting for their families (without reference to slavery) and her dad risking his life to make the “gigantic masterpiece.” On the other side is Genesis Reddicks, a young activist who was among those who successfully agitated for the removal of a Confederate monument in Decatur and who basically can’t believe a gigantic racist intimidation display is still standing. Other interviewees include former Gov. Roy Barnes, who oversaw a controversial struggle to get the Confederate battle emblem out of the state flag. 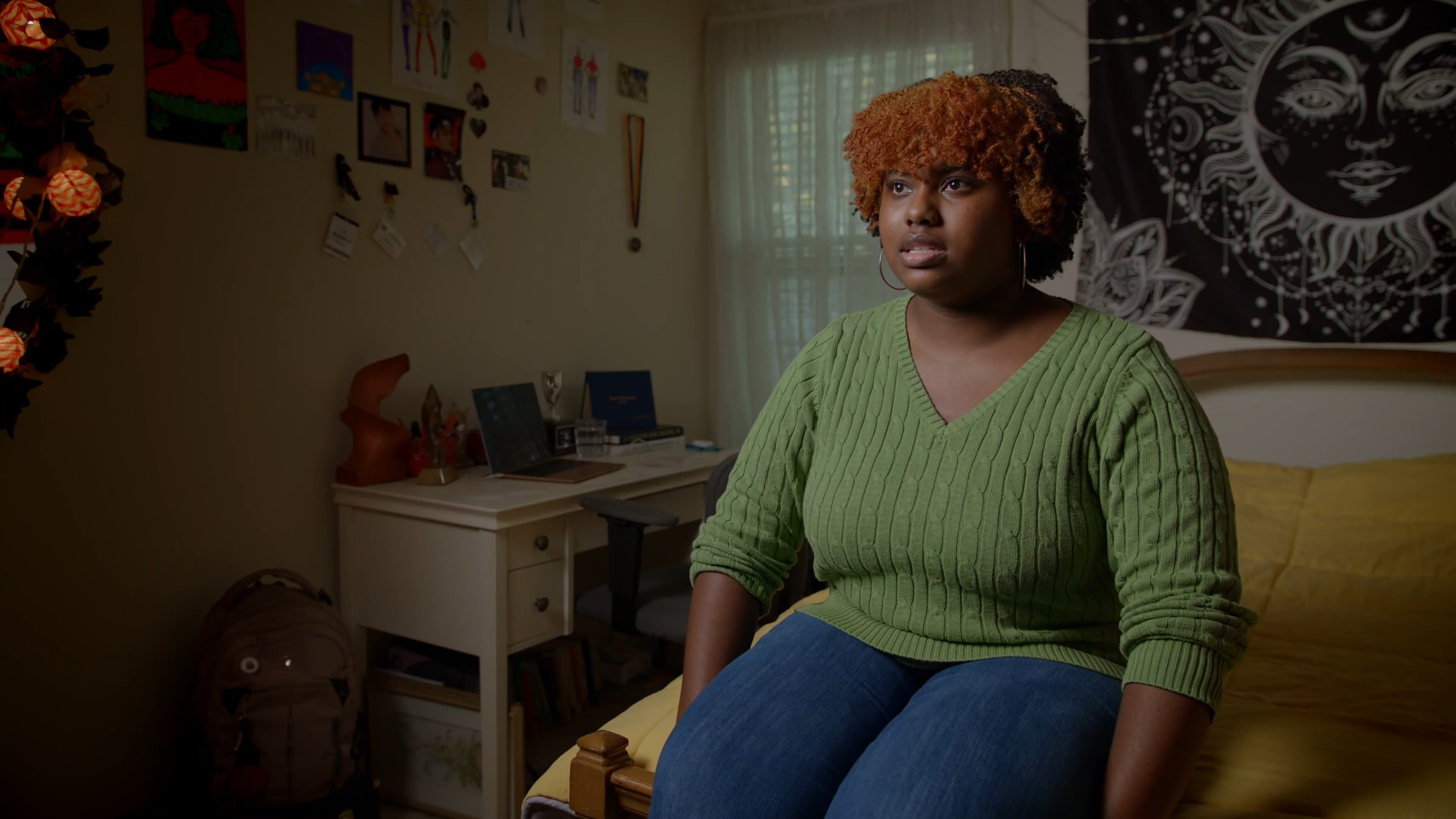 Genesis Reddicks, an activist in favor of removing Confederate monuments, speaks in the “Monument” film.

Released just in time for a new General Assembly session where someone might do something to change the monument, the film has its own clear angle. It opens with AHC executive Claire Haley noting it is “really weird” that the “largest Confederate monument in the world” sits just outside Atlanta, which is to say, looming over the cradle of the Civil Rights movement. Hale, who has a talent for zingers, addresses ye olde “heritage, not hate” bumper sticker philosophizing: “Heritage is history with all the bad parts left out.”

Which is to say, the film itself embodies its message that art and political messages go hand in hand – the question is, what politics and how grounded are they in reality and evidence?

A weakness of the film is its calm avoidance of specific ideas for the monument’s future, aside from saying the concept should be based in an acknowledgment of its racist origin. That’s good in terms of provoking viewers to think and imagine for themselves and inspire discussion like this column. But it’s also lacking in fun and photogenic ideas already out there – especially considering Hale has already said publicly that blowing the carving off the mountain shouldn’t be off the table.

There’s the half-joking concept of adding modern-day ATL culture heroes OutKast to the carving. Atlanta BeltLine visionary Ryan Gravel has proposed almost literally letting the Confederate imagery crawl back under the rock it came from by letting it decay, creating a true history museum there, and setting up a much-discussed memorial to Martin Luther King Jr., who famously gave Stone Mountain a pointed shout-out in his “I Have a Dream” speech. Funny how a historic moment authentically connected to the site has yet to be rendered into a monument.

Note that these ideas also involve arts and entertainment. That makes sense, since tourism was always a goal of the carving and Stone Mountain Park – once home to a “Gone With the Wind” exhibit – today continues to draw crowds to its oddball mix of natural wonder, amusement park features and pseudohistorical artifact, even if the crowds today are diverse and full of people holding their noses.

Museums have always had an element of entertainment – we don’t go hoping to be bored – and that’s why AHC’s expertise is doubly helpful in analyzing this particular attraction. The Cyclorama exhibit turned a troubling artifact into a civic must-see, elevating multimedia displays beyond mere spectacle and into the contextual, a story about all of us. The digital storytelling effort is another way of doing that. In the case of “Monument,” since the mountain can’t come to the AHC, the AHC can go to the mountain, and beyond, on YouTube.

“I think it’s an innovative approach to the museum working outside its walls,” Hale told me. Indeed. And now, this engaging film can help us do the work of figuring out how to make that odious monument’s site into something that represents actual history and all Georgians.

Share
Tweet
Share
Pin
Pocket
WhatsApp
Buffer6
Email
Reddit
6 Shares
Tags:
Previous Article
Middle-Income Americans Believe a Recession is Coming. Here’s What They’re Doing About It.
Next Article
With Ralston over their shoulder, legislators get off to a smooth start