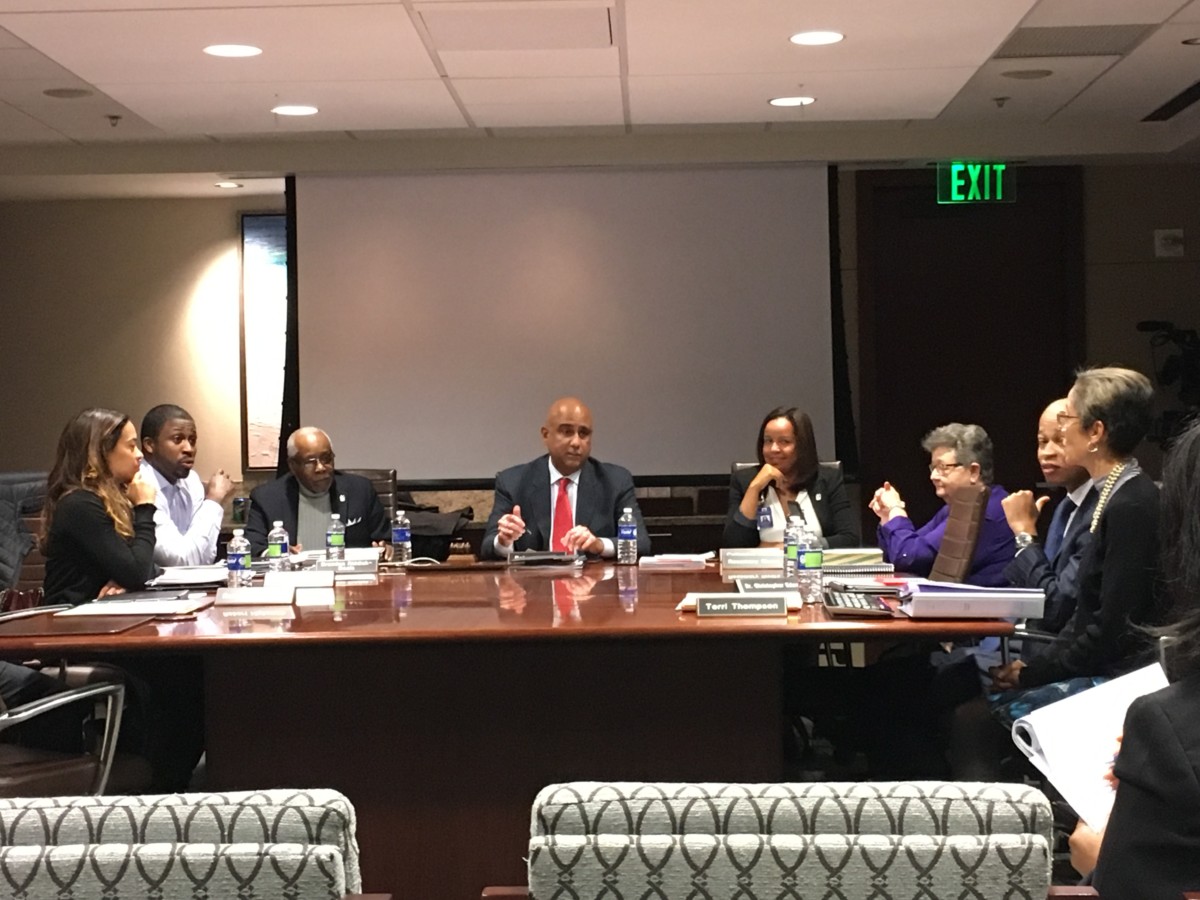 Dr. Christopher Edwards, center, at a meeting with his fellow members of the Atlanta Housing Authority when he was elected board chair in 2017 (Photo by Maggie Lee)

The Atlanta Housing Authority is heading into the new year with a new chair for a board of commissioners that also has two new fairly new members. 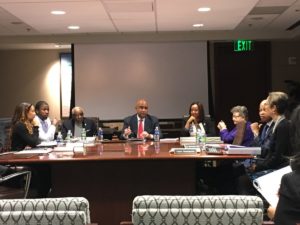 Dr. Christopher Edwards, center, at a meeting with his fellow members of the Atlanta Housing Authority Board of Commissioners, which voted him their chair on Wednesday. Credit: Maggie Lee

At their annual meeting on Wednesday, the board voted to make Dr. Christopher Edwards their chair. He’s an orthopedic surgeon who specializes in adult spinal disorders. Mayor Kasim Reed appointed him to the board in 2014.

The board is responsible for policy, fiscal management, and the appointment of the agency’s president and chief executive officer.

Edwards takes over from Robert Rumley, a financial advisor who was voted chair in June, after the resignation of his predecessor, Dan Halpern.  Rumley said he wasn’t going to run for re-election as board chair, but that he was going to take time to focus on business and family. The board voted him vice-chair for next year.

Also present were two new board members appointed by Reed who wore sworn in earlier this month.

One is Holland & Knight attorney Robert Highsmith, who replaces Halpern. Highsmith has served as outside counsel for Reed as well as several elected officials under the Gold Dome.

The other is Rosemary Rivers, an AHA resident-representative.

Edwards briefly addressed his board after the vote about his motivations and plans:

“Three tenets have always struck me as important in moving the community forward. First has always been health care, first and foremost. The second is education. And the third is housing. Without housing, the other two will not stand. So you cannot move the needle on moving people. communities forward without the important work that this organization does, and that’s what we’re focused on. … We have one of the most outstanding leaders in our CEO [Catherine Buell].  And her staff has been just exceptional, in my view, and I think in the view of my colleagues. And we’ve got great counsel in our fellow board members that bring us … the community perspectives, the legal perspectives, the real estate perspectives, in the goal of achieving more affordable housing in the city of Atlanta.

Atlanta is great because we include people, not because we exclude folks. Atlanta is great because we want diverse opinions, diverse people here. We want to be that great city. What we cannot do, and what I’ve said to my fellow board members in the past, we cannot end up being the Hunger Games, where those who have live within the city and others are just dispatched to the outskirts, just to come in and provide service. That’s not who we are. That’s not what made us great, and that’s not what gave us the slogan that we’re the city too busy to hate.

Edwards is a second generation Morehouse man and has served on the boards of trustees of the Morehouse School of Medicine, Grady Memorial Hospital, and other civic posts.