Atlanta may well be able to borrow money to provide affordable housing, based on the example of a bond sale Wednesday by a state with a credit rating one step above junk. Two questions are whether Atlanta’s city leaders want to take on new debt in the current economic slowdown, and what interest rate they’re willing for taxpayers to pay. 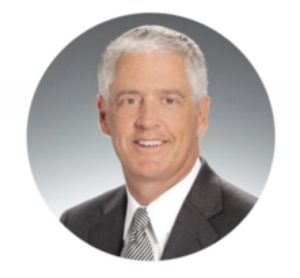 Any bond the city attempts to sell would face an uncertain market, according to a panelist on a discussion convened Thursday by the Volcker Alliance and Penn Institute for Urban Research:

Some on the Atlanta City Council are not ready to abandon plans for the city to help fund a program for affordable housing. The aim is to borrow money to help pay for building new dwellings, and restoring existing ones, that are affordable to those making the salary of schoolteachers.

The council’s initial plan to sell up to $200 million was withdrawn in April by Atlanta Mayor Keisha Lance Bottoms. Bottoms’ administration had recommended a bond sale of up to $100 million, but two council committees raised the sum to up to $200 million.

Bottoms cited declining city revenues amid the pandemic, as well as revenue uncertainty going forward. Meantime, the appetite among investors for new bond sales was minimal as the nation’s $3.9 trillion municipal bond market was ending its worst sell-off in history.

In the aftermath of the mayor’s action, affordable housing advocates including Atlanta City Councilmember Matt Westmoreland called for a bond sale of up to $100 million. The matter is up for discussion in a council committee chaired by Westmoreland.

Smaller sums could be considered, as they have been in the past. 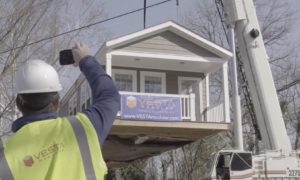 Potential measures to increase Atlanta’s supply of affordable housing includes the use of modular units, such as this one being lowered into place at 341 Sunset Ave., in Vine City. File/Credit: Homeplace Solutions

In 2007, the city sold a $35 million housing opportunity bond that was considered an aggressive amount when pushed by then Mayor Shirley Franklin. The interest rate was 5.8 percent and the city was paying a maximum of $2.8 million a year to retire that bond, the city’s chief finance officer reported in 2017. A $40 million housing opportunity bond authorized in 2017 was to be repaid at a cost of about $2.8 million a year, then CFO James Beard said.

The annual payment for the proposed $200 million bond issue could have been $13.7 million for the life of the loan, following two years of payments at $5 million a year that were designed to reduce repayment distress during the city’s expected pandemic-related revenue reductions. Atlanta’s current CFO, Roosevelt Council, Jr., outlined this scenario in a presentation to a council committee.

The new normal in the nation’s government credit market took shape Wednesday, when the state with a poor credit rating sold $800 million in bonds to cover anticipated cash shortages related to the pandemic.

Illinois sold an $800 million bond at an interest rate as high as 5.85 percent, according to a report by reuters.com. The state had sought a credit rating on the planned sale of up to $1.2 billion, and that’s when Moody’s Investors Service issued a rating one step above junk and with a negative outlook due in part to uncertainty over the pandemic’s effect on revenues and investments. Illinois decided to come forward with two-thirds the planned amount.

The results of the sale seem to be open to interpretation.

Yes, the bonds were sold, albeit at a premium. No, the market is not functioning normally, according to Hayes, a top leader of BlackRock. BlackRock has a portfolio of about $7 billion and the Federal Reserve chose BlackRock in March to steer tens of billions in bond purchases related to pandemic recovery efforts, according to a report by Morningstar.com.

Speaking as a panelist in a discussion hosted Thursday by the Volcker Alliance and Penn Institute for Urban Research, Hayes said: