A former high-ranking staff attorney at Atlanta’s housing authority says she unfairly lost her job in 2017 when she called out new management for risky moves that would delay housing development and jeopardize federal funds.

Karen Fuerst’s court filing has her taking credit for being Atlanta Housing Authority’s legal lead in its 2011 renegotiation of a deal to co-develop housing with Integral, an Atlanta developer, and its partners.. 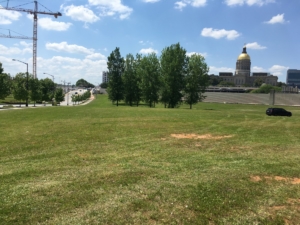 This land on Memorial Drive is one of four places Integral affiliates and Atlanta Housing would develop new housing. Each spot is is adjacent to developments Integral has already built: Auburn Pointe, CollegeTown, Villages at Carver and Capitol Gateway. File/credit: Maggie Lee

Speaking up for that deal, she alleges, is part of what got her into trouble during the tenure of AHA CEO Catherine Buell in a time of heavy leadership turnover.

Buell “appeared to have a personal agenda contrary to AHA’s mission and deliberately avoided seeking counsel from Fuerst,” the lawsuit claims. The complaint was unsealed by a federal court Tuesday.

Atlanta Housing, in its reply in court, called Fuerst’s filing a “classic tale of a subordinate employee’s desire to dictate the terms of her employment” to the CEO.

Fast forward to 2017, when Atlanta Mayor Kasim Reed and Buell at the housing authority attacked the deal in two separate court cases.

The city of Atlanta filed, then dropped, a lawsuit against Integral, its founder and CEO Egbert Perry and former Atlanta Housing Authority leader Renee Glover. The authority itself sued the four Integral-related companies that would build the second round of housing.

Buell, in 2017, said the housing authority was not a land bank for developers to purchase land at “rock-bottom” prices.

However, court rulings have broadly vindicated the legality of the deal signed by Integral and the AH leadership of a decade ago. And Buell departed when Mayor Keisha Lance Bottoms took office in early 2018.

Fuerst’s court filing alleges that by 2017, she was being “walled out” of work involving Integral, and that private attorneys hired by Buell were investigating the Integral agreement, including Fuerst’s role in it.

And she’s telling a federal court that damage to her reputation has made her unable to get new work.

Her court filing says she was the victim of “retaliatory discharge” in March 2017 from a job that paid nearly $220,000 plus benefits. She’s seeking unspecified damages.

Fuerst’s lawyer, Halsey Knapp, said Tuesday that it is “confounding” that the organization hasn’t figured out a way “to build more housing and have less controversy.”

Atlanta Housing’s court filing says Fuerst is no whistleblower and that the former staff attorney is relying on an obscure bit of law to make an amorphous accusation without bringing any evidence of corruption on Buell’s part.  The authority accuses Fuerst of trying to listen in on conference calls uninvited and of talking about her disagreements with Buell to many people.

“Atlanta Housing strenuously denies Ms. Fuerst’s claims and will vigorously defend itself against these false allegations,” the housing authority said in an emailed statement after this story was first published. “As you will see in an attachment to the case file, Ms. Fuerst attempted to file a HUD OIG complaint against Atlanta Housing and HUD dismissed that complaint as having no merit.”

(There are HUD documents in the case file. An email from the federal housing authority to Fuerst said that she did not qualify as a whistleblower.)

Certain documents in this case are available free from CourtListener, including all documents cited in this story. Some documents are redacted in part.