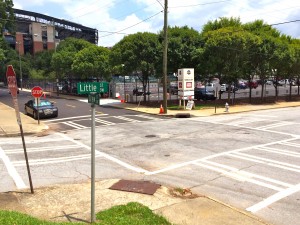 A storage vault for storm water runoff was installed beneath the media parking lot at Turner Field as part of the sustainable storm water management planned for Peoplestown. Credit: Donita Pendered

The planned system is based on a premise similar to the one that resulted in the water feature at the Old Fourth Ward Park, along the Atlanta BeltLine. As with the park pond fed by Clear Creek, the idea is to detain and filter runoff rather than direct it into the city’s sewage system.

In Peoplestown, one of three neighborhoods in progress, the city’s plan envisions a storm water management system that will use permeable pavers, bio-swales, detention ponds and storage vaults to capture from 10 million to 30 million gallons of storm water.

The project precedes the Atlanta Braves announcement that it was moving to Cobb County, and Mayor Kasim Reed’s subsequent proposal to sell the field and related properties to a developer.

The sustainable storm water management system that’s to be installed in Peoplestown, Mechanicsville and Summerhill, seems likely to put the area at the forefront of a national effort to improve sustainability when it comes to storm water runoff.

For more than a decade, landscape architects and engineers across the country have tried to figure out ways to treat storm water runoff without flowing it into overworked sewage treatment plants.

The issue is complicated by the fact that runoff can be hazardous. It contains more than water, given that runoff flows across lawns that have been fertilized, parking lots and streets spotted with various petrochemicals, not to mention animal waste.

Atlanta embraced this sustainable approach at the Historic Fourth Ward Park and saved an estimated $15 million, compared to the cost of installing a traditional sewage system to accommodate rain events in the Clear Creek basin.

For a total cost of about $50 million, the city built a 17-acre gem of a park along the BeltLine. The water feature has become an aesthetic amenity, though the purpose of Atlanta’s investment of $13 million in constructing the pond and related features was to ease storm water issues.

Margaret Tanner, a deputy commissioner in Atlanta’s Office of Watershed Protection, presented the latest portion of the Peoplestown program at the July 15 meeting of the Atlanta City Council’s Utilities Committee. 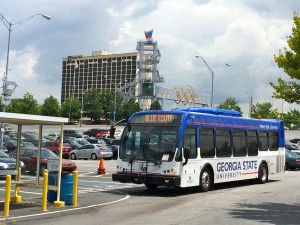 Storm water needs to be treated because it picks up hazards, such as fluids that leak from vehicles in this parking area at Turner Field. Credit: Donita Pendered

Tanner said Atlanta is preparing to install permeable pavers along six miles of streets. The pavers will be installed atop gravel bedding that will be 4 feet to 6 feet deep, depending on the need for depth. The idea is for storm water to trickle through the permeable pavers into the gravel bed, where much of the runoff will be stored until it trickles into the adjacent soil.

“It will slowly bleed out and infiltrate into the ground,” Tanner said.

Additional storage capacity is available in an underground vault that’s been installed beneath the media parking lot, adjacent to the south side of Turner Field. Future storage capacity is to be provided at Phoenix Park, in the form of bio-swales and a rain garden, Tanner said.

This part of Atlanta is among those that have long been troubled by flooding during heavy storms.

Peoplestown is located in a low-lying area known as the Custer Avenue CSO. Flooding is not uncommon in a community that covers 3,874+ acres. An engineer’s report shows that during storms, runoff can seep into the sewage pipes and back up above ground.

After the last major storm event, in July 2012, Reed assured Peoplestown residents that the city would resolve the flooding issue in their neighborhood. Some property owners continue various legal actions continue, and some owners are not satisfied with all portions of the city’s response.

This project is being handled by the city’s Watershed Department and is not related to the city’s ongoing investigation into the actions of some employees of the city’s Department of Public Works.

Two reports on situation in the Public Works Department are to be delivered Tuesday to the Utilities Committee, one from city Auditor Leslie Ward, who conducted an audit of the situation, and city Attorney Cathy Hampton.