Atlanta expects to save about $500,000 by refinancing a loan taken out in 2008 to help pay for upgrading the city’s water and wastewater system, a city finance official said Wednesday. The transaction is of note because the city secured a beneficial rate as municipal bonds face a swirl of headwinds.

Atlanta awarded $51.2 million in bonds in transactions dated Wednesday. The closing is set for June 21.

The Atlanta City Council approved the issuance Wednesday in a special call meeting. The council immediately sent the paper to Mayor Keisha Lance Bottoms for her signature, which enables the transaction to move forward quickly.

Atlanta did not extend the pay-off date of the debt in order to receive a lower interest rate. The $51.2 million is structured as three separate entities, each with a different retirement date and still set to terminate in 2041, according to terms outlined by EMMA/MSRB. The dates for final payoff of the amount of bonds issued include:

There’s nothing new or novel about governments issuing new debt to pay off older debt that carried a higher interest rate. 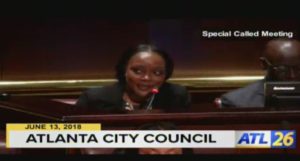 The 2008 bonds carried a variable rate that was changing every week, according to Jerraé Williams, Atlanta’s treasurer/chief of debt and investment. The all-in, true fixed rate of the $51.2 million bond issue is 4.15, according to John Gaffney, Atlanta’s deputy chief financial officer.

“In lieu of interest rates that are going to continue to increase, we need to fix out the cost,” Williams said. “We converted the variable rate to fixed rate. We are saving money, about $500,000.”

However, these sorts of transactions that once were routine are entering a new era. The tax overhaul bill President Trump signed into law in December 2017 made debt issued by state and local governments less attractive to one of their major buyers – banks.

During the first quarter of 2018, more than six of the nation’s largest banks reduced by $7.8 billion their holding of debt issued by state and local governments, according to a May 31 report by bloomberg.com. The report was based on a review of the banks’ first-quarter filings with the U.S. Securities and Exchange Commission. 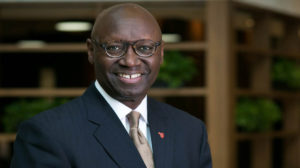 In addition, the Fed indicated Wednesday it may approve two more rate hikes this year, according to a report by businessinsider.com.

Against this backdrop, Atlanta’s incoming chief financial officer, Roosevelt Council, observed that the timing of the transaction was ideal.

“Our timing couldn’t have been better, because the [Federal Reserve] board chairman talked about increasing rates, basically today,” Council said. “We were able to lock in a pretty good price as it pertains to that.”

The mayor has nominated Council as CFO and his appointment is pending the council’s approval.