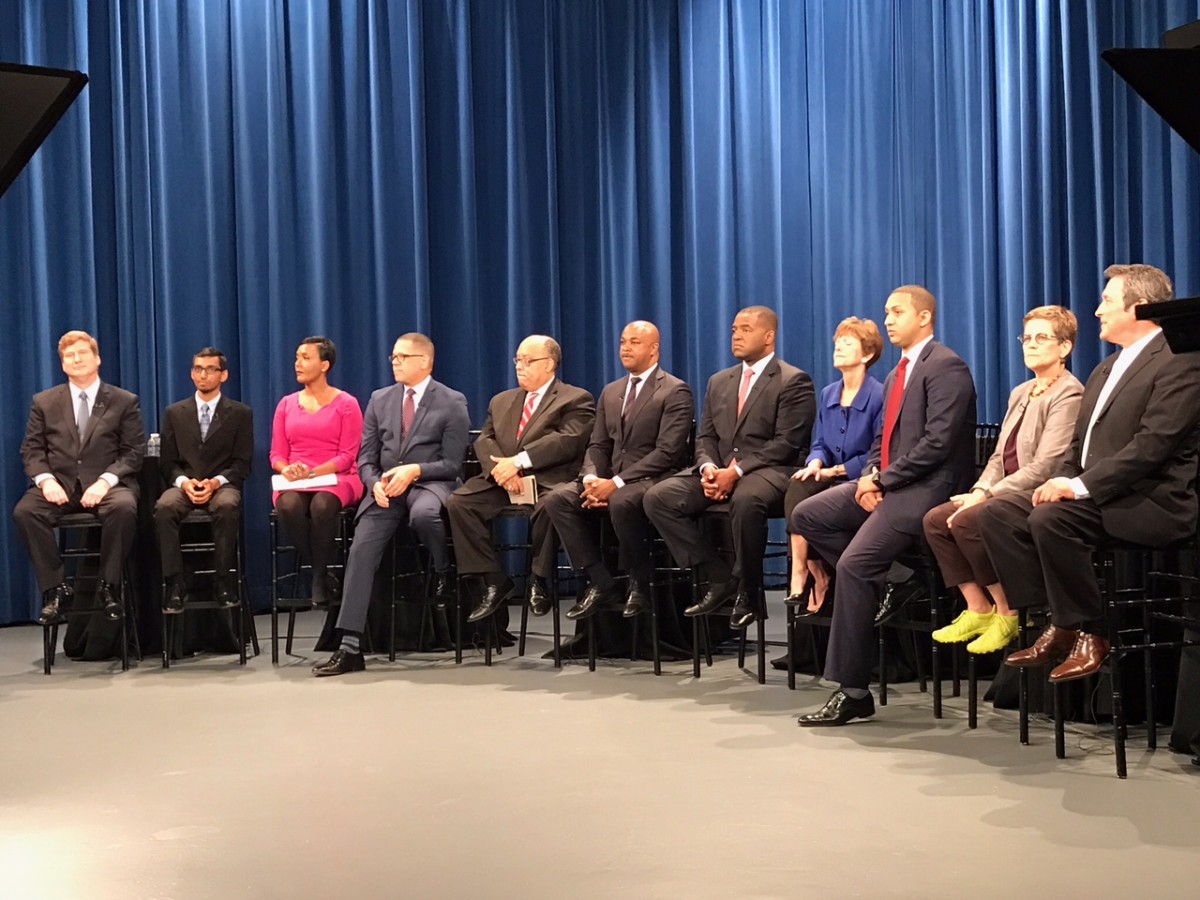 Days before early voting begins, some of Atlanta's mayoral hopefuls took a chance to ask each other some pretty pointed questions at a debate. Credit: Maria Saporta

Updated with a link to an Ethics Office letter requested by Councilwoman Keisha Lance Bottoms.

Days ahead of the start of early voting in Atlanta, top mayoral candidates are looking not just at the issues, but are going on the attack a bit in their bids to get into — and win — a runoff that’s all but certain to come.

The election comes with extra questions for the candidates who have a work history at City Hall. A federal bribery investigation has recently sent two city contractors to prison. 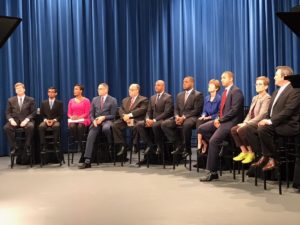 Days before early voting begins, some of Atlanta’s mayoral hopefuls took a chance to ask each other some pretty pointed questions at a debate. Credit: Maria Saporta

When the candidates met at a Thursday morning debate, they took questions from a panel of reporters but also got a chance to quiz each other.

Several candidates targeted Atlanta City Councilwoman Keisha Lance Bottoms. The debate came just after a string of big news for her campaign: an endorsement by Mayor Kasim Reed, a blockbuster fundraising quarter and a poll that suggests she’s risen out of a crowd of candidates to within striking distance of polling frontrunner Mary Norwood.

She took questions from opponents about the propriety of having received two city paychecks for a time: during part of her Council tenure, she was also executive director of Atlanta-Fulton County Recreation Authority, during the time it sold Turner Field to Georgia State University. Bottoms said she got an opinion from the city’s ethics officer that cleared her to do both jobs, as long as she recused herself from voting as a councilwoman on AFCRA issues.

Cathy Woolard, a former City Council president, said she would not have taken the second job.

Asked by Council President Ceasar Mitchell how she would vote this year if Council were presented with contracts for the PRAD Group — a company that’s been raided by federal agents, possibly in connection with the City Hall corruption investigation — Bottoms said she does not speculate on votes that are not before her.

And she fired back with her a comment to Mitchell, challenging him to release records about his political action committee.

In another verbal spat, former Atlanta COO Peter Aman and current Councilwoman Mary Norwood aimed at each other over responsibility for corruption at City Hall.

Aman, in a long preface to a question to Norwood, said that contracts go to Council for approval. Referring to a comment she had made at an earlier forum where she appeared to distance Council from contracting, he asked her if she was trying to avoid responsibility or did not realize Council’s approval role.

Norwood said that what she meant is that Council doesn’t know all the bids or see all of the responses to city requests for proposals. She in turn countered that one of Aman’s duties as COO was to oversee procurement.

Aman said that he did not have any role in the vendor selection process, meeting vendors or scoring bids. He has described his procurement role as a bit of a formality, as signing off on contracts after decisions by city staff and City Council.

But broadly, the candidates agreed that the city procurement process needs an overhaul.

Councilman Kwanza Hall called for an audit and review of every city contract or person affiliated with a contract in the city. He also said as mayor he’d put everything about contracts online.

For the candidates who have little or no connection to City Hall, the tone was strident.

John Eaves says that as chair of the Fulton County Commission, he got things done in a “corruption-free” way. He said City Hall needs a new leader to set a tone like that at the top.

Michael Sterling is a former executive director of the Atlanta Workforce Development Agency. That is a city agency, but he made a bigger point of his previous job as a federal prosecutor. He said that if Council has done the best it can do — while the city still has problems from traffic to economic immobility — then the Council incumbents didn’t deserve promotion to the mayor’s office.

Vincent Fort, a longtime state Senator, has long said that City Hall has lost its way, watching out for millionaires and billionaires as opposed to regular people.

The debate was organized by the Atlanta Press Club; video is available at its Facebook page.

Note: Reporter Maggie Lee and Saporta Report Editor Maria Saporta are both APC board members and work on its debate committee.