It’s been nearly three decades since Atlanta officials inked policies regarding certain one-time fees developers must pay to build out land. That’s about to change.

Right now, Atlanta City Council leaders and other city staff are hashing out a plan to update the so-called “impact fee program,” which utilizes funds collected from developers and directs them toward public services, such as infrastructure projects.

On Friday, during a work session led by the council’s Community Development and Human Services Committee chairman Councilman Matt Westmoreland, Atlanta officials discussed a plan to more than double the impact fees that were enacted in 1993.

Jacob Tzegaegbe, senior transportation policy advisor for Mayor Keisha Lance Bottoms’s office, said during the meeting, “The fee levels are outdated. They’re based on 1993 land use, costs and scope. A lot has changed. Land costs, construction costs have gone up.”

City officials are now tasked with ensuring that Atlanta, which has some of the lowest impact fees of similarly sized governments, adapts to account for its seemingly unending growth spurt.

As SaportaReport writer David Pendered put it in 2016:

Atlanta charges four separate impact fees. Three of the four – transportation, police and fire/EMS – can be spent anywhere in Atlanta, regardless of where they were generated. The fourth impact fee, for parks and recreation, must be spent in the district where it was collected. Three parks districts exist: Northside, Southside, and Westside.

Today, a developer building a single-family home in Atlanta has to pay $1,544. Under the proposed model, though, that fee would be $4,914. 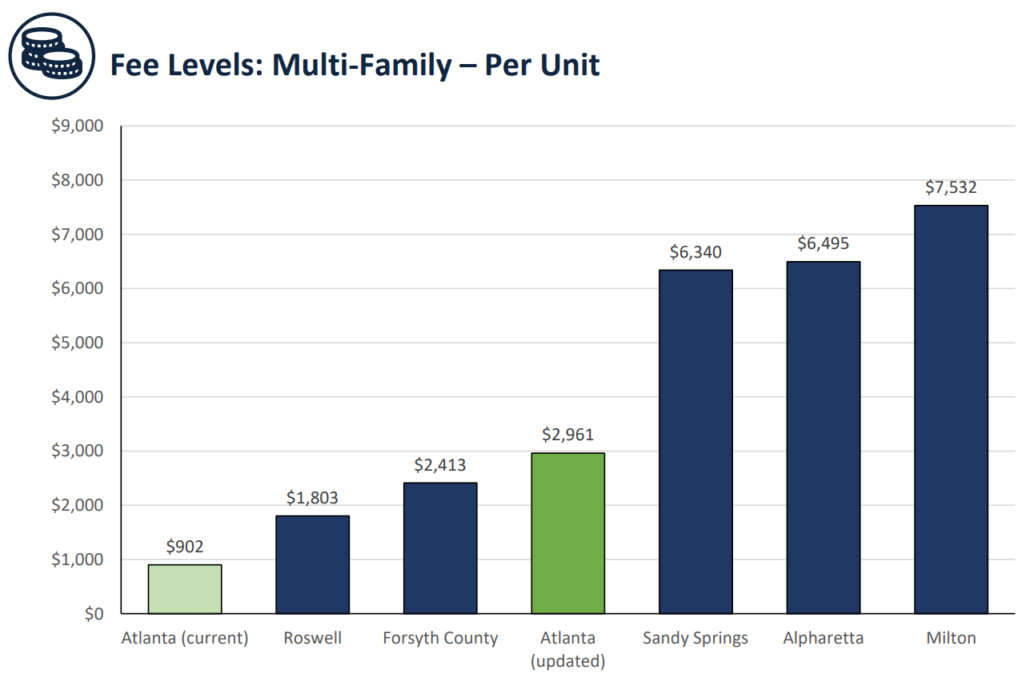 Those numbers would put Atlanta in line with neighboring areas, between the cheaper impact fees of Forsyth County and the pricier charges in Sandy Springs, according to a presentation given during the work session. 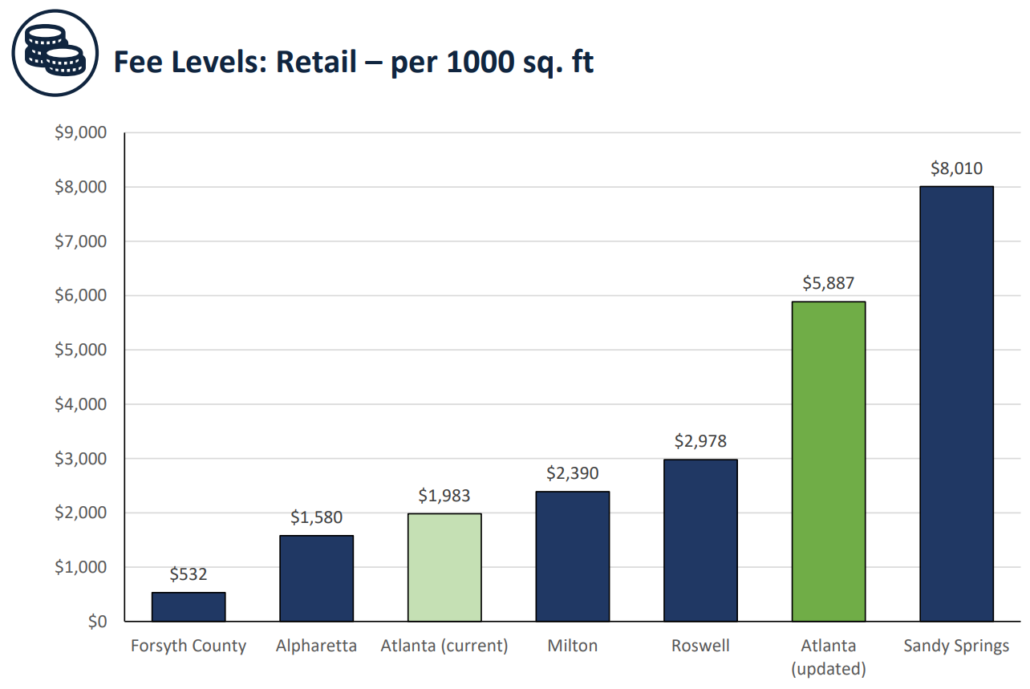 The move to raise the impact fees is long overdue, as evidenced by the fact that studies by the city in 2010 and 2017 proposed changes, and, as Councilman Howard Shook noted in a January interview with the Marietta Daily Journal, “I have been telling developers that because the fees have never been adjusted since their inception, that more than a quarter-century has gone by without infrastructure support really getting the proper amount of revenue it should from impact fees.”

The updated impact fee program could also include a provision for parks, since, as far back as 1993, parks’ impact fees have only been used to cover land acquisition. Once reforms are made, though, the fees could be used to fund upgrades to parks, too.

Among other proposed changes, the revised model also calls for closer consideration of Atlanta’s mounting housing affordability crisis. Developments that include affordable housing should be — at least in part — exempted from paying impact fees.
Per the presentation:

Additionally, the updated program would mandate that, for developers to secure affordable housing-related exemptions, they would need to guarantee the units stay affordable for at least 20 years.

Later this week, city officials are expected to launch a survey to collect feedback on the draft of the new impact fee model, and the CD/HS committee has scheduled a hearing on the matter for June 22.