By Guest Columnist LEON EPLAN, former commissioner of the City of Atlanta’s Department of Planning and Development

A work progresses on the Atlanta Streetcar, the city has taken a giant step towards confronting its current and future traffic problems.

Construction on the entire 2.6-mile loop will continue until the day the line is open for public travel, now scheduled for spring, 2014. By then, planning for additional lines will have already begun.

Streetcars are not new to Atlanta.  They remained in use until the end of World War II. But the shift of the public to automobiles made the streetcar business unprofitable, so all streetcars eventually were abandoned.

The arriving vehicles are quite different from our former streetcars.  The new cars will have a sleek and colorful design and will rest on a platform with wheels set on rails. 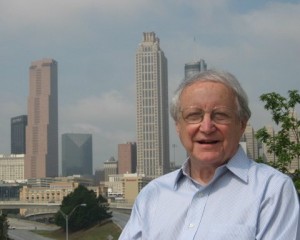 Leon Eplan in front of the city’s skyline

The rails will be embedded deep down into the pavement with their tops kept at the same level as the street.  As before, the streetcar will move at a relatively slow pace, stopping every two or three blocks.  The gantry also remains, but now, rather than being linked to numerous heavy overhead wires, it will tie to a thin, single wire. A ride will be smooth and almost noiseless, allowing for normal conversation.

Modern streetcar systems currently exist or are being introduced into more than 40 large and medium-size American cities.

With only a few exceptions, streetcars share the street with other traffic:  automobiles, trucks, bicycles and buses.  As a result, using the existing streets means that there will be little need to purchase new right-of-way, a considerable cost advantage whenever streetcars are compared with other transit systems.

To increase ridership capacity, two streetcars will be able to be joined together, making the vehicle quite long.  It is then referred to as an attenuated streetcar.  The connection between the two will be able to bend 90 degrees, allowing the streetcar to make sharp turns at intersections.

Portland, Oregon, the first city to establish a modern streetcar system, often uses such vehicles.  When at full capacity, these joined cars are capable of carrying up to 110 passengers, more than twice that of a single transit vehicle or a bus.

The common opinion in Atlanta is that the public is so wedded to their automobiles that nothing we can do will ever cause them to leave their vehicles behind.  But that has not been tested because few travel alternatives exist.

In cities where the modern streetcar has been introduced, large numbers of riders have willing switched from their automobiles to transit when given that opportunity.

One feature which a streetcar almost uniquely has, is its ability to serve as a “distributor”.   A major weakness of Atlanta’s transportation system has always been the limited opportunities for non-drivers to easily travel via transit from their point of origin to their destinations. As a result, most simply continue to remain in their cars and drive to work.

Both the streetcar and the bus are capable of “completing that trip.”  They do this very differently, however.  The bus has the flexibility to work out routes where they can pick up transit riders wherever they are and take them to or near their destinations.  Flexibility is also the bus’s limitation as a distributor.  Bus routes are easy to change, so patrons cannot always rely on where their bus might be relocated in the future.

This is not the case with streetcars.  They must remain rigidly tied to a street with rail.    That sameness makes the streetcar dependable, which is one of its most important attributes.  A city can find no better means for attracting businesses to a corridor than to assure that service will permanently remain there.

The experience of Portland is revealing.  Within the initial 11 years of their operation, the estimated value of development along its Westside transit alignment was $2.4 billion.

Atlanta has now shed the crisis it faced in the decades of the ‘70’s and ‘80’s.  During those years, its population declined by over 100,000 residents.  Since the mid-1990, however, the city’s population has steadily increased, partly due to the “spark” unleashed by the 1996 Summer Olympics.

Atlanta is expected to continue growing. The Atlanta Regional Commission projects that the region will add another one and a half million people by the early 2030’s.

Where will these people live?  The recent 2010 census indicates a slowdown of growth in the region’s outer counties while counties and cities closer to the center, like Atlanta, are experiencing increased growth.

As comforted as Atlanta may be with a robust projected future, the city’s population and commercial growth is already being accompanied by large increases in public service demands. That includes many more trucks negotiating our scrambled street patterns as well as newcomers who, having no alternative, are bringing their cars with them.  Last year, the region registered an additional 13,000 cars. This will continue year after year.

The laying of new rails for our first modern streetcar, expected to begin within the next several months, could not be more timely. A comprehensive streetcar system will still be needed to help us contend with our future growth.

But for now, it looks like we are at last putting our small toe into a large pond.  We need to grab onto the change that is before us.

Leon Eplan served two different times as the city’s commissioner of planning and development. He also is a former director of the Graduate Program (now School) of City and Regional Planning at Georgia Tech. Eplan also was the principal director of the Atlanta Peachtree Corridor Streetcar Feasibility Study.