Atlanta's Oakland City is a designated historic district, where changes to the exterior of properties may proceed only with approval from the board that oversees the Urban Design Commission. Credit: David Pendered (2018)

Construction in Atlanta’s historic districts is set to resume after a pandemic-related shutdown.

The city’s historic review commission is slated to vote today to approve – as expected – rules to convene virtual meetings that will enable it to proceed with the issuing of permits. Two special meetings have already been scheduled to handle the apparent backlog of applications that’s accumulated since March to work on properties located in historic districts. 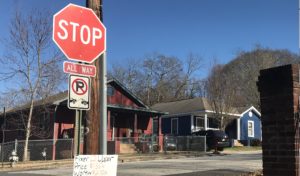 Atlanta’s Oakland City is a designated historic district, where changes to the exterior of properties may proceed only with approval from the board that oversees the Urban Design Commission. Credit: David Pendered (2018)

The move is the latest of efforts by Atlanta’s Planning Department to maintain the rate of construction and development in the city during the COVID-19 situation.

Motives for fostering the construction industry include jobs for construction workers – plus the pipeline of lawyers, bankers, architects and designers, and suppliers – as well as future increases in the city’s tax.

However, these relief efforts have not removed the roadblock in Atlanta’s historic districts.

In these historic districts, any work proposed on the exterior of a property must obtain from the UDC a Certificate of Appropriateness to ensure the changes are, “in keeping with the historic character of the building or district,” according to a description of the UDC’s operations.

Atlanta’s Urban Design Commission has called a meeting today, Wednesday, for 4 p.m. The only item on the agenda is a set of procedures for conducting vitural meetings.

The board has not met since March 11. At it’s March 25 meeting, the board was slated to consider 14 items on its agenda.

Proposals that have been in limbo since the cancellation of the March 25 meeting include the planned expansion of Paideia School, in the Druid Hills Landmark District, and the deaccessioning, or decommissioning, of public art as proposed by the city’s Office of Cultural Affairs. The agenda cites these addresses for the artwork:

The only item on the agenda of today’s meeting is the proposed adoption of rules and procedures to govern virtual meetings. No applications are to be considered, according to the agenda.

The UDC’s board stopped meeting after the March 23 executive order by Mayor Keisha Lance Bottoms. Executive Order 19 postponed the convening of all, “boards, authorities, commissions, committees, or other similar bodies” until the Atlanta City Hall and other public facilities are reopened to the public.

The UDC has scheduled special call meetings for July 29 and Aug. 5, evidently to catch up with the pending applications.

The agenda for the July 29 meeting is full and no more applications are being accepted, as is the agenda of the Aug. 5 meeting. July 14 was the deadline for applications for the Aug. 5 meeting and they were accepted only via the Planning Department’s newly implemented digital permitting process, according to a report on a city website.

The proposed rule changes to allow for virtual meetings consist of 11 measures. Six measures address public participation in the meeting and the course of action if the public feed is lost or a participant is disconnected. Two main points observe:

“If the meeting feed cannot be reconnected, the Chairperson will adjourn the hearing.