The top executive of the Atlanta Streetcar said an audio message recorded a year ago will be played on the streetcar to advertise shops along the route. 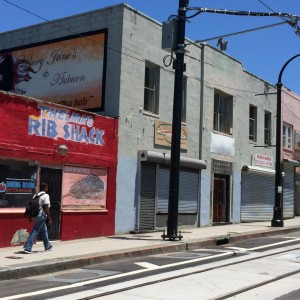 Thelma’s Rib Shack is one of a few businesses still open along this section of Auburn Avenue, near the Downtown Connector. Credit: David Pendered

Tim Borchers, the streetcar’s executive director, described the audio message after Atlanta City Councilmember Ivory Lee Young, Jr. asked him how the city can help shopkeepers regain business they claim to have lost during the construction period that started in February 2012.

Young’s questions raise the issue of how the city can help mom and pop businesses capitalize on the potential of the Atlanta Streetcar.

The streetcar has long been portrayed as an economic bonanza for development and overall trade in adjacent neighborhoods. But there’s been little discussion of exactly how small businesses can position themselves to benefit from the streetcar’s passengers.

Borchers responded to Young’s question: “An audio package was recorded a year ago [and] it includes Sweet Auburn.”

In addition, Borchers said, the city is deciding whether to display ad cards on the vehicles. The idea of the ad cards, Borchers said, is to inform passengers about destinations such as: “At stop No. 4 is the Waffle House.”

Young raised the issue of advertising in a round of questions he asked Borchers during Tuesday’s meeting of the council’s Utilities Committee. Young ask how the city can help merchants recover after their business has been disrupted by construction of the Atlanta Streetcar. 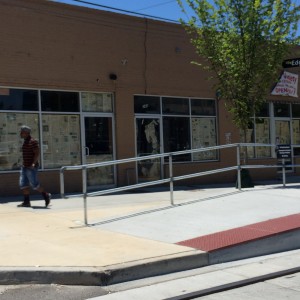 Though the sidewalks are inviting, storefronts are vacant along this stretch of Edgewood Avenue next to the Atlanta Streetcar. Credit: David Pendered

Young asked Borchers to describe how the city will promote businesses along streetcar route. Shopkeepers say business has plummeted during the two-years-and-counting of construction

“Will those efforts including marketing to the businesses?” Young asked. “Not just at stops, but along the corridor itself. As we ride the train at the airport, we know audibly that we’re at ‘this’ stop and at ‘this’ stop we can go to Concourse A, or B, or whatever. Will there be marketing to let folks know what’s at the stops?”

Borchers responded by citing the audio message recorded in 2013.

Young began his round of questions by posing a general question about how the city can bolster businesses.

“How should I put this?” Young said. “In your experience, what do you feel that we could to do be responsive to the route, with regard to many of the businesses who are now trying to reengage in commerce along this row.”

Borchers responded: “I’m not trying to be funny, but to get open as soon as possible.”

Borchers hastened to add to his response by describing the day when the streetcar whisks visitors and downtown regulars to stops between the Martin Luther King, Jr. National Historic Site and Centennial Olympic Park. 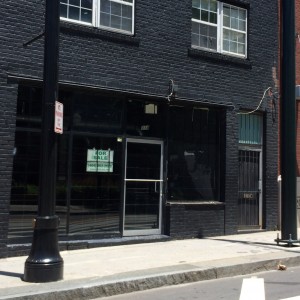 Shuttered storefronts, such as this one along Auburn Avenue, are expected to benefit from passengers brought by the Atlanta Street car. Credit: David Pendered

Federal and local documents said the streetcar was to be functional in 2013. The federal government announced its funding for the project in October 2010. Borchers said the new target date is as early as four months from now, or around Thanksgiving.

In August 2012 the Atlanta Streetcar released a fact sheet that gave this time frame:

In April 2011 the Federal Transit Administration released a document that gave this time frame:

Various councilmembers have consistently pressed the administration for some sort of relief for shopkeepers who see customers turned away by construction workers.

At one point, Public Works Commissioner Richard Mendoza told a council committee that the administration is helping restaurant owners by conducting meetings over lunch in assorted restaurants located in a construction zone. 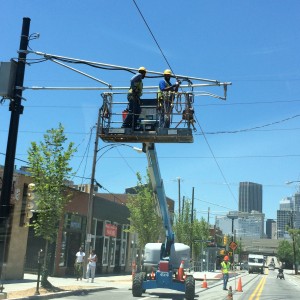 Utility workers put the finishing touches on the power lines of the Atlanta Streetcar over Edgewood Avenue on Wednesday. Credit: David Pendered