Atlanta Streetcar: Opening date in 2013 may be slipping away

The Atlanta Streetcar appears increasingly unlikely to open in 2013, according to an update Atlanta’s public works commissioner presented Wednesday to the Transportation Committee of the Atlanta City Council.

Commissioner Richard Mendoza did not provide a direct answer to this question from Councilmember Yolanda Adrean: “When will you get the streetcar up and running?”

Mendoza said track construction will take up to 16 months after the first utility cut was made, this past summer. Just 30 percent of the requisite utility work is complete and as for its final completion date, Mendoza said: “I don’t have that information.”

Mendoza’s presentation was supposed to be on the impact the streetcar project is having on businesses. He explained the city is working diligently to mitigate the project’s impact on businesses.

Committee Chairman C.T. Martin pressed Mendoza on reports that some businesses contend they are losing money because customers can’t easily get to the shops and restaurants.

Mendoza said the city is aware of the issue, and is acting on three remedies: Encouraging construction companies to advise workers to patronize the shops; keeping the street fronts and sidewalks of shops as unobstructed as possible; and conducting meetings in affected restaurants whenever possible. 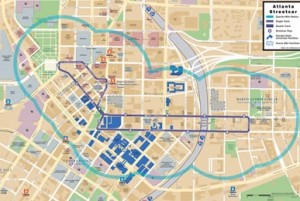 But first, here are some dates to remember:

Mendoza had already explained to the Transportation Committee that 16 utility companies are at work along the streetcar corridor, including Georgia Power and AT&T. Traffic controls are in place, and weekly meetings are convened to coordinate all the efforts, he said.

“We’re finding that as we go out there, we discover more issues we were not aware of,” he said. “It would be hard for me to put a specific date on completion of the utility work.”

Mendoza said about 30 percent of the utility work is complete.

“We anticipate having it done in advance of all streetcar construction,” Mendoza said.

Track construction will last “12, 14, maybe 16 months” after the first cut for utility work. The first such cut was made last summer, he said.