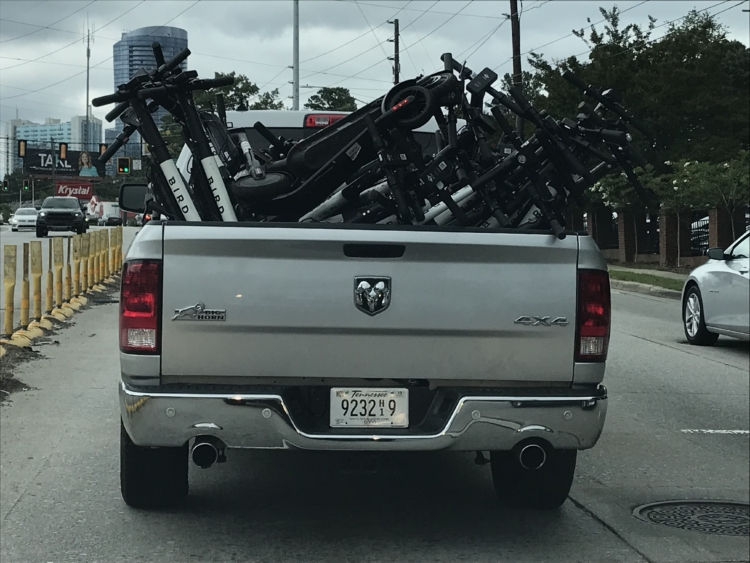 The scooter and E-bike business that's subject to greater regulations from Atlanta includes the gig economy of gathering vehicles at the end of day, charging and putting them back on the curb the next day. Here, a truck with a Tennessee tag works as a charger in Buckhead for Bird. Credit: David Pendered

Now with an estimated total value of $5 billion, the two big companies that rent scooters in Atlanta have become their own global force of nature. Yet to be determined is how Bird and Lime will respond to regulatory efforts such as the one imposed by Atlanta Mayor Keisha Lance Bottoms. 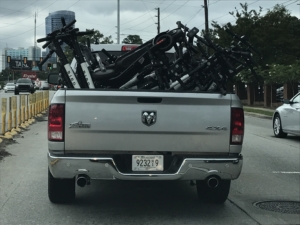 The scooter and E-bike business that’s subject to greater regulations from Atlanta includes the gig economy of gathering vehicles at the end of day, charging and putting them back on the curb the next day. Here, a truck with a Tennessee tag works as a charger in Buckhead for Bird. Credit: David Pendered

The rental scooter and E-bike business is booming worldwide in an advance led by Lime and Bird – reports estimate their market value has doubled since Summer 2018. This rapid growth suggests the companies’ primary focus is gaining market share in the U.S. and abroad.

The measures imposed by Bottoms will provide an opportunity to evaluate how the companies will seek to negotiate with a city government that oversees a scooter and E-bike market the size of Atlanta – the city reportedly has issued about 12,000 scooter permits.

The challenge of navigating municipal regulations already has been cited by one investor quoted in a report in techcrunch.com. Following Sequoia Capital’s investment last month in Bird, a Sequoia partner commended in the techcrunch.com story Bird’s management skills – including “city-level regulatory affairs.” A partner at Bird investor Bain Capital was quoted in a story in observer.com saying she anticipates regulators will create a system for limiting the number of permits issued to each operator.

The individuals who are paid to charge the vehicles are another constituency for Atlanta negotiators to consider. The nightly rate to collect, charge and distribute the next day scooters ranges from $5 to $12 per scooter, according to a Lime official quoted in a report by ridester.com.

The test in Atlanta of this emerging industry is looming.

The mayor announced on Aug. 8 several reforms for the scooter rental business. A statement from her office portrayed the measures as an effort to respond to the deaths of four scooter riders who were struck by vehicles.

For starters, the mayor ordered a ban on the rental of scooters and E-bikes every day from 9 p.m. to 4 a.m. In addition, the city plans to take until February 2020 to revise its process for allowing rental companies to operate in Atlanta, according to the Aug. 8 statement released by the mayor’s administration.

The mayor observed in the statement: 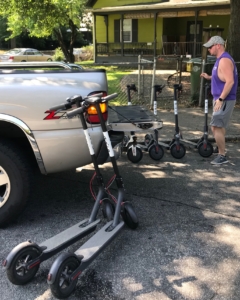 Scooters have created an industry that includes a group of chargers who collect scooters at night, charge them and replace them on the street for use the next day. Credit: Kelly Jordan

Meantime, Bird and Lime seem to be defying gravity.

Lime alone claims to operate in more than 100 areas located in 15 countries across five continents.

Both companies are privately held, which means they are not required to reveal their financial and fiscal positions, as do publicly traded companies.

Lime announced in February that a Series D round of financing valued the company at $2.4 billion.

Bird in July raised Series D financing that valued the company at $2.5 billion, according to a July 22 report by industry tracker techcrunch.com. The company declined comment, according to the report.

Lime and its most recent investors announced the identity of backers. One household name is the firm Andreessen Horowitz, known for investments in Twitter, Facebook Groupon, Airbnb and Lyft. This is how Lime characterized investors in the $310 million Series D financing:

For Bird, the company itself declined comment on the identity of investors in the July round of financing.

One reported investor – Sequoia Capital – posted a report on linkedin.com in September 2018 under this headline:

The most important player appears to be the local government – and a mix of technology – to regulate the use of scooters and E-bikes, according to the investor, who observed:

Atlanta to take a few weeks to consider rules on the shared vehicles that some cities call a nuisance
Maggie Lee June 1, 2018 5:44 pm