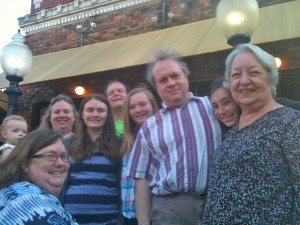 Forty-one years of Everybody’s Pizza will end Tuesday March 19 when the Druid Hills restaurant closes, and scores of longtime customers have been streaming in for their final fix, circling back to a place on the North Decatur roundabout that has been a hub for family milestones, and to say goodbye.

Shelly and Jeff Legato drove from Athens Saturday night to pay homage to her neighborhood restaurant growing up and the spot where he proposed in 1996. From their marriage came daughter Stefanie and granddaughter Heidi; also along for the evening was their fourth generation, Shelly’s mother, Kelly McGlaun-Fields.

For longtime customers like this family, the unpainted brick restaurant on the corner of North Decatur and Oxford Roads, with the yellow awning and the throwback façade, the faux gaslight outdoor lamps and the fountain in front, is the last tangible connection to a past that otherwise exists only in their memories.

“This is all so very sad,” Legato said.

Her party of nine included a friend from Druid Hills High School, Lara Alexander Williams, and her husband and two daughters.

“I hope they’ll give us our old booth,” said Williams, pointing through the window at the place where she and Legato practiced what they’d learned in language class, attempting to fool the waiters into thinking they were French. 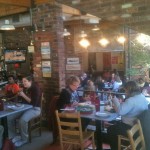 The quirky brick storefront of Everybody’s is a landmark at North Decatur and Oxford Roads, where for 41 years the restaurant has served pizza and memories.

After owner Andy Kurlansky announced a couple of weeks ago that the eatery would close, Everybody’s emotional pull has transformed the restaurant into long lines, full parking and staff too busy to look for other work. During a lunchtime rush last week, Kurlansky was asked if he was planning a special sendoff for the restaurant he co-founded in 1972.

“Are you kidding?” he said. “We’re too busy. Everybody’s working their butts off.”

Kurlansky said that after his announcement about closing, he’s seen lot of faces he doesn’t recognize. “These are not regulars,” Kurlansky said. “Some of them are them are coming from pretty far away.”

Many are coming back because something important in their lives is linked to this spot. Emory graduate student Claire Fitzgerald is one. A resident of Utica, N.Y., Fitzgerald has eaten at Everybody’s once a month for the past five years. She and her faculty advisor, Gay Robins, meet to discuss her dissertation on ancient Egyptian tombs.

Like every time before, they ordered pizza salads and Coca-Colas. Only this time was the last time. Fitzgerald is scheduled to defend her dissertation on May 1. 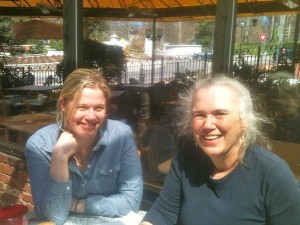 Claire Fitzgerald, a doctoral candidate in Egyptian art history at Emory University, and Gay Robins, her faculty adviser, have met regularly at Everybody’s for eight years to discuss Fitzgerald’s dissertation on ancient Egyptian tombs. Fitzgerald has flown to Atlanta from upstate New York once a month for five years for those meetings.

“We look at this as our office,” said Fitzgerald. “I decided I had to finish now because we won’t have our office anymore. This is our last meeting.”

“Everybody’s has always been an anchor,” said Robins, with a smile that seemed both wry and completely sincere. “It’s always been a certainty through uncertain times.”

While every other business that operated in the commercial pocket known as Emory Village in 1972 is closed, Everybody’s managed to survive.

Bob and Sara Calvert came here on dates in the mid-1980s, and couldn’t find any place they recognized except for Everybody’s.

“All the places we used to hang out are gone,” said Bob Calvert, mentioning the Fishburne Building that housed the Emory math department. His wife noted the sorority houses. These changes made Everybody’s more special—the last landmark.

Legato and Williams rattled off the names of long-gone businesses like the old Kroger, Jagger’s, Lullwater Tavern, Horton’s Drug Store.

“I got my hair dyed pink over there,” said Legato, pointing to the site of a former beauty salon.

McGlaun-Fields, 73, offered this bit of folklore about an infamous resident of a nearby nursing home. The resident would break out of the home frequently, always ending up in the same place: a booth at an Emory Village restaurant owned by a family member.

Not everyone was wistful about Everybody’s closing. Some patrons were just peeved. Now where would they take large groups, where alcohol is served?

“I don’t know where we’ll take (guest) speakers,” said Michael Reddish, an Emory graduate student in chemistry who was having lunch with classmate Caitlin Davis. “It’s the only place with a bar.”

Brian Boust, a local record dealer, suggested Everybody’s closing was a sign of something more nefarious at work. Within two blocks of the restaurant, two Starbucks now operate. He expects more chains, fewer “mom and pop” businesses. “In that sense it’s a bit upsetting,” Boust said.

Kurlansky, an Emory graduate, said high rents aren’t driving him out. He acknowledged that the recession had taken a bite out of business as did construction of the roundabout, but that Everybody’s had rebounded. Four decades of pizza baking has tapped his stamina. “I’ve been doing this for 40 years,” he said. “I’m just plain tired of it.” 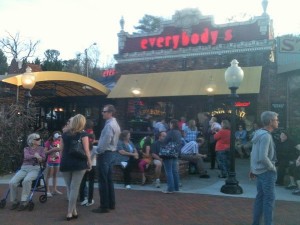 Everybody’s pizza restaurant in Druid Hills will close March 19, and longtime patrons have trekked back to pay homage.

Kurlansky declined to discuss what will happen with the space. The Alliance to Improve Emory Village announced that The Slice & Pint, a pizzeria and microbrewery created by a partner with the 5 Seasons Brewing Co., will move in.

Not everybody who wants to say goodbye to Everybody’s will get the chance. Marianne Bahnsen received an online message from her son, Ryan, a serviceman stationed in Afghanistan who was scheduled to return home in August.

“I’m really craving a salad at Everybody’s,” he wrote.

Then he learned about the closing. His next message was concise.

Ben Smith is a freelance writer based in Decatur. He can be reached at benzmyth@gmail.com.