Atlanta’s airport again has links to its roots in fast cars, racetracks 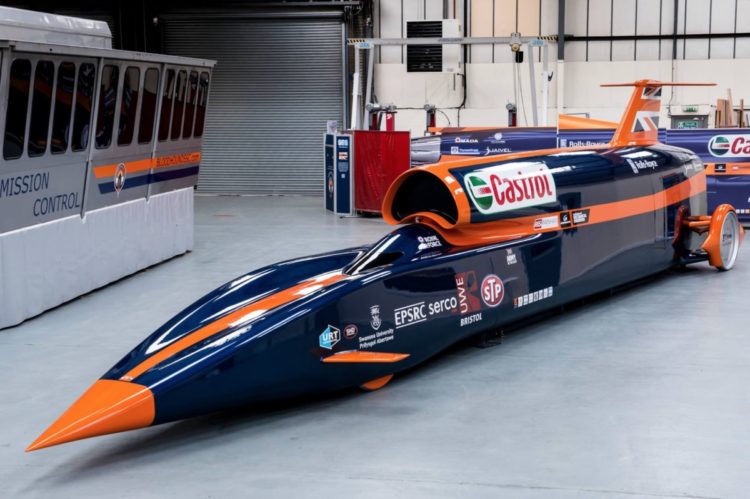 The car being built to set a world land speed record of 1,000 mph is transported by an air cargo carrier that's about to sign a lease at Atlanta's airport, which was built on the site of a former car race track. Credit: magmontres.fr

Note to readers: This story has been updated to note that CargoLogicAir expects to expand its services at Atlanta’s airport.

Atlanta’s airport is built on the site of a former car racetrack. The airport again has a link to fast cars – a cargo company that’s poised to sign a five-year airport lease is a sponsor of the global effort to build a car that is to smash the 1,000 mph land speed barrier. 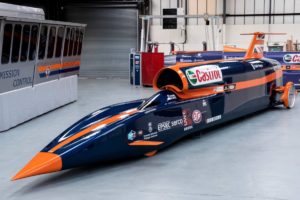 The car being built to set a world land speed record of 1,000 mph is transported by an air cargo carrier that’s about to sign a lease at Atlanta’s airport, which was built on the site of a former car race track. Credit: magmontres.fr

CargoLogicAir is the cargo airline partner of Bloodhound SSC. Bloodhound was established to set the world record for land speed at 1,000 mph. Bloodhound holds the current record of 763.035 mph, set in the Nevada desert on Oct. 15, 1997.

Bloodhound backers say their motivation involves more than world records – children are at the heart of their effort. According to one self-description of the project: “The primary objective of the BLOODHOUND project is to inspire children in STEM subjects,” as in, Science, Technology, Engineering and Math.

Bloodhound backers feel confident they are on the right path toward setting the record.

In tests held in England in October 2017, the car ran for the first time at speeds above 200 mph and systems performed as expected.

The next step is a test this October or November in South Africa’s Kalahari region. The target speed is 500 mph on a specially created racetrack at Hakskeen Pan, South Africa. The team views the 500 mph goal as a milestone on the journey of setting a new land speed record. The car’s breaking parachutes and desert wheels also will be tested.

Spectators can attend the three-day, two-night event for package rates ranging from about $3,800 to $7,900, plus travel. Bloodhound offers this heady sales pitch: 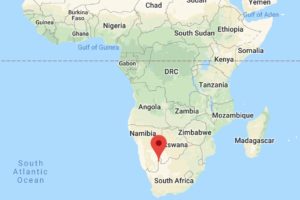 Bloodhound plans to test its vehicle at a racetrack in South Africa’s Kalahari region. The goal is for the vehicle to reach 500 mph. Credit: bloodhoundssc.com

Green, the driver, is a rock star in this rarefied realm of speed. He’s a former fighter pilot with the Royal Air Force who climbed into the cockpit of a 10-ton vehicle powered Rolls-Royce Spey turbojet engines that generated 50,000 pounds of thrust to set the current land speed record.

“It’s a popular misperception that driving a land-speed record in a straight line is about anchoring the steering wheel, plotting your foot to the floor, and just waiting until you run out of fuel. If only it were that simple,” Green said in a video posted on a report by autoblog.com.

The car started jerking around as it picked up speed at a rate of 25 mph per second, Green said.

“The wheels are now skimming across the surface, the shock waves are now generating uneven forces, gusts of crosswind, the car is sliding all over the track,” he said in the report. 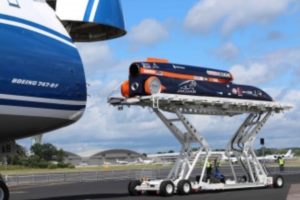 The Bloodhound speedster is loaded into the nose of a plane owned by its cargo sponsor, CargoLogicAir, which is to sign a lease for space at Atlanta’s airport. Credit: bloodhoundssc.com

The current vehicle produces some eye-popping facts and figures:

CargoLogicAir, the cargo partner of the land speed project, is a British company that was created recently as the United Kingdom’s only maindeck freight airline. The company operates a route from Stansted Airport, located about 30 miles north of London, to Mexico City International Airport via Atlanta’s airport.

The Atlanta City Council could vote as early as April 16 to authorize the mayor to sign a five-year lease with the company for operating space at the airport. The company intends to expand its services offered in Atlanta, according to an airport spokesman.