Airline passengers should find it easier to navigate their way around Atlanta’s airport once a new wayfinding system is installed in time for this winter’s busy travel season.

The $2.1 million project calls for interactive touch-screen signs to replace the existing static signs throughout the airport. The work is to be paid for by the city’s aviation fund and overseen by the consortium of airlines that manage the common areas of the airport. 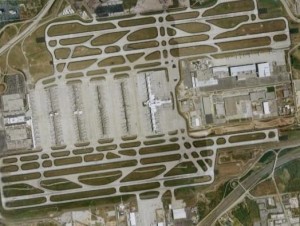 Atlanta’s airport can be as challenging to navigate on the inside as it appears from the air. Credit: wikimedia.org

“At international, they are very visible and we want to do the same thing at the other concourses,” Miller said.

The plan calls for the replacement of static signs with interactive signs in the North and South terminals, plus concourses T through E. In all, 46 signs will be replaced in the following locations:

Passengers are expected to find the interactive signs a lot easier to use than the existing static signs, according to the city documents that accompany the proposed change of signage.

For example, the interactive signs allow passengers to look up information from any location in the airport, whereas the current static signs are location specific. The interactive signs also will present information than is more current than some of the existing static signs, in terms of changes in terms of the locations of various shops and restaurants.

The interactive signs also provide benefits for the airport officials who manage them because they are expected to be less expensive to maintain, and faster to update, according to city documents related to the proposal.

“Depending on the concourse, I can spend more time finding a directory than i do trying to find something else,” Moore said. “It really needs to be easier for people to find what they want to find.”

Jim Drinkard, the airport’s assistant general manager, responded that the airport and airlines were working together to address Moore’s concern.

“We’re in the process right now,” Drinkard said. “We’ve had so much customer service success in the new international terminal, where you can actually do a touch screen and change languages and so forth. … There have been so many changes in the concessions programs that it’s hard to keep those static directories up to speed.”

Terms of the proposal call for the mayor to authorize the work to be done by the Atlanta Airlines Terminal Corp. The cost will be reimbursed by the city.

The corporation entered an agreement with the city in 1978 to help with planning, design, development, construction, maintenance and operation of the common areas of what now is Hartsfield-Jackson Atlanta International Terminal. The city is responsible for the replacement of capital items.

The proposal to install interactive signs is expected to be approved June 26 by the council’s Transportation Committee. If approved, the council would vote on the proposal at its July 1 meeting.