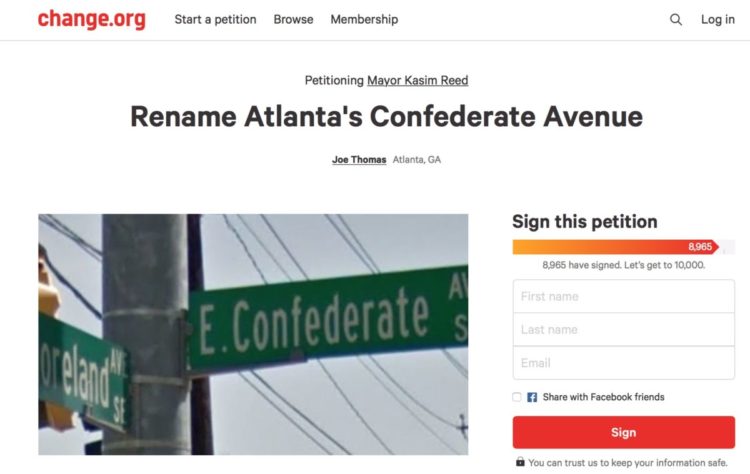 The one Confederate icon in Atlanta that appears slated for the dustbin is a street name, Confederate Avenue. In addition, Atlanta may install a sign to mark the site of a slave auction house that once stood near the present Five Points MARTA Station. 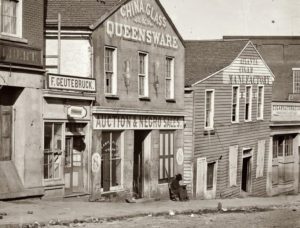 Atlanta may establish an historic marker to observe the presence of a slave auction house, that existed near the present site of MARTA’s Five Points Station. Here, a black Union soldier is posted outside the establishment. Credit: junipergallery.com

These two specific recommendations are likely to be adopted by the city-appointed panel that on Monday is slated to approve a set of guidelines, some say principles, that a future panel can use to determine the fate of Confederate icons on public land in Atlanta. State-owned properties, such as the Capitol and its statuary, are outside the city’s purview.

The panel has met just twice since it was formed in October. Several members have grumbled that the delicate discussions and decisions about Confederate icons simply require more time for deliberation. This in a city that’s home to the Carter Center and a recently opened Center for Civil and Human Rights, institutions where such discussions are given great gravitas.

However, the ground rules were set when Mayor Kasim Reed and the Atlanta City Council appointed members just six weeks ago – the panel’s decisions were due before Thanksgiving so the Reed administration and current council can take some sort of action before their terms expire. On Dec. 4, the council is slated to convene its final meeting of the current term. The council meeting on Jan. 3, 2018 will herald the city’s newly inaugurated leadership.

Of note, the issue doesn’t seem to have made a dent in the campaign rhetoric.

Reed started this process after the deadly encounter in Virginia. But neither the public nor the candidates have chosen to raise the issue of how the Cradle of the Civil Rights Movement will manage its public celebrations of the Lost Cause of the Confederate mythology.

Given the short window for action, the best approach the two co-chairs and the panelists determined they could devise was to establish a set of policies to guide the next group that the new mayor and council could convene to continue the work. 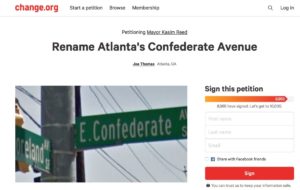 The panel’s co-chairs are Sheffield Hale, president and CEO of the Atlanta History Center, and Dan Moore, founder and director of the APEX Museum.

The likely inclusion of a recommendation to rename Confederate Avenue came as good news to Atlanta native Joe Young. Young created the online petition that had 8,965 signers as of late Sunday afternoon, notwithstanding his great-great-grandfather’s service with the Confederate States Army.

“My school bus stop was on Confederate Avenue,” Young said at the Nov. 8 meeting of the panel convened to consider Atlanta’s Confederate street names and monuments.

“There are people who are nauseated and upset that we have those street names in our city,” Young said. “We can tell those stories another way.”

Sonji Jacobs Dade is in the group Young described. She’s also a member of the panel that on Monday is to approve a set of recommendations that will be submitted to Reed’s administration.

“Every time I look at, or have to drive on, Confederate Avenue, it is deeply upsetting,” Dade said.

Dade said she also troubled by the Confederate Obelisk, located in the city’s Oakland Cemetery. The point she made in judging the monument could well find itself into the panel’s recommendations.

“When I took my daughter to Oakland and came across the obelisk, I had a visceral reaction,” Dade said. “I just do. It’s visceral. There’s not much contextualization. To me, it was romanticized.”

The obelisk marks the graves of Confederate soldiers and bears the inscription: “Our Confederate Dead. 1873 Erected by The Atlanta Ladies Memorial Association.” It was dedicated the following year on April 26, which is the anniversary of the date in 1865 that Confederate Gen. Joseph E. Johnston surrendered to Union Gen. William T. Sherman in North Carolina. Johnston led the Army of Tennessee in the early days of the 1864 Atlanta Campaign until he was relieved of command after falling back from North Georgia in the face of Sherman’s larger force.

Sheffield Hale, co-chair of the panel, picked up on Dade’s remark and observed that the flag presentation that’s part of the Confederate Obelisk monument could easily be altered.

“The flag at the bottom is a Confederate flag,” Hale said. “That is something that could easily be removed.”