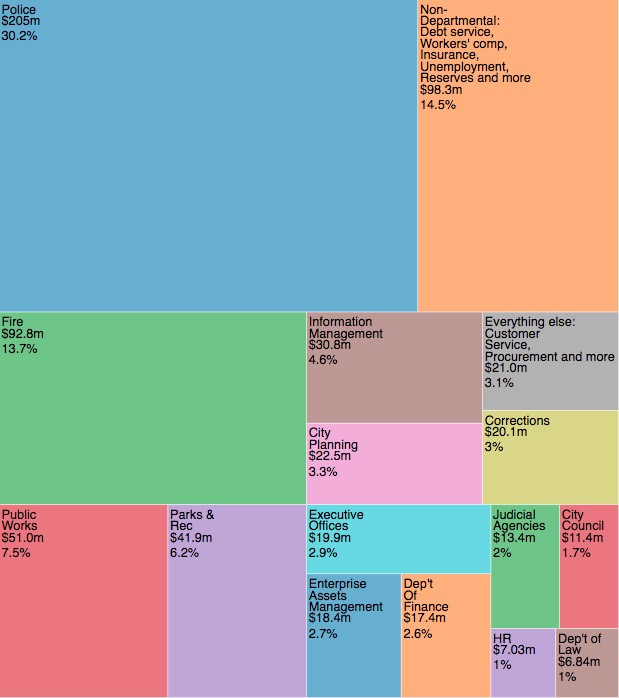 It’s the season for budget hearings at Atlanta City Council, which is going over Mayor Keisha Lance Bottoms’ draft spending plan for the year that will begin in July. Much of the annual operations money comes from, and must be dedicated to, the airport, water service and garbage pickup. After that, the next biggest expense is policing.

The large headline number near the top of Atlanta’s draft operating budget is $2,215,976,704. That money is getting paid to Atlanta from lots of places in the coming year: airport concessions, your water and garbage bills, property taxes, business licenses and more. Here’s an idea of what $2.2 billion is.

But the mayor and Council don’t get to decide how all that $2.2 billion is spent. Most of it is already set aside. The water bills you pay are set aside for waterworks. Airport revenue pays for the airport. The city and employees contribute to health insurance. And so on. Those special categories are called “funds.”

Most of Atlanta’s $2.2 billion operating budget is already set aside for the airport, water or other things

But the “general” fund, contains some of the departments you might think of when you think of a city: police, fire, reserves and things like that.  The chart below shows the breakdown of the general fund only.

This is a simplification of the budget, which is a 591-page document. These charts doesn’t include so-called Capital Projects funds, like TSPLOST — a sales tax Atlanta will collect temporarily to pay for a backlog of road, bridge and sidewalk works.  Or TADs, special districts throughout the city where an increment of property taxes goes to subsidize private development in those zones.

To learn more though, check the budget.

Or check out city budget hearings. They’re on the calendar this week. Tuesday night, June 4, Atlanta City Council has scheduled a “Virtual/Interactive Public Hearing” on the budget at City Hall. Folks are invited to call/text/tweet questions from home during the session.

Atlanta City Council is set to vote on the budget on June 17.

“Other” funds in the graph above that add up to $352 million are: Solid Waste, City Plaza, Emergency Telephone System, Fleet Service, Group Insurance, Hotel/Motel (most of which goes to the Atlanta Conventions & Visitors Bureau, the Georgia World Congress Center, and the Mercedes-Benz Stadium) and Rental/Motor Vehicle.

“Everything else” in the general fund graph includes: Solicitor, Public Defender, Procurement, Customer Service, Audit, Atlanta Citizens Review Board, Department of Ethics, and a startup appropriation for the new city Department of Transportation.

This story does not include Capital Projects funds, like Renew or TSPLOST. It’s just a simplified look at a 591-page budget.

Figures used for these graphs as .csv.