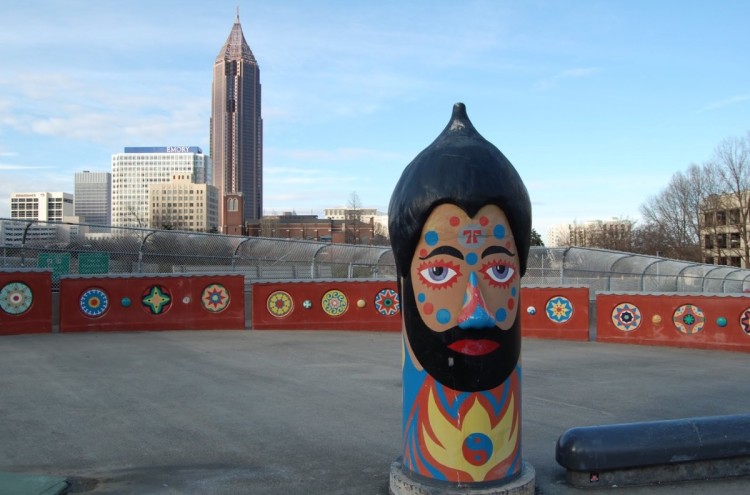 Folk Art Park aims to honor Southern folk art, in this case with an installation that pays tribute to St. EOM, who created the Pasaquan art site. Credit: http://xtremearttourists1.blogspot.com

Folk Art Park, Atlanta’s homage to Southern folk artists including Howard Finster and Lonnie Holley, is on track to be repaired and restored to its quirky beauty when the park was opened for the 1996 Summer Olympic Games. 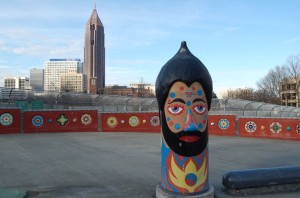 Folk Art Park aims to honor Southern folk art, in this case with an installation that pays tribute to St. EOM, who created the Pasaquan art site. Credit: http://xtremearttourists1.blogspot.com

On Dec. 3, companies interested in bidding on the project are slated to meet with representatives of Atlanta’s Department of Procurement to discuss the restoration and improvement project. Bids are to be opened Dec. 17.

Folk Art Park was Atlanta’s answer to Park Güell, the fantasyland created by the artist Gaudí in Barcelona. It was in Barcelona that Atlanta’s winning bid for the 1996 Olympic Games was announced by Juan Antonio Samaranch, president of the International Olympic Committee.

Today, the Atlanta park shows the wear of nearly 20 years out in elements, not to mention the effect of wind velocities and vibrations that result from its home on the Piedmont Avenue bridge over I-75 and I-85, the Downtown Connector.

The restoration work is not likely to be complete by next summer, when Atlanta celebrates the 20th anniversary of its Olympic Games. The company selected to do the work has a year to finish it, according to a request for proposals the city issued Nov. 17.

The park is a gateway to Atlanta’s central business district. It also provides visual entertainment to those in nearby high rise buildings. 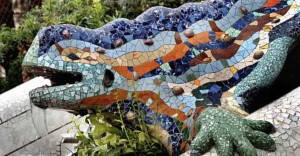 This cheerful dragon stands guard at the entrance to Park Güell in Barcelona. Credit: Barcelona.de

Regardless of the perspective, the park provides views of whimsical installations of windmills, gourd trees, and forms of animals and humans. Seven totems honor St. EOM, or Eddie Owens Martin, who created the Pasaquan art site in Marion County in the 1950s.

According to the RFP and a statement from Central Atlanta Progress, the restoration project includes the addition of:

Artwork is to be restored, as well, with new concrete, paint and metal. This effort is to be guided by the “Artwork Assessment Manual,” dated Jan. 13, 2012 and held at Atlanta Downtown Improvement District, an affiliate of Central Atlanta Progress.

Atlanta is overseeing the project to refurbish and improve the park. The current construction cost appears to be $460,000, which is to be funded by the Georgia Department of Transportation and Central Atlanta Progress are providing the funding.

However, the guiding light is an affiliate of the Community Foundation for Greater Atlanta, Inc.

The Community Foundation oversees a donor advised fund named Atlanta Public Arts Legacy Fund. APAL’s purpose is to take care of certain public art installations that date to the Atlanta Olympic Games and were part of the streetscape improvement effort overseen by CODA.

APAL applied to GDOT for money to refurbish the park. GDOT awarded $300,000 and required a 20 percent matching grant. CAP provided the match, of $60,000, and provided an additional $100,000, according to a statement from CAP.