The law of supply and demand that’s affecting affordable housing in Atlanta has an added complexity that’s arrived at the forefront: A somewhat limited supply is increasingly tilting toward higher income residents. 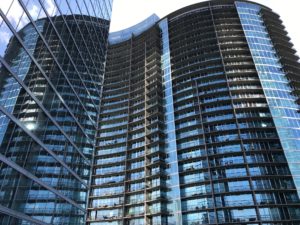 The supply of new housing built in the city plummeted after the Great Recession and has yet to recover, city budgets show. Meantime, the demand for housing has increased since 2010 because of a population growth of about 50,500, as estimated by the Atlanta Regional Commission.

Many of these newcomers can afford rents that are higher than past norms in Atlanta.

For example, the average salary of a worker in Atlanta’s burgeoning IT sector is about $100,000 a year and these folks pay a rent-to-wage ratio of about 15 percent, according to a July 2019 report by CBRE, a global real estate firm. This rate is far below the top rate of 30 percent advised by federal standards.

These folks affect housing prices because desirable properties have a ready supply of tenants who don’t need concessions to reduce their housing cost burden. Households at these sorts of income levels are absorbing residences priced lower than they might prefer because nothing more expensive is available, according to a study of the Buckhead area released Summer 2019 by the non-profit organization, Livable Buckhead, which is studying an array of issues in the area. 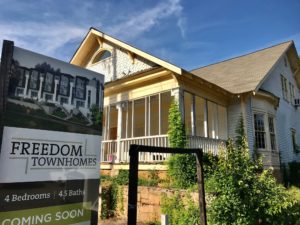 Townhome prices haven’t been made public on a proposed development on North Highland Avenue. Prices start at $850,000 for a new townhome of comparable size on nearby Ponce de Leon Avenue. Credit: Kelly Jordan

The report determined that Buckhead’s rental market is concentrated in about 13,000 units priced at monthly rates between $1,250 and $1,875. These units are deemed affordable, by federal standards, for households earning at least $50,000 a year. Because these units comprise the bulk of supply, they are the ones in demand across a range of income levels.

In terms of tracking residential construction, one method is to follow the value of residential building permits issued by the city. Permits represent a standard basis of comparison, are a consistent measurement over time, and are reported in the city’s annual budgets.

Permits record the projected value of all single family detached houses and apartments, townhouses and duplexes, and prefabricated houses – the entire waterfront of living spaces created in the city.

Here’s a snapshot residential building permit values, starting with 2007, which was the last hurrah before the Great Recession, and ending with 2018, the latest year reported in a series of city budgets: 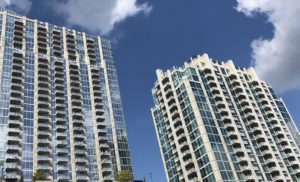 Apartment towers have become a common sight in Atlanta as renters and buyers are able to afford units on salaries common in the IT sector. Credit: Kelly Jordan 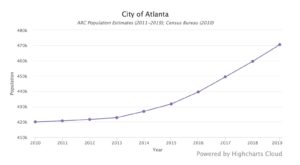 Atlana’s population has increased by an estimated 12 percent since 2010, according to the Atlanta Regional Commission. Credit: ARC

Atlanta’s budgets do not report the number of units built in the apartment structures for which permits were issued.

The city’s population has increased by an estimated 12 percent since 2010, according to the ARC. Annual increases for the first few years of the dedade were in the ranges of hundreds of individuals a year. That was the rule until 2013, when an estimated 1,100 individuals moved in during the previous year.

The inflection point arrived in 2015 to 2016. Annual increased of several thousand a year were recorded. The biggest increase was recorded in 2019, when the population had increased by an estimated 10,900 individuals. Each of whom needed a place to reside.