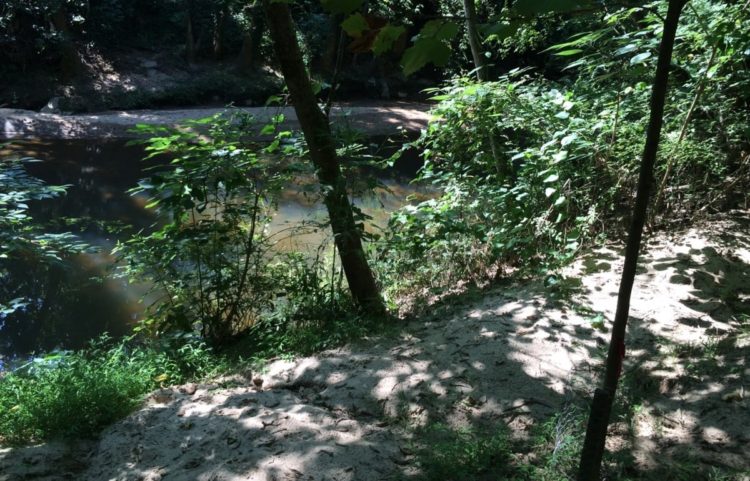 South Fork Conservancy has led a volunteer effort that has cleared nearly 3 miles of trails and more than 100 acres of land along the North and South Forks of Peachtree Creek. The trails include this one, Confluence Trail, which will connect with Buckhead. (Photo by David Pendered)

Atlanta’s own version of “The Little Engine That Could,” the classic children’s story about perseverance, is being written along the banks of Peachtree Creek. 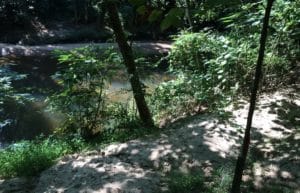 South Fork Conservancy has led a volunteer effort that has cleared nearly 3 miles of trails and more than 100 acres of land along the North and South Forks of Peachtree Creek. The trails include this one, Confluence Trail, which will connect with Buckhead. Credit: David Pendered

Nearly three miles of trails now flank the South and North Forks of Peachtree Creek. More than 100 acres of highly degraded riverine habitat has been restored since work began in earnest in 2010, when the IRS recognized the South Fork Conservancy as a full-fledged non-profit organization.

This trail network was created without major government support, as is the case with the Atlanta BeltLine. Big commercial interests didn’t launch the trail network, as is the case with PATH400. There’s no significant public private partnership, as with the Silver Comet Trail and its support from Georgia Department of Transportation and the PATH Foundation – with its $12.5 million in annual revenues and $18.2 million, in assets according to its 2015 IRS tax returns.

The trails built by the South Fork Conservancy are just that. There are no plans to pave them and flank them with development, as with the BeltLine. Success is viewed through a smaller lens. Such is the vision. 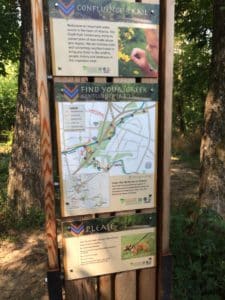 Wayfinding signs installed by the South Fork Conservancy provide information on structures that are designed so that onlookers can see if a person is standing behind the sign. Credit: David Pendered

“The trail is an extension of what we had hoped for, which is to lay lightly on the land,” said Sally Sears, an SFC founding board member and first executive director. As she spoke by phone, Sears was walking a trail and described a scene bursting with yellow, filled golden rod and bees.

“The job is convincing people that this [Peachtree Creek] is a public asset that no one has access to, unless we make it possible,” Sears said. “It’s not like we’re building an interstate. It’s nice when people walk along and go from one place to another. It’s nicer when neighbors see the creek and say, ‘I never knew that was there.’”

In the children’s story, big strong engines say they won’t even try to pull a train laden with gifts over a mountain to a village filled with eager children. Then a little blue engine steps forward, an engine built solely for the light work of switching trains in the yard. 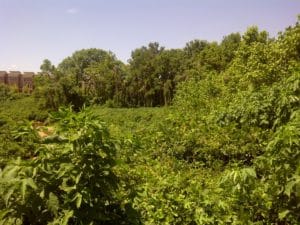 It once could have been called the Kudzu Trail, but volunteers equipped with machetes and other brush-clearing tools made what now is a clear trail, Confluence Trail, which leads to the nexus of the North and South Forks of Peachtree Creek. Credit: South Fork Conservancy

Of course, this being Atlanta’s version of the story, Atlanta’s Little Engine That Could isn’t very little at all.

The early advocates included Sam Williams, then president of the Metro Atlanta Chamber; Bob Kerr, a longtime conservationist who served three Georgia governors; Billy Hall, CEO of NewFields Companies who has worked on environmental projects in more than 70 countries; and Sears, an award-winning journalist who was looking for a new project.

From 2010 forward, the SFC’s timeline is the stuff of a children’s story.

Months after earning its IRS non-profit status, the SFC hired Ryan Gravel, of the Atlanta BeltLine, and his former firm, Perkins+Will, to document stream and trail plans into its formal Watershed Vision Plan.

Recognitions began pouring in the next year. 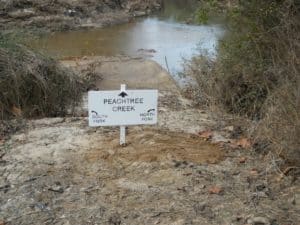 After plenty of work, kudzu and other undergrowth has been removed on the trail that leads to the confluence of the North and South forks of Peachtree Creek. File/Credit: South Fork Conservancy

In 2011, Park Pride awarded a SFC its first-ever trail visioning project. In 2012, Park Pride introduced the SFC’s efforts to a national audience at its annual conference. Later in 2012, the National Fish and Wildlife Assoc. awarded a Five Star grant to SFC for the Confluence Trail. The Georgia Chapter of the National Planning Association awarded SFC and Perkins+Will a Grassroots Planning Award for Watershed Vision Plan.

The SFC weathered the Great Recession and emerged to hire a full-time executive director in April. Among Kimberly Estep’s responsibilities is oversight of a $2 million fund-raising campaign. Its largest contribution to date was a $500,000 grant from the Kendeda Foundation.

Projects include an iconic pedestrian bridge, footpaths and other improvements that are to link the Lindbergh area, PATH400 and the BeltLine to South Fork’s existing creekside trails. Estep also is to keep that initial vision in mind, the one about laying lightly upon the land.

“It’s about maintaining all the little tendrils,” Sears said. “You have to keep the tendrils alive and nourished so you can connect them, up and down the stream.” 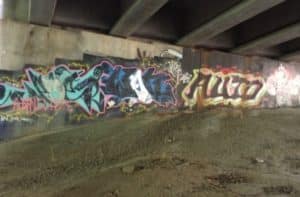 Confluence Trail offers a collection of street murals painted on the concrete structure beneath a highway. Credit: David Pendered 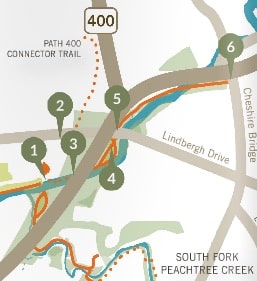