Atlanta’s Rise in ParkScore: We’re Not Done Yet

Atlanta’s reputation for its parks and recreation system is getting a lot of attention. Last week The Trust for Public Land (TPL) released the 2022 ParkScore ranking, which compares the park systems of the 100 largest cities in the US based on how they are meeting the needs of the communities they serve. Since TPL began ranking cities, Atlanta has never fared well. But this year, Atlanta vaulted from 49th to 27th out of 100, raising questions about the current state of our park system and where we are headed. View Atlanta’s ParkScore results here.

While Atlanta’s movement on the ParkScore is promising, no one has ever been satisfied with coming in 27th place. A lot of challenging work lies ahead to achieve the park system that Atlantans want and deserve.

Below, Michael Halicki (Executive Director of Park Pride) examines the categories upon which the ParkScore is built to better understand the local context of Atlanta‘s standing and identify the opportunities to progress. Then, George Dusenbury (Georgia State Director of The Trust for Public Land) frames Atlanta’s ParkScore ranking within a national context and provides insight into how Atlanta compares to other leading and peer cities.

Over the last few years, Atlanta has done big things well, adding significant acreage to the park inventory. In 2021 alone, the City opened Lake Charlotte Nature Preserve and Westside Park (among other acquisitions and expansions), making 496-acres of greenspace accessible to the community through these two projects alone. Despite these wins, the overall area dedicated to parkland in the city (6.2%) is still well below the median of the 100 ParkScore cities (19%). Atlanta’s population is exploding, and strategic greenspace acquisition of all sizes must similarly accelerate to meet the park and natural space needs of current and future residents.

The 2022 ParkScore indicates that 77% of Atlanta’s population lives within a walkable half-mile of a park, a sizable increase from 72% in 2021, and above the median for the 100 ParkScore cities, which is 75%. This is great news. While the progress made is noteworthy, however, everyone deserves to live within walking distance of a park. And we still have a distance to go to accomplish this vision.

It is not enough that Atlantans simply have access to trails and parks, though—they need to be quality trails and parks. Parks that look nice, are well maintained, and that are comfortable to be in. The City of Atlanta must appropriately fund the park budget to achieve a level of maintenance that neighborhood parks need and have so far not seen, a level of investment which is not accurately reflected in this year’s ParkScore.

According to the ParkScore data, Atlanta ranks above average in the Amenities category. The primary takeaway is clear and simple: great parks are those whose amenities meet the needs of the communities they serve. We must do what we can to ensure that as communities evolve, so do our parks.

Atlanta has work to do in terms of equity of access to parks along the lines of race and income. Data from the ParkScore indicates that:

Atlanta must do better. The Department of Parks & Recreation will soon make available to the public a park equity tool which they’ll use to ensure that investments and acquisitions are made equitably, prioritizing neighborhoods that have the most urgent need for park space and improvements. I am hopeful and optimistic that, with enhanced use of data in decision making within the department, we’ll see movement toward greater park equity in the future.

Nationally, the City of Atlanta should be very proud of its 2022 ParkScore. In moving from 49th to 27th, Atlanta was The Trust for Public Land’s biggest mover. Continuing this momentum and getting to the top means overcoming a 100-year head start by the highest rated cities. Minneapolis and St. Paul invested early and heavily in their park systems – starting in the 1880s. Washington, DC was planned in the 1790s to provide access to parks, plazas and public spaces, and benefits from its many parks owned and maintained by the National Park Service.

If Atlanta is to catch up to these national leaders, we will have to do two things. First, we must continue to invest in innovative new parks that address our acreage gap while ensuring that all Atlanta residents have access to the outdoors. The Chattahoochee RiverLands, South River Forest and Community Schoolyards, for example, will allow Atlanta to continue to improve its park system and its ParkScore.

A closer look at TPL’s Community Schoolyards program illustrates how this could be done. In Atlanta, we partner with Park Pride, Atlanta Public Schools, and the Urban Land Institute to increase access to park-like space through community schoolyards that are designed by students, teachers, and neighbors as nature-rich hubs for outdoor play, community health, and climate resilience. They are open to the community as parks after school hours, on weekends, and over the summer. TPL launched the Atlanta Community Schoolyard program in 2019, opened our first two schools in February, and will complete the ten-site pilot program within a year.

Seventy three of the 100 cities ranked by ParkScore allow some use of schoolyards to function as park-like space. The City of Cincinnati greatly increased park access for its residents by converting all schools to community schoolyards – and moved from 8th to 4th in the national rankings. Similarly, increased public investment in Atlanta could allow the pilot to expand system-wide, increasing access and providing new greenspace to tens of thousands of residents.

Second, Atlanta will have to continue to invest in “the little things.” Parks should feature amenities that meet the needs of nearby residents, and they MUST be well-maintained. Perhaps Atlanta can bring a little innovation to this core responsibility, creating job training and youth development opportunities as it expands its capacity to maintain its park and recreation facilities.

Atlanta’s progress on the ParkScore ranking is notable, but we must keep pressing forward – continuing to invest in both the large and visionary projects as well as the details. Equitable park investment across the City will ensure that all Atlantans, regardless of race, income, or zip code, can enjoy the mental and physical health benefits of living near great, quality parks. 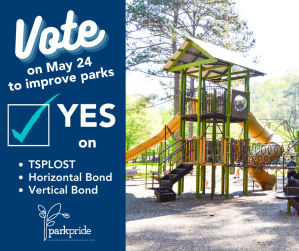 On May 24, Atlanta residents have an opportunity to move Atlanta forward on this front through the passage of three measures that will appear on the primary ballot. If passed, the TSPLOST, horizontal bond, and vertical bond measures will put $750 million toward improvements to and expansions of Atlanta’s parks, trails, and recreation centers, among a number of other infrastructure investments. We encourage you to vote YES on the TSPLOST and the bond measures. This infusion of dollars into Atlanta’s park system will maintain the momentum that’s been built for parks over the last year and help make parks and trails safe and accessible to all Atlantans.