Atlanta’s problems collecting yard waste has uncovered a host of woes in the entire system of collecting waste, just as ratepayers have received their annual solid waste bills. 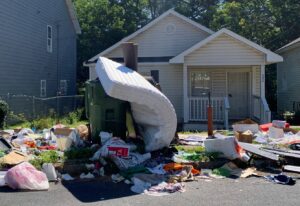 Solid waste that’s left on the curb, and not picked up in a timely fashion, tends to get picked over and scattered through a neighborhood. Credit: Kelly Jordan

Similar woes were recounted at this time last summer. In 2020, Covid-19 was blamed for staffing shortages on garbage trucks, and sluggish pickup in neighborhoods was generally accepted.

This month, members of the Atlanta City Council’s Utilities Committee were less receptive to the plea of short staff.

The concerns arose during Public Works Commissioner Al Wiggins’ presentation of the plan by Mayor Keisha Lance Bottoms’ administration. To offset the staffing shortage, the scheduled collection of yard waste will be reduced from once a week to twice a month. Committee members used the moment, at the July 13 meeting, to air a host of other waste-collection concerns less than five months before all city posts are up for election.

For starters, neighborhood volunteers were left to pick up furniture and other household debris that was dumped on a neighborhood’s street.

“I’m talking about a location in Oakland City, where someone dumped two blocks of debris over the weekend,” Atlanta City Councilmember Cleta Winslow said. “People are dirtying our city with trash. Until we start prosecuting these people and putting them in front of a judge and fining their behind, well, we’re just going to have to fine them and put them in jail. I’m sorry. I’m done. But I’m upset.” 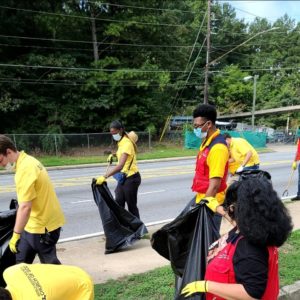 Atlanta City Councilmember Andrea Boone (bottom right) coordinated a group of about 120 volunteers in September 2020 to pick up trash along Martin Luther King Jr. Drive. The city’s understaffed sanitation department was unable to pick up street debris during the height of the coronavirus pandemic, and the situation is somewhat unchanged. Photo provided by Andrea Boone

Entire streets have been skipped by trash trucks, and a truck that finally did arrive picked up the bin of only the household that called for service.

“I’m receiving reports that only that one can, that made it through the reporting system, gets picked up and the other cans on the street are left behind,” committee Chairperson Natalyn Archibong said.

Folks who apply for a job on a trash truck – which once was a coveted position because of a steady paycheck and benefits – have to wait 10 days or more to be hired.

“They have people who want to be hired, and need to be hired immediately because we are in a crisis,” said Councilmember Andrea Boone.

Ratepayers have not been notified of how they will be compensated for paying a for a service they’re not going to receive for the foreseeable future – weekly collection of yard waste.

“What do we do about services constituents paid for, and is there any recompense for them?” asked Councilmember J.P. Matzigkeit. “I just paid my bill, $400 and some dollars. Is that bill for every-week service? I would like to hear from the Law Department about how we handle this.”

Atlanta City Attorney Nina Hickson said the situation is being evaluated. Once the administration reaches a decision, that information will be provided to the council.

Finally, in a comment that actually started the conversation, Wiggins mentioned the challenges facing the sanitation workers who are collecting waste. 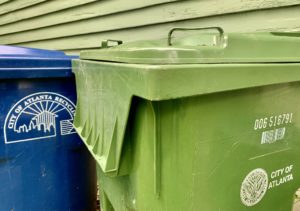 Some Atlanta trash collectors are working seven-day weeks to help keep up with the demand for collections, the public works commissioner said. Photo illustration: Kelly Jordan

“Injuries are on the rise. Snake bites. Due to fatigue from the work hours,” Wiggins said.

Wiggins has been in the job since March 1. Wiggins replaced James Jackson, who now directs the public works department in Topeka, Ks.

Wiggins said the staffing problems have resisted attempted solutions that have included a hiring blitz and calls to staffing agencies.

Those efforts have fallen short, in part because applicants who expressed interest failed to appear for an interview, and staffing agencies can’t provide the worker’s compensation as required by the city. Creative solutions include folks working outside their normal tasks, Wiggins said.

“We’ve used office staff to drive trucks, do field inspections, to fill roles that are not part of their normal job description,” Wiggins said.