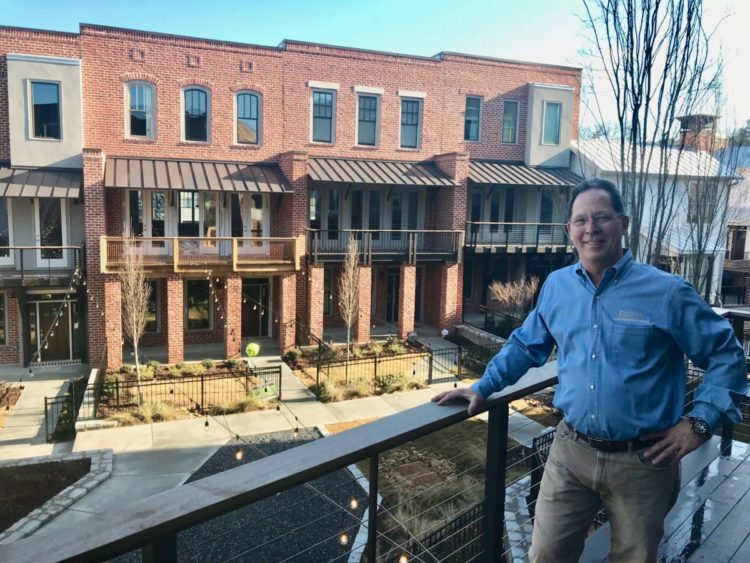 The street frontage is less than 400 feet, but the transformational potential is enormous for a future townhouse development along Donald Lee Hollowell Parkway. This is the first major private investment west of the Mercedes Benz Stadium that isn’t part of the redevelopment program for stadium neighborhoods. 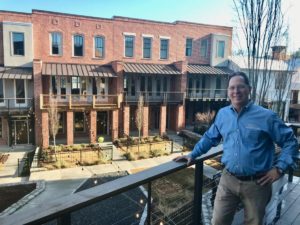 It’s hard to overstate the significance of The Finley. Just 15 years ago, the corridor that shares the name of Howell Mill Road and Marietta Street was the end of the world when it came to development trying to stretch west from the borders of then-new Atlantic Station.

But nothing of magnitude took root west of Joseph E. Lowery Boulevard or south of CSX’s Tilford Yard and the CSX/Norfolk Southern rail corridor.

Steve Brock, namesake of Brock Built Homes, has been pioneering in Atlanta’s Westside for nearly 20 years. Brock brought the Adams Crossing neighborhood to market at a time everyone knew the region was a generation away from being acceptable to the buyers who were attracted to neighborhoods such as Kirkwood and East Atlanta.

Those homes in Adams Crossing, which sold initially for less than $200,000 each, are now selling at well over double their early prices. 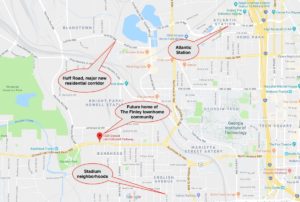 The Finley townhome community is to be the first major private investment in a generation along the blighted Donald Lee Hollowell Parkway corridor. Credit: Google Maps, David Pendered

Brock also has helped build a new mini-city on the site of nearly 1,100 razed apartments that comprised the Perry Homes public housing project. Perry Homes was a hotbed of drug dealers and wannabe gangsters who terrorized project’s law-abiding residents. The Atlanta Housing Authority decided some 15 years ago to tear it down and start over with a mixed-income community. Brock and Columbia Residential, headed by Noel Khalil, have created award-winning developments on the site.

Brock said Monday the Hollowell corridor is ripe for developers like him, as well as for buyers with an appetite to be first generation residents of an emerging neighborhood.

“There’s enough momentum of other projects in the area that we can step out and make this a success,” Brock said. “We like to be the leading indicator, the pioneer in the area.”

As Brock walked around the site and drove around the neighborhood, he highlighted attributes including views of the skylines of Midtown and Downtown Atlanta, and an out-of-use railroad spur that runs behind the property. MARTA’s Bankhead rail station is about a half-mile to the west. 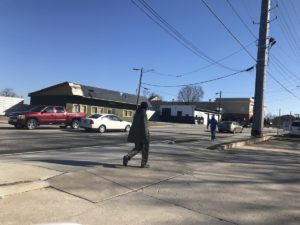 The Finley townhome development is to be built on a site now fronted by the green and white building that face the sidewalks and street known as U.S. 78 and Donald Lee Hollowell Parkway. Credit: David Pendered

Brock observes that he isn’t alone in pushing south and west of the Huff Road area. The seasoned intown developer Wood Partners has filed plans to develop residences and perhaps retail on a 19-acre site now home to an aggregates facility on Marietta Street. Wood Partners grew from the developers who were pioneers in what now is Midtown’s Miracle Mile.

Still, out in the Westside, there’s a lot of history to overcome.

Donald Lee Hollowell Parkway was named for a civil rights leader, a lawyer who helped integrate the University of Georgia. The purpose of the renaming was to fight the stigma of a prior name, Bankhead Highway. Bankhead Highway once was a proud moniker of a bustling blue collar community named in recognition of the Bankhead highway that connected Washington, D.C. with San Diego. As hard times befell the Bankhead corridor, even the renaming to honor Hollowell did little for renewal than lift local spirits.

Brock thinks the time to move that dial has arrived.

“We’ve developed … more than 1,400 houses in this area,” Brock said. “We’re taking advantages of land opportunities that will be transformative to the neighborhood, to the community. … There a lot going on strategically here. This is going to be a fabulous neighborhood.” 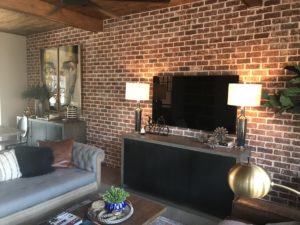 Amenities including brick interior walls and exposed beam ceilings are to be featured at The Finley, a townhome community along Donald Lee Hollowell Parkway that is a sister community of Westside Station, another Brock Built community. Credit: David Pendered 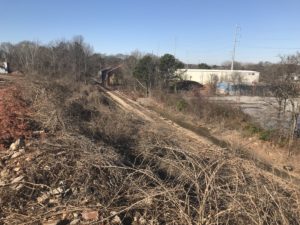 An out-of-use rail line behind The Finley townhome development, along Donald Lee Hollowell Parkway, has the potential to become an urban pathway. Credit: David Pendered 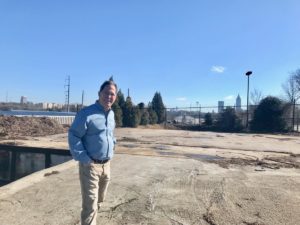 The skyline of Peachtree Street rises in the background as developer Steve Brock gives a tour of the site of The Finley, a future townhome development along Donald Lee Hollowell Parkway. Credit: David Pendered