A screenshot of an edited video of the June 2020 street attack in Buckhead shows the attacker at left and victims Jason Eades and Eliana Kovitch at right. The video has been circulated by Buckhead City Committee chairman and CEO Bill White.

A street attack and the quest to get it prosecuted as a Black-on-white hate crime has become a prominent part of the Buckhead cityhood movement, with the victims appearing everywhere from a ribbon-cutting to a state Senate committee hearing.

Bill White, the head of the Buckhead City Committee advocacy group, has aided victims Eliana Kovitch and Jason Eades, distributing edited videos of the attack and later worked with a New York FBI agent to press for a hate-crimes review. Kovitch says the attacker repeatedly called her a “white bitch,” but she claims a Fulton County prosecutor told them they are the “wrong color” for a hate crime case. Kovitch said she is a supporter of cityhood based on the BCC’s claim that it would increase the local police force.

“Yes, I support it completely, 100 percent,” Kovitch, a Buckhead resident and pediatric nurse practioner, said about cityhood in a recent phone interview. “I think having more of a police presence would have inhibited that [attack] from happening.” 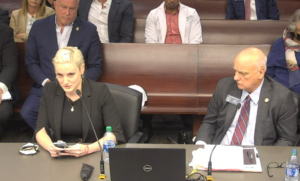 Buckhead crime victim Eliana Kovitch, at left front, testifies about her experience at a Nov. 4 state Senate committee hearing on cityhood. Seated behind her is Buckhead City Committee chairman and CEO Bill White, and at right is state Sen. Brandon Beach (R-Alpharetta), a supporter of cityhood.

But cityhood politics are “not my goal,” added Kovitch, saying she wants to spread the word that “Buckhead is not safe” and that she would support anyone increasing the police presence.

She and Eades, her boyfriend and a Midtown resident, are pressing for the hate-crimes prosecution simply because of the facts of the June 2020 attack, Kovitch said. This also ties into their larger claims that they were treated disrespectfully and mockingly by Fulton County prosecutors — including District Attorney Fani Willis — and believe the hate-crime angle was muddied by internal politics when the FBI briefly got involved. Kovitch says it’s about “just making sure that the law is actually followed and not cut corners because people are trying to solve cases quickly when they have a build-up of other cases” or a lack of available courts.

Jeff DiSantis, a spokesperson for the Fulton DA’s office, noted that prosecutors have hit the defendant in the case, Fakhraddivn Moore, with several charges that have him facing up to 27 years in prison if convicted. Those include two felony counts of aggravated assault, one felony count of terroristic threats, and two misdemeanor counts of battery.

Jessica Sully, the public defender representing Moore, could not immediately be reached for comment.

DiSantis said the DA’s office bases its charges on the evidence that emerges from its investigation, and that he couldn’t discuss that evidence in this case because it is still pending. While not responding directly to several allegations of ill-treatment made by Kovitch, DiSantis broadly defended the prosecutors who have handled the case.

“Ms. Kovitch’s characterization of her interactions with the office are inaccurate and disappointing,” said DiSantis. “Despite that, the staff assigned to the case will continue their efforts to see that justice is served.”

The attack and the arrest

The June 24, 2020 attack was disturbing by any measure. As described by the victims and partly shown on phone and surveillance video, the incident began when the couple dropped off a car at a Mercedes-Benz dealership on Piedmont Road and were preparing to leave in a rideshare. They say a man approached them, claiming his car was stolen and requesting money, then demanded beer from their car. As the situation escalated, the man threatened Eades — who was on crutches after leg surgery — with having his “head blown off,” removed his own shirt, then struck Eades and Kovitch, who was weeping. Kovitch said the man held a knife during part of the incident.

Videos show the man referring to the couple as “white folks” and Kovitch as a “white bitch.” The victims say he also called them “racist” and told them, “you’re in the real Atlanta now.”

They say he also repeatedly told Kovitch: “White bitch, get on your knees and beg for your life.”

After the altercation, the attacker fled on foot. Atlanta Police officers arrested Moore on the street nearby a short time later and accused him of various offenses based on the couple’s identification as they rode past in police cars. “Atlanta Police did an amazing job,” says Kovitch, though she thinks a stronger police presence would have prevented the crime in the first place.

It’s the treatment by Fulton prosecutors that is the center of the couple’s complaints, a factor that cityhood would not change as Buckhead City would still be in the county. Kovitch said prosecutors “victim-shamed” them as they were not badly injured. The prosecutor’s office may have also violated the victims’-rights “Marsy’s Law” by not notifying them of discussions about altering the charges against Moore. Kovitch said she was insulted by Willis commanding her to obey prosecutors’ instructions about such matters as wearing a dress in court, even if the orders seemed “retarded,” which Kovitch claims the DA said in a voice mocking a person with a mental disability.

But the lack of a hate-crimes charge is the main tension. Police did not charge Moore with any hate crime during his arrest. Kovitch says the couple assumed that prosecutors would seek the charge later. Besides the attacker’s words, Kovitch notes that the crime took place less than a month after looting and vandalism in Buckhead that happened at the same time as protests over the murder of George Floyd by police officer Derek Chauvin. In a later email to the FBI, Kovitch also claimed the location of the crime proved a biased intent: “Why else was he hanging around the Mercedes dealership? He was there because of the stereotype of white people having Mercedes. He believed he would encounter white people there to attack.”

Kovitch claims that when she asked Assistant District Attorney Rachael Groffsky about a hate-crimes charge, “she laughed and she said, ‘It doesn’t work that way’… She said, yeah, we’re not the right color.”

At that point, Kovitch said, she began contacting media outlets and elected officials for help. She also reached out to White, chairman and CEO of the BCC, after seeing his advocacy for public safety. She says he proved to be helpful and supportive.

White has taken various steps to publicize the couple’s situation, sometimes without their advance knowledge — Kovitch says an announcement of their appearance at a BCC headquarters ribbon-cutting was “news to me” — but always with their support. White helped to highlight a Fox5 news report about the case on a cityhood-touting appearance on the Fox News program “Tucker Carlson Tonight.”

Kovitch appeared at a Nov. 4 state Senate committee hearing about the cityhood legislation to tell her story. At the conclusion of her testimony, state Sen. Randy Robertson (R-Cataula) said the case should get a hate-crime penalty enhancement under Georgia law.

White also worked on the case behind the scenes by contacting the FBI. White did not respond to questions about his involvement and the significance of the case to the cityhood movement. But he previously gave SaportaReport an Oct. 1 email thread where he solicited help from a New York FBI agent named John Venturelli. In response, Venturelli wrote that he had contacted the FBI’s Atlanta field office, where an agent “agreed to review the matter with the appropriate personnel in his office” and that they would keep White advised.

The FBI’s Atlanta office has said it does not confirm or deny the existence of investigations and did not respond to questions about the New York agent’s involvement. Asked about the involvement of an out-of-state agent and the offer to keep a private citizen advised about a case, the national FBI press office said only, “In general, it’s the FBI’s standard operating procedure not to comment on ongoing investigations.”

Kovitch said she was contacted earlier this year by an FBI hate-crimes investigator and had several conversations with him. “He had kind of alluded to this being an obvious hate crime and he said he would have to present it to his attorneys, the U.S. attorneys, and that he would have a final answer,” she said.

At roughly the same time, she had a meeting with Willis, the Fulton DA. Kovitch said Willis told her there’s “a lot of bad blood between the FBI and district attorneys for different counties” and that the FBI would never take up the case. But, Kovitch claims, Willis added that if the FBI filed charges, she would drop the county case, freeing Moore.

A couple of days later, Kovitch says, the FBI agent contacted her to say that federal prosecutors would not proceed with a hate-crime case. Since White’s email about a further review, Kovitch said, she has not heard anything more from the FBI.

Kovitch says she is especially unhappy because Willis is seeking a hate-crime penalty enhancement against Robert Aaron Long, the defendant in this year’s infamous spa shootings in Atlanta and Acworth, where some but not all of the victims between the two locations were Asian women. Kovitch noted the case drew controversy as Long blamed sex addiction for his crime while a large number of advocacy groups said he plainly targeted Asian women; prosecutors with the federal government and Cherokee County decided not to pursue hate-crime penalties. “So that can be a hate crime, but ‘white bitch, get on your knees and beg for your life’ — that’s not a hate crime,” said Kovitch of Willis’s decisions.

“I feel like they don’t want to bother with this,” Kovitch said of the Fulton DA’s office. “They have a ton of other cases backlogged… I do feel there was some sort of weird political thing going on with the FBI and Fani Willis.”

Update: This story has been updated with context about the spa shootings hate-crime controversy.