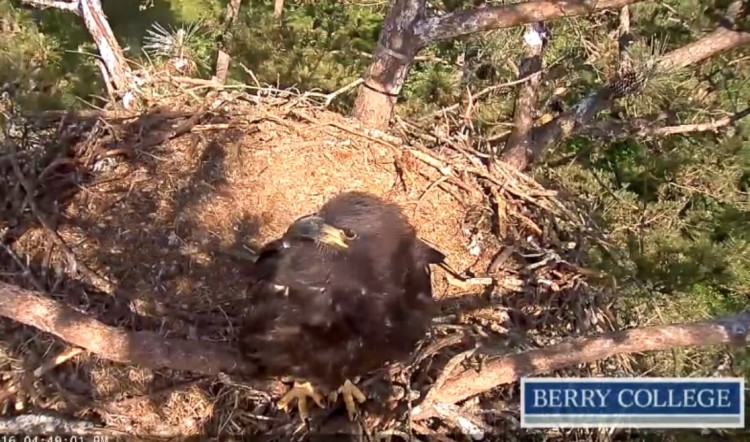 The Berry College eagle cam filmed an eagle sitting in the nest this morning and keeping an eye to the sky. Credit: berry.edu/eaglecam

Georgia’s bald eagles are continuing their recovery from zero known nests in 1970 to more than 200 today, according to the Georgia Department of Natural Resources. 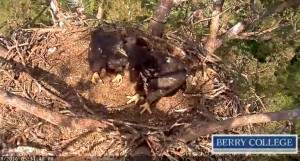 The Berry College eagle cam photographed these birds rearranging their nest on Friday morning. The birds have hatched two eaglets this year and two in 2015, according to Berry. Credit: berry.edu/eaglecam

These results are a testimony to the effects of environmental protection measures the nation has taken to protect eagles and other critters, according to DNR.

A major step was the U.S. ban on DDT in 1972; eagles are at the top of the food chain and, by the time they eat a prey, the toxin has cycled through several animals and has reached high levels. Other factors include habitat protection resulting from federal acts regarding clean water, clean air, and endangered species.

The number of offspring could be higher. Sixteen eagles were spotted incubating eggs during the second round of flights, from March 15 through April 8. Half of these nests were in southwest Georgia.

These numbers don’t reflect the state’s overall population of the migratory birds, according to Bob Sargent, a DNR nongame conservation section program manager.

That’s because a count of eagle nesting pairs and their young do not represent an actual count of all bald eagles in the state, Sargent said in a statement. Eagles take at lease five years to reach adulthood, and many birds won’t next for an additional one to three years. 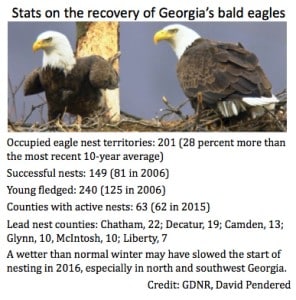 “There are likely at least twice that many more eagles in the state, especially in the late-fall and early winter months when northern birds migrate south,” Sargent said.

The state ran aerial surveys to count birds from January through April. This program is part of DNR’s mission to conserve nongame wildlife, native animals that aren’t legally hunted or fished, and native plants and natural habitats.

State environmental officials expressed concern that the number of nests dipped compared to 2015. The 2015 count revealed 210 nests – which marked the first time the number of nests topped 200 since surveys began decades ago. Sargent noted that the drop of nine nests over the past year is negligible.

“We have data since 1978, and there were several years where the upward trend briefly leveled out or dropped slightly,” he said.

Nests were counted in 63 of Georgia’s 159 counties, according to the statement. The distribution of nests stretches from Walker County, in northwest Georgia, to Camden County, which abuts the Atlantic Ocean and borders Florida.

The nests far from the coast or major rivers is a bit unusual. 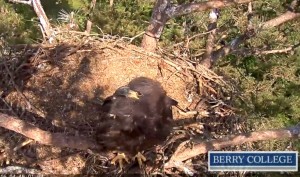 The Berry College eagle cam filmed an eagle sitting in the nest this morning and keeping an eye to the sky. Credit: berry.edu/eaglecam

“Parts of the state have nests where you wouldn’t expect them,” Sargent said in the statement, referring to sites far from the coast, reservoirs or rivers where the fish-eating raptors tend to concentrate.

In terms of ongoing challenges, Sargent said that officials had expected to find more nests along the Savannah River and its reservoirs. As recently as 1998, there were eight nesting territories recorded at Clarks Hill Lake, aka J. Strom Thurmond Reservoir. DNR’s statement did not provide the number of nests found there this year.

The likely cause of the depletion is a neurological disease named AVM, for avian vacuolar myelinopathy, according to the statement.

According to a report by the National Wildlife Health Center, more than 80 bald eagles have died from AVM since it was first detected in Arkansas in 1994. The most likely cause is a man-made or natural toxin. Infected birds appear otherwise healthy, but AVM causes poor muscle coordination. Consequently, infected birds have difficulty flying.

The statement did not identify the number of bald eagles that died from injuries sustained when they were struck by a vehicle while the birds ate roadkill. The statement also noted that bald eagles have been shot, despite protections under state and federal law.