“Becoming,” the energetic and endearing new Netflix documentary based on Michelle Obama’s best-selling memoir, made me realize how much I missed having a First Lady.

This isn’t meant as a slap at Melania Trump.  It’s just that, no matter who you preferred – Jackie or Mamie, Eleanor or Hilary, Ladybird or Laura – most First Ladies have had a certain presence.  However, in this admittedly uncritical glimpse inside her life, Michelle has more than a presence; she’s got an extraordinary charisma that somehow combines something regal with something that’s redolent of a just-us-girls sleepover. 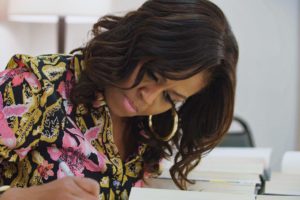 The film mostly follows her on her book tour to 34 cities where she’s interviewed by the likes of Gayle King, Conan O’Brien, Stephen Colbert and that other Chicago-based-girl-made-good, Oprah.

Her daughters, her brother, her mother and, of course, a certain former President all make appearances, but the focus is on Obama who admits, among other things, that when she finally left the White House, she sobbed on the plane for a half hour – “a release after eight years of trying to do everything perfectly.”

Gee, as it turns out, Obama is as human as the rest of us. Her tour, she says, isn’t just a chance to push books; it’s also meant to give her time to process “What the hell just happened to me?”

The movie works efficiently as biography. We see where she grew up in a working-class Chicago neighborhood.  We learn her father was stricken with MS. We hear about the high-school guidance counselor who thought Princeton was out of Obama’s league (she applied anyway and was accepted – and adds, with a grin, she doesn’t think said guidance counselor is still at that school).

Though there are brief segues into some of the racist attitudes that surrounded the First Couple – remember The New Yorker cover where they are decked out like self-satisfied terrorists?  –  the picture overall emphasizes hope, not hate. 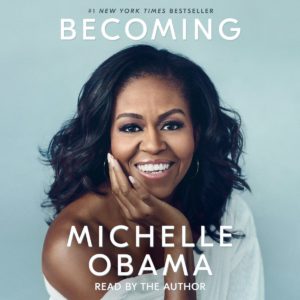 So, if you’re looking for something warts-and-all, perhaps you should seek out the old Bill O’Reilly tape – briefly seen here – in which he wonders “Does Michelle Obama dislike America?”

And O’Reilly is hardly the only bump in the road.  Obama would make some impassioned speech about an issue that meant a lot to her, she recalls, and all anyone wrote about was her interesting designer dress.

The only question I had was, couldn’t they have shown her in small groups with more young men? Yes, it’s inspiring to see how, well, inspiring she’s been to countless young women, but girls aren’t going to get anywhere without guys alongside them (and vice versa).

That said, “Becoming” is an excellent antidote to our pandemic-induced nation-wide depression. It’s like visiting with a very accomplished old friend who also remembers better times and insists, without making a big deal of it, that happy days will be here again.