A segment of the Atlanta BeltLine’s Westside Trail through Washington Park and Bankhead has a preferred route and could have a construction-ready design by January. 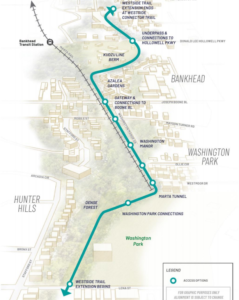 The preferred alignment, or route, for the Atlanta BeltLine’s Westside Trail Segment 4, as unveiled at a July 26 meeting.

Actual construction on the so-called Westside Trail Segment 4, aka the Westside Trail Extension North, is yet to be scheduled and would take well over a year, officials said at a July 26 virtual meeting unveiling the route. Also still to be planned is the light-rail transit part of the BeltLine on the route, which could affect the trail’s alignment or require changes to it.

A major local change in the plan is that it would turn two sections of public street into a BeltLine trail.

Segment 4 would run about 1.3 miles between Lena Street in Washington Park’s namesake park and an area on Law Street just north of Donald Lee Hollowell Parkway. On that northern end, it would join the existing Westside BeltLine Connector and the under-construction Westside BeltLine Trail Segment 3. The trail would be 14 feet wide.

Atlanta BeltLine Inc., the organization planning and building the trail, transit and park system, began developing Segment 4 route concepts in public meetings last fall. The big difference in the preferred route, or alignment, is that it sticks to the east of MARTA’s Green Line tracks, discarding alternatives that would have placed part of it to the west, closer to Hunter Hills. ABI officials said those alternatives would have taken far more trees and required a pedestrian bridge over the MARTA tracks, among other impacts. 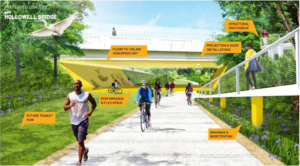 For someone traveling south to north, Segment 4’s preferred route runs as follows: along the edge of Washington Park; veering eastward to cross the tunnel where the MARTA line emerges to the surface; following those tracks and crossing Mayson Turner Road and Joseph E. Boone Boulevard at surface level; veering eastward again on an old railroad corridor ABI calls the “Kudzu Line”; and following that northward through a Hollowell Parkway underpass to the Law Street area. 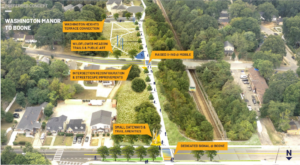 A conceptual illustration of the trail and park that would be created by turning two streets into the trail. Credit: Atlanta BeltLine Inc.

The concept includes several street access points, including twin ramps to Hollowell Parkway. Some of those ideas will be worked out in the final design. The Hollowell Parkway underpass is shown in illustrations as having public art, possibly including “projection & audio installations.”

One public comment asked about ABI’s promise to preserve or create 5,600 units of affordable housing along the entire BeltLine corridor. Amid controversy about the pace of that effort, ABI says it is playing catch-up and is currently at about 43% of that goal, which it expects to meet by 2030. ABI recently held a public meeting about a 31-acre Bankhead site it bought at 425 Chappell Road, near the Segment 4 trail, specifically to create more affordable housing.

The current long-term plan is for the trail portion of the BeltLine’s 22-mile loop around the city to be completed by 2030 and the transit portion by around 2050. For more information, see beltline.org. For the full presentation from the July 26 meeting, click here.

A map showing the proposed Westside Trail Segment 4 in the context of other BeltLine trails. Credit: Atlanta BeltLine Inc.

A detailed map of the proposed Westside Trail Segment 4 alignment. This map is oriented with north to the right and the west at the top. Credit: Atlanta BeltLine Inc.

A conceptual illustration of the Lena Street access point to the trail inside Washington Park. Credit: Atlanta BeltLine Inc.

A conceptual illustration of the “Kudzu Line” section of the trail. Credit: Atlanta BeltLine Inc.