A conceptual illustration of Culdesac's vision for the Murphy Crossing redevelopment. (Image from Atlanta BeltLine Inc.)

A new developer has been chosen to remake Murphy Crossing, a 20-acre site on the Atlanta BeltLine’s Westside Trail, into an enormous mixed-use center. 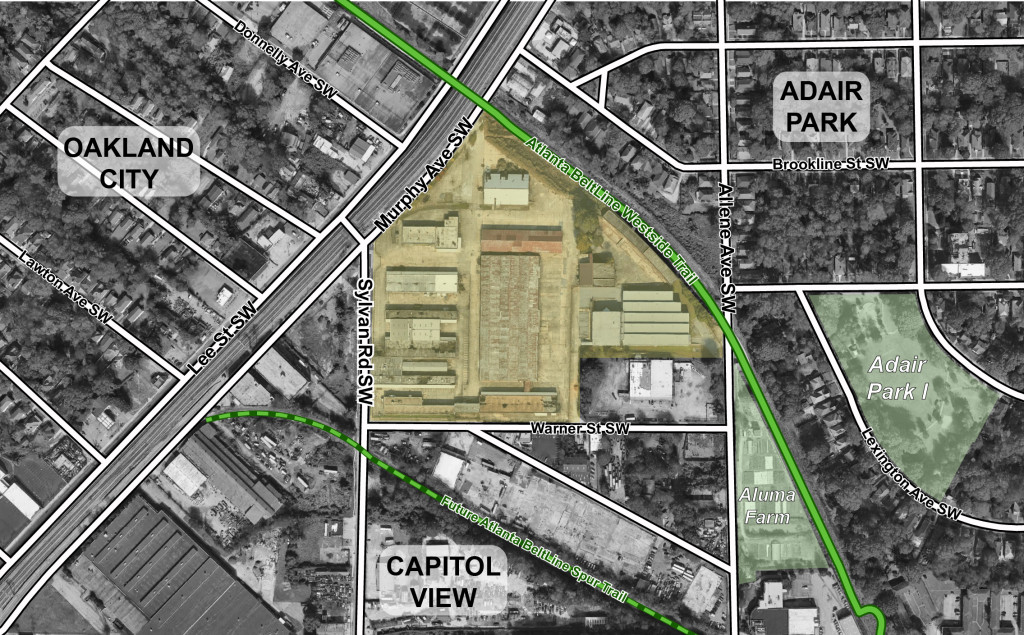 Arizona-based Culdesac, Inc. is the finalist selected by Atlanta BeltLine Inc. (ABI) and would lead a team that includes Atlanta firms. The preliminary concept — likely to change with public input — includes roughly 800 housing units, 180,000 square feet of retail space, and 150,000 square feet of office and light industrial space. A public meeting with the team is scheduled for Sept. 26.

According to an ABI press release, some of those commercial components will include “a grocery store, retail and dining options, co-working spaces, arts and culture programming, and a farmers’ market.”

“The revitalization of Murphy Crossing has long been a part of the vision of Atlanta BeltLine and represents many of the aspirations we have for sustainable, equitable redevelopment along our 22-mile corridor,” said ABI President and CEO Clyde Higgs in the press release. “We believe the Culdesac team, which includes members of one of the very neighborhoods this project will impact, will be great stewards of the community’s desires and great partners to our Atlanta BeltLine team.”

ABI says the Culdesac concept “has prioritized high density, transit-oriented development focused on preserving land for pedestrians and bicyclists in outdoor spaces protected from cars. The open layout will also include residential and commercial affordability in a mix of new and existing buildings to create connectivity with the surrounding neighborhood.”

“Culdesac, Inc. designs welcoming and locally connected neighborhoods that offer a walkable lifestyle,” said Jeff Berens, the company’s founder and chief operating officer, in the press release. “We build mixed-use developments that embrace community, open space, and mobility, and we’re excited to have the opportunity to bring our next neighborhood to Murphy Crossing. We look forward to working with our partners in the development of a project that reflects the BeltLine’s commitment to tie the people of Atlanta together and create a more livable and geographically integrated city.” 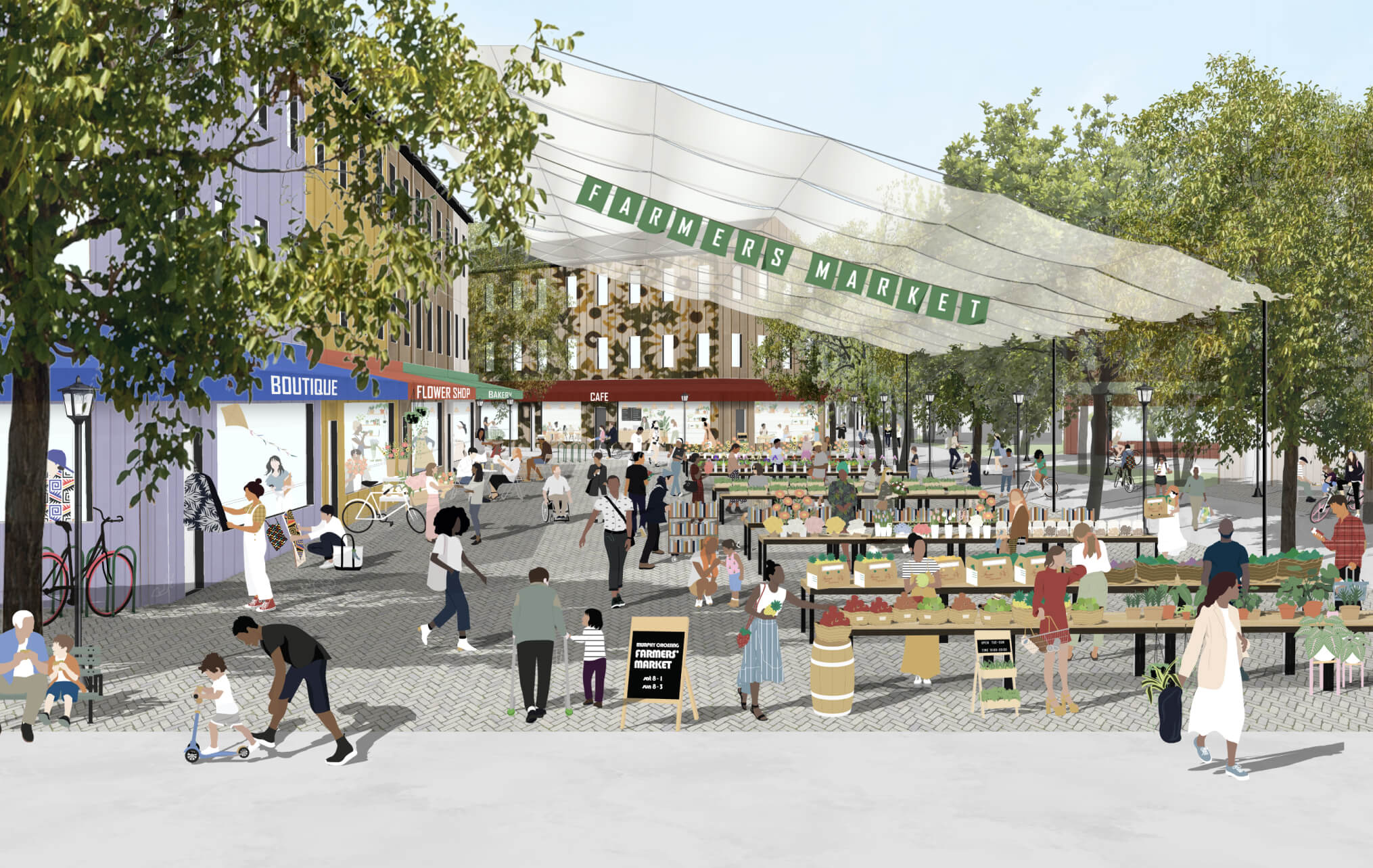 A farmer’s market in the Murphy Crossing concept. (Image by ABI.)

This is ABI’s second shot at redeveloping the property at 1050 Murphy Ave. in Oakland City, between Sylvan Road and the BeltLine, which was once home to the Georgia State Farmers Market. A previous deal with Place Properties fell apart in 2020 amid the COVID-19 pandemic and questions about the development team’s abilities from the community and Invest Atlanta, the City’s development authority. ABI is currently referring to Culdesac, the winner of a new request for proposals (RFP) process that launched last year, as the “finalist” for selection with no details of a development agreement revealed.

Urban Oasis is known for a permanently affordable housing development on the Westside amid concerns about gentrification from such factors as a new Microsoft complex and the BeltLine itself. T. Dallas Smith was a major broker for the Microsoft plan, among other projects.

ABI has a mandate to create and preserve affordable housing along the BeltLine to mitigate the downsides of redevelopment along the trail and eventual transit loop. According to the press release, the Murphy Crossing plan includes making 30 percent of the housing units affordable, with 25 percent of those permanently discounted and 5 percent locked in for at least 30 years. ABI says its target definition of “affordable” at Murphy Crossing is for households making 60 to 80 percent of the area median income — essentially meaning middle-income. 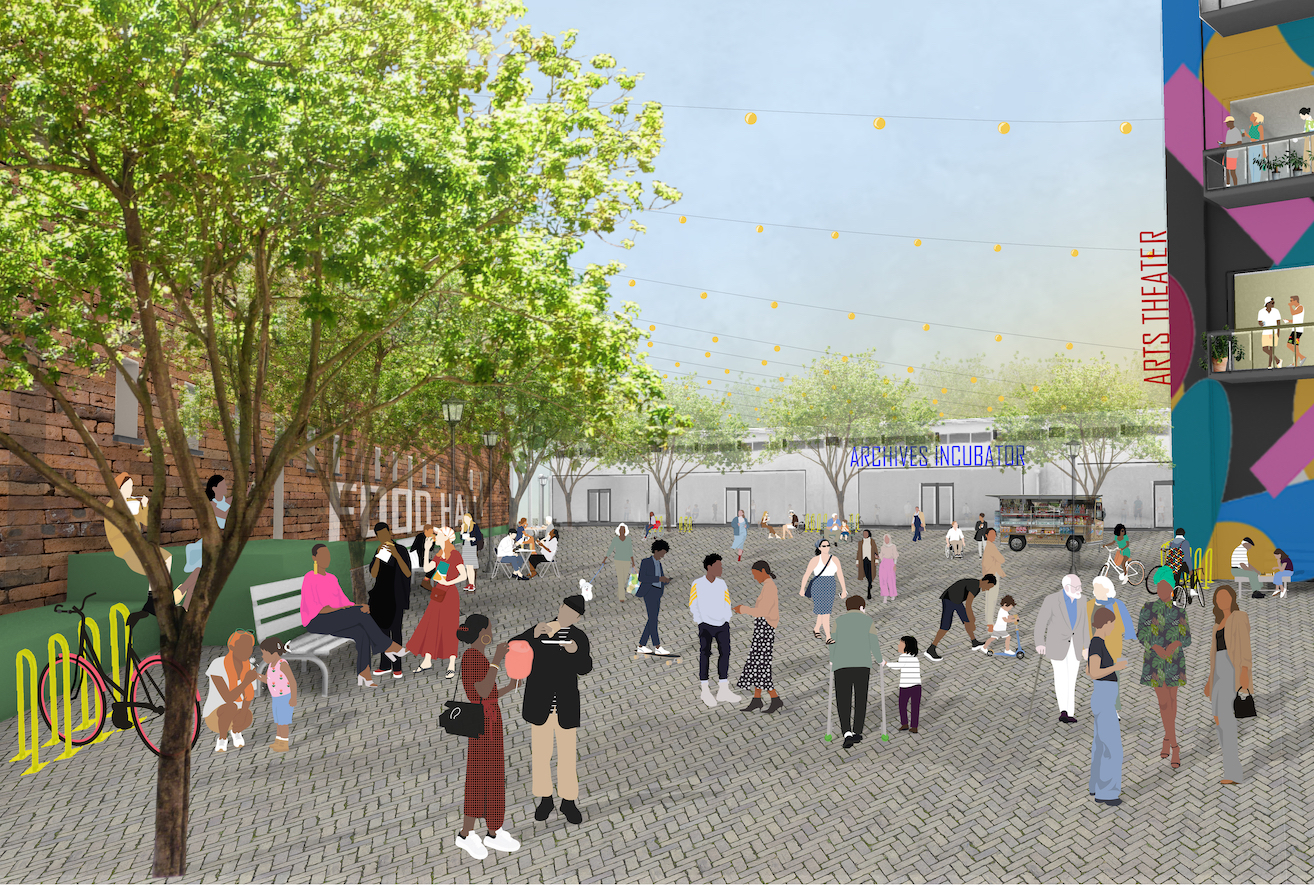 An “art plaza” in the Murphy Crossing concept. (Image by ABI.)

Culdesac also intends to make 30 percent of the retail and light industrial space affordable to local small businesses, according to the press release, but no definition of “affordable” was given.

ABI said among its goals in the RFP — which was shaped by community input — was a team that included “neighborhood-based minority entrepreneurs and businesses.” Urban Oasis was highlighted in the press release as helping to meet those goals.

“Murphy Crossing is important to my community as a model of economic inclusion, jobs, affordable housing, commercial spaces and walkable retail that has been absent for decades,” said Joel Dixon, principal at Urban Oasis Development, in the press release.

“Furthermore, this is a watershed moment to have a current Black resident as a joint venture developer for a publicly-owned redevelopment site. The fact that I’m also a legacy resident, who was raised minutes from this site, is a first in the history of a public Atlanta RFP and speaks to the sincerity of ABI to listen to the neighborhood’s voice. It’s a legacy our team intends to honor and hope will extend as the new normal going forward.”

Neighborhood leaders were reportedly notified of the developer selection privately on Sept. 21. Zachary Adriaenssens, chair of Neighborhood Planning Unit X, told SaportaReport the selection is “a wonderful first start” and that “I’m thrilled with the local partner that’s been brought in.”

“Major concerns are affordability and pushing for the inclusion of a MARTA in-fill station on-site, but I can’t lie — the folks on the development side are people who 100 percent know the importance of pedestrian access and sustainability,” added Adriaenssens.

J. Lawrence Miller, president of the neighborhood organization Adair Park Today, told SaportaReport his community is “ecstatic” over the choice of Culdesac and Urban Oasis, noting the latter company “is well respected in the field of quality affordable housing and community engagement.”

“The Murphy Crossing initiative will be transformative to Southwest Atlanta and we look forward to continuing to participate in the project,” he said.

Miller led the Murphy Cross Coalition, a community effort that included a survey that ABI used to shape the RFP. Miller noted that some of the themes in the more than 1,000 responses included “significant housing density, long term, multi-year affordability, affordable commercial, reduced parking, a robust transit plan that includes direct connections to the Westside Trail and MARTA heavy rail, as well as bus, retail, [and] significant green space.”

ABI’s virtual community meeting is scheduled for Monday, Sept. 26 at 6:30 p.m. and can be attended on Facebook or Zoom. Culdesac is set to launch a webpage about the project soon.

Update: This story has been updated with comment from Adair Park Today and NPU-X.