A scene from the movie "Benediction"

I was so looking forward to “Benediction,” a film about the British World War I poet Siegfried Sassoon.

Then I saw it was written and directed by Terence Davies.

Davies is what I’d call an acquired taste.  He is immensely popular with many movie critics because of, I guess, what you could call his purity of vision.  His style is very distinctive, very slow (to his fans, mesmerizing) and he has been openly – one might say, courageously – gay for decades, i.e., when it wasn’t at all easy to be gay.

His films include “The Long Day Closes,” “Distant Voices, Still Lives,” and “A Quiet Passion.” If you’ve seen any of these and, more importantly, enjoyed them, never mind this review. “Benediction” is, more or less, more of the same.

Okay, having stated all my prejudices, let me try to say something, well, useful about “Benediction.” 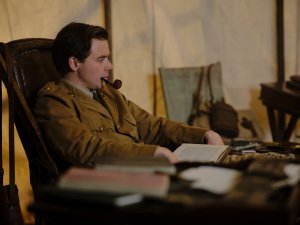 A scene from the movie “Benediction

The movie begins with the outbreak of World War I.

Sassoon (Jack Lowden) serves bravely, even heroically, but that doesn’t blind him to the inherent horror of war. Throwing away one of his medals, he writes a very public letter of protest which could earn him a court martial and even a firing squad. Instead, thanks to the intervention of an old friend (Simon Russell Beale), he’s sent to a military psychiatric hospital in Scotland.

There, he finds a sympathetic shrink (Ben Daniels) and a fellow patient/poet named Wilfred Owen (Matthew Tennyson). Owen, of course, is the other superb chronicler of the grim ghastliness of the Great War. Davies suggests an attraction between the two, but Owen is returned to active duty and dies one week before the war ends.

The bulk of “Benediction” chronicles Sassoon’s post-war life, which, apparently, mostly consists of affairs with elegantly bitchy young men saying elegantly bitchy things about each other and about the various female gargoyles (Edith Sitwell, anyone?) who surround them.

Sassoon is invited to spend the night at the estate of one lustful patroness, who, entering his bedroom, suggests she might be more interesting than a cup of cocoa. Sassoon replies, “I’m afraid I prefer cocoa.”

True, there is a certain fascination in being introduced to demi-monde of well-dressed and apparently well-off men forced to live in a shadow world simply because they’re gay. Sassoon’s lovers include the actor Ivor Novello (Jeremy Irvine), socialite Stephen Tennant (Calam Lynch) and actor/director Glen Byam Shaw (Tom Blyth). Some are nicer than others, but they all look quite handsome in tuxedos. 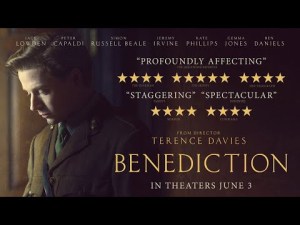 The film’s final part deals with Sassoon’s unhappy old age. Played with scowling bitterness by Peter Capaldi (my favorite Dr. Who), he’s been forced into a loveless marriage and even managed to father a son whom he apparently dislikes (of course he would; said son wouldn’t look handsome in a tux).

Davies does some interesting things with WWI documentary footage, and he gets strong performances from his cast.  But it’s difficult to get inside his Sassoon, to feel his anti-war passion or his pain as a gay man in an unforgiving culture. Especially odd is one of the picture’s most affecting scenes. Near the end, we see a casualty of WWI, a legless man, left outside alone in a wheelchair as night falls. And we hear a magnificent poem – which, it turns out, was written, not by Sassoon, but by Owen.

“Benediction” can be viewed on Amazon Prime.