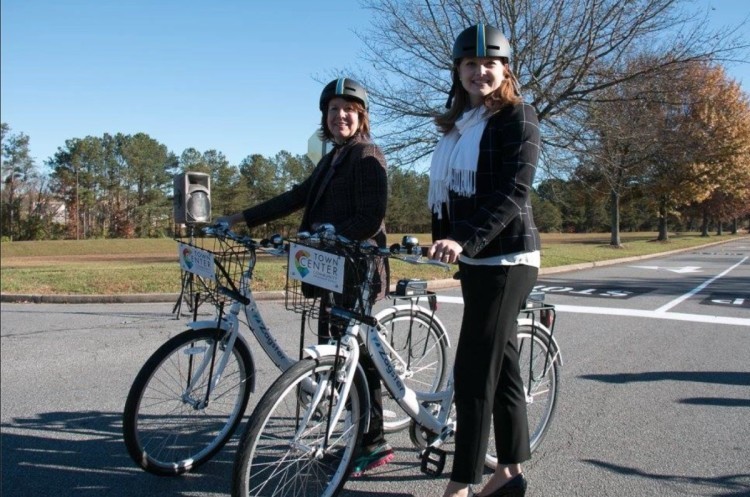 A bike share program is off to a strong start in the Kennesaw area, according to its sponsor, the Town Center Community Improvement District.

Almost 800 persons have enrolled in the program since service began on Nov. 20, 2015. Riders have taken more than 1,500 trips. That represents more than 160 trips a week, according to the January newsletter of the Town Center CID.

“Interestingly, almost 50 percent of riders are repeat, indicating that those adventuresome types that give it a try enjoy it enough to come back,” states the newsletter released Jan. 21 by Tracy Rathbone, executive director of the Town Center CID.

Town Center’s bike share program is said by the vendor to be the first one in Georgia to be opened by a CID. CIDs are places with defined borders where owners of commercial property agree to pay a higher property tax rate. This extra tax increment is used to pay for community improvements, such as streetscapes in Buckhead and security forces in Midtown and Downtown Atlanta.

Atlanta had planned to have a bike share program functioning by the close of 2015. The Atlanta City Council voted in February 2014 to authorize a contract with a vendor proposed by Mayor Kasim Reed’s administration. Delays have resulted in a new target opening date of sometime this summer. That’s according to an interview with Atlanta Planning Commissioner Tim Keane, as reported Dec. 7, 2015 in atlantamagazine.com. 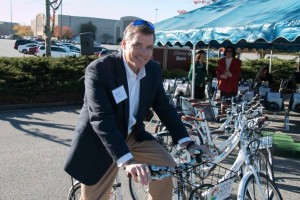 The pricing program in the Town Center area provides that trips under one hour are free.

Each hour after the first one is billed at a rate of $3 an hour. The maximum fee is $24, according to a description of the program posted by the operating partner, Massachusetts-based Zagster.

The bike share program is open to everyone older than 18 years who can provide a valid credit or debit card.

The bike can go anywhere, provided that it is returned to a Zagster station and locked into place. The website doesn’t say anything about the number of hours that a bike can be checked out. But it clearly contemplates that riders will return bikes within 24 hours. The website states:

Helmets are not required but are highly recommended. Cyclists who don’t have a helmet can purchase one from bernunlimited.com at a price discounted with a voucher code Zagster provides.