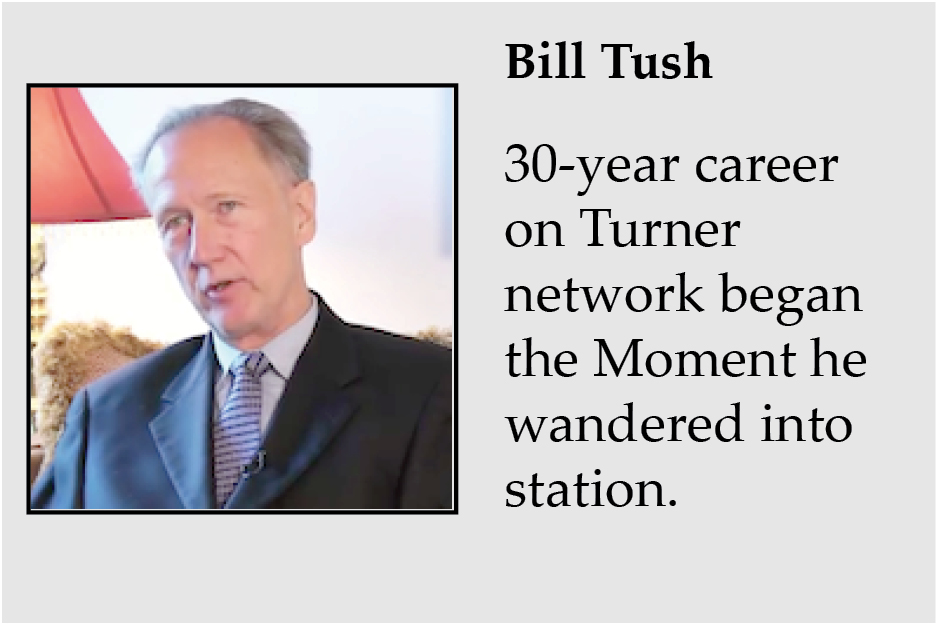 For 30 years, Bill Tush was a comic fixture on Ted Turner’s SuperStation Channel 17, but it wouldn’t have happened had it not been for his Moment in 1974 when he walked into what was then a struggling alternative TV station and asked for a job.

“One weekend I was watching this local television station that ran all these great movies but they were in such bad shape – they were scratchy I remember – but they were all the old great black-and-white films that I’ve always loved,” Bill said. “I was hooked on this television station. But the station was so bad I thought I could get a job there.”

Luckily for Bill, he happened to walk into the station the day after the station’s previous voice over announcer had quit. That Moment launched a career on what would later become the nation’s first cable SuperStation when Ted Turner had the novel idea in 1976 to bounce the signal of what was then a UHF-frequency station off new satellite technology into homes across America. In those days, most cities, if they were large enough, had three network stations and perhaps an educational station and an independent station. So when the SuperStation appeared a much smaller menu of cable selections, WTBS became a hit in households across the country.

Before joining Channel 17, Bill was working on WGST-AM radio as a disc jockey, having just moved to Atlanta from Pennsylvania. Hired for a one-hour-a-day job for $50 a week, Bill kept hanging around the TV station until he found more and more work.

“A couple of weeks later down the hall I heard this voice (you’ll have to hear his impression of Ted on our accompanying video) and I‘m like, ‘Who the heck is that’ and I asked the person I was talking to, ‘Who’s that?’ And she said, ‘Oh, that’s Ted Turner, he owns the station.’ ”

The Federal Communications Commission required the station to broadcast news, so Ted suggested Bill start a newscast at 3 a.m. that soon became a legend. One night, Bill put a shirt and tie on Rex, a german shepherd that belonged to an associate, and had Rex join him on air. Though Rex appeared only one night, the myth grew to the point many people thought the dog was a nightly guest. You can see a videotape of the Rex newscast and many of Bill’s other comic highlights when CNN did a 25-year tribute by clicking here.

Bill also hosted and introduced those great old movies that he loved on Channel 17, which helped fill the station’s 24 hours of air time – then an anomaly among stations that signed off in the wee hours of the morning. The SuperStation was a favorite among transplanted Atlantans living in other towns – including me – who were happy to get a taste of Atlanta by watching Bill, TV sitcom reruns and not one, but two daily broadcasts of the Atlanta Braves, which Ted also bought in 1976 for programming purposes.

Bill eventually landed his own talk show, called Tush, in 1980 and the cast included actors and writers who went on to produce and star in other famous sitcoms. When Ted started CNN, Bill moved to Hollywood a new entertainment show called People Now on the unprecedented 24-hour news channel. He became senior entertainment correspondent for CNN in 1993 and later moved to New York City to host Showbiz Today. He retired from Turner Broadcasting in 2003 and lives in Atlanta.

Looking back over a lifetime of interviewing generations of Hollywood stars as their careers arched up and down, Bill owes it all to that one Moment that he decided to walk into that startup TV station and asked for a job.

“It changed my life,” he said. “Had I not walked in that very day it wouldn’t have happened.”

Next week in Moments: John Dewberry, former Georgia Tech quarterback and current developer, who learned an important lesson in childhood.