Fizzy, funky and as full-of-itself as a slumber party on acid, “Birds of Prey” is a feminist free-for-all disguised as a superhero movie.

You may remember crazy, perky Harley Quinn (Margot Robbie), the best thing in 2016’s “The Suicide Club.” Mostly ID’d as The Joker’s insane – and deadly – girlfriend, she was the sole bright spot in an otherwise turgid franchise misfire. 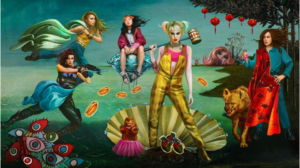 Now she’s back headlining her own movie and, as Dan Aykroyd once said of Jessica Tandy in “Driving Miss Daisy,” she’s a pistol.

Decked out like a member of a roller-derby-themed girl gang from the cult classic, “The Warriors” (one of many films “Birds” references), Harley begins the picture by breaking up with The Joker – or “Mr. J” as she calls him in her Betty-Boopish Brooklyn honk. But in losing him, she also loses his considerable protection. Now everyone in Gotham with a grudge against her is getting in line for a little payback.

Deadliest of the group is Roman Sionis (Ewan McGregor, enjoying himself tremendously) who’s also on the trail of a lost diamond (don’t worry about it; it’s the McGuffin). One of his henchmen (Chris Messina) had it, but a teenaged petty thief named Cassandra (Ella Jay Basco) picked the wrong pocket and, well, the hunt is on. 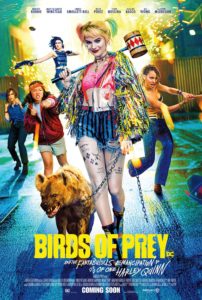 Somehow, Harley ends up guarding the girl. Luckily, she has help – the “birds” of the title. They are: Black Canary (Jurnee Smollett-Bell), a singer with a killer voice; Montoya (Rosie Perez), a true-blue detective seemingly stuck in an ‘80s cop show; and Huntress (Mary Elizabeth Winstead), a socially awkward vigilante.

They make a great girl gang – Winstead is especially amusing – but Robbie is the spark. You literally can’t take your eyes off her, whether she’s dealing with Breakup Blues by mainlining Cheez Whiz straight into her mouth or explaining to her new teen ward that if she wants boys to respect her, “You have to show them you’re serious. Shoot someone. Blow something up.”

“Bird of Prey” shoots lots of people (sometimes with glitter bombs, sometimes with something far more painful) and it blows up as much stuff as any boy-centric comic-book movie.

But most of all, it blows up our notions of what makes a female superhero picture.  It’s antic and sure-of-itself and fabulously frenetic. “I want to be like you,” Cassandra says admiringly to Harley. “Except the crazy part.”

Me, too. I’ll even take the crazy part.

Available on Amazon Prime and other media outlets.