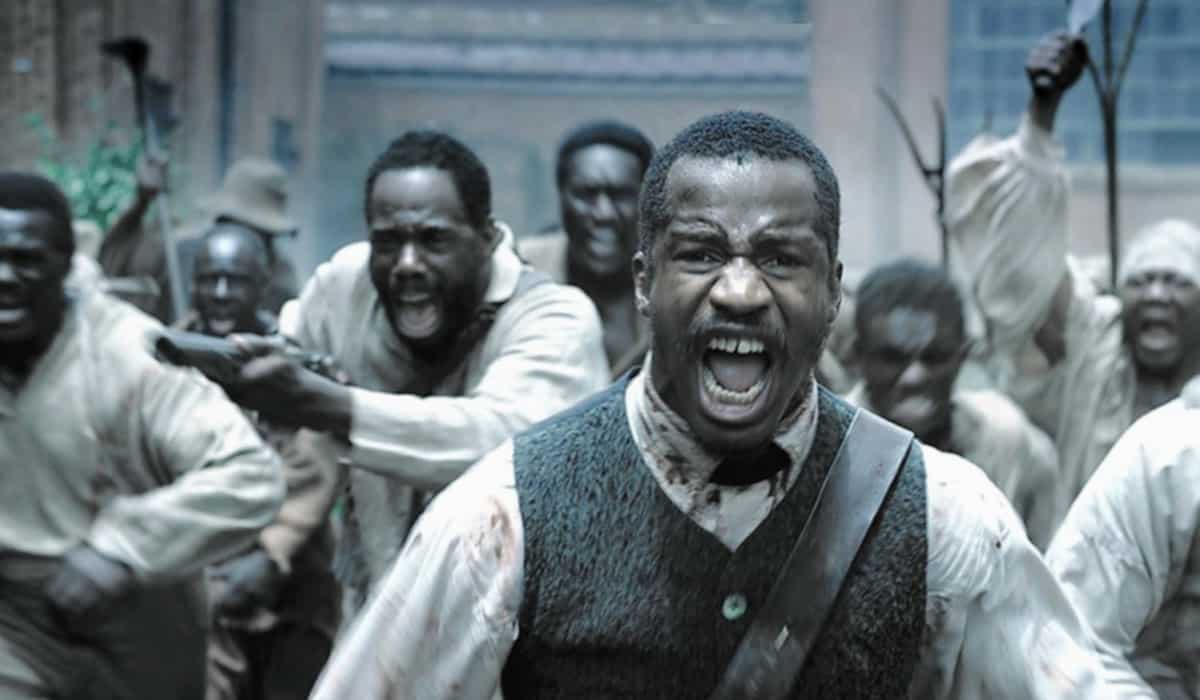 In Nate Parker's version of 'Birth of a Nation,' slave Nat Turner's allegiance shifts from a loving God, to a wrathful one, to leading an uprising that had tremendous consequences. Credit: globalblackhistory.com
Share5
Tweet
Share
Pin
Pocket
WhatsApp
Buffer
Email
Reddit
5 Shares

Arriving amid a swirl of controversy, rumors and standing ovations at the Sundance Film Festival, “The Birth of a Nation” is a powerhouse of a picture.

Writer/director/star Nate Parker has taken a little-known moment in American history and slammed it home with extraordinary force. In 1831, a Virginia slave named Nat Turner led a bloody revolt against the white plantation owners and their families (Yes, he murdered women and children). The rebellion was brief – only 48 hours – but around 60 people were killed. The uprising was subsequently used to justify harsher laws against African-Americans. 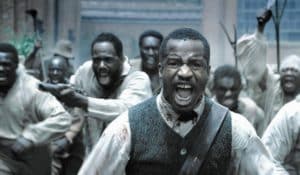 In Nate Parker’s version of ‘Birth of a Nation,’ slave Nat Turner’s allegiance shifts from a loving God to a wrathful one, culminating in his leadership of an uprising that had tremendous consequences. Credit: globalblackhistory.com

The movie begins with Turner as a child – an extraordinary child who’s marked for greatness, according to a soothsayer. The prophecy seems true; noting that Nat can read, his white mistress (Penelope Ann Miller) brings the little boy into the “Big House” and encourages him. Well, selectively encourages him. She lets him study the Bible until he knows it chapter and verse. However, the other books in the library are, she gently says, “full of things your kind wouldn’t understand.”

Alas, her husband decides Nat is more use to the family picking cotton. Which he does until one of his master’s friends notes how well-behaved Turner’s slaves are. The now-adult Turner (Parker, who looks a bit like Jamie Foxx) is recruited to use his Bible knowledge and personal charisma to preach to slaves on nearby plantations and thereby be a calming influence.

The idea is – well, remember what Marx said about religion being the opiate of the masses?

Naturally, any wages Nat earns go to his new young master, Samuel Turner (Armie Hammer), who was once his childhood friend. But after witnessing incredible cruelty – rebellious slaves being force-fed, other slaves being starved – Turner starts to question, well, the whole damn thing. His allegiance shifts from a loving God to a wrathful one. (The transformation has echoes of the great 1972 Peter O’Toole cult classic, “The Ruling Class.”) 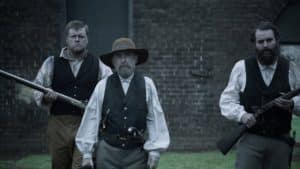 In truth, there’s not much known about the real Turner. But that’s part of Parker’s genius.  Not so much the invented backstory, but the filmmaker’s deeply disturbing evocation of everyday slave culture.

A young African-American woman is sent up to the master’s house to be used as a human party favor by the male guests after they’ve finished dinner. Another young woman is given to Turner’s daughter as a wedding present – as if she were a puppy or a new car. Early in the killing spree, Turner enters an overseer’s bedroom and we clearly see the man has been sharing his bed with a little girl (A slave, of course.)

Parker shows us how being black in that place at that time means you are always at risk (the present-day resonances are intended). He unsettles us and makes us scared for Nat, for his wife Cherry (Aja Naomi King), for anyone and everyone who isn’t white.

The entire cast is superb. So are Parker’s images, especially an eerie mass hanging that’s part of the slave owners’ payback for Turner’s rebellion.

Now, about the controversy…. 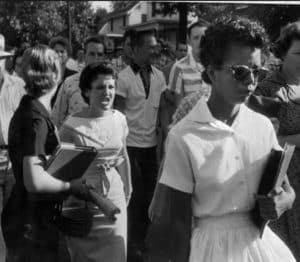 A few characters in ‘Birth of a Nation’ remind of the haunting look on the faces of some real life protesters who turned out to oppose the enrollment of Elizabeth Eckford, shown here in 1957 as one of the Little Rock Nine who integrated Little Rock (Ark.) Central High School. Credit: indalandoftrees.blogspot.com

Part One: Parker has impudently appropriated the title of D.W. Griffith’s famed 1915 film. Treasured as an artistic breakthrough, the work is also one of the most racist movies ever made.

Part 2: More troubling are the allegations that have surfaced about Parker himself. In 1999, while a student at Penn State, he was tried for rape. He was acquitted, but his accuser later committed suicide.

It’s always a difficult thing — separating the artist from the art. However, there are so many things in “The Birth of a Nation” that demand our attention that, in an odd way, Parker’s film is almost a mirror image of the original. Yeah, Griffith was criminally messed up on the subject of race, but his movie was amazing.

And here’s a final thought: When Turner is hanged, his execution is treated as a spectacle, with dozens of whites in a flag-draped grandstand, screaming their bigotry and blood lust. There is a look on one or two of the female faces that chills you to the bone. Because they look just like that white girl in a celebrated Civil Rights photo – her hate-filled face frozen in time – who protested Elizabeth Eckford walking into an Arkansas high school in 1957.

Sometimes a nation needs to be reborn.