A scene from "Bitterbrush"

Tom Robbins had the right idea. Even cowgirls get the blues in the understated yet oddly mesmerizing documentary – “Bitterbrush.”

However, they also laugh a lot, tickle a puppy’s tummy, tame a wild filly, and gaze upon some of the most magnificent scenery the American West has to offer.

Hollyn and Colie are pals who’ve been riding the range together for five or six years (neither is sure which). These twentysomethings make their living rounding up cattle. It’s seasonal work, roughly late spring to early fall. It’s isolating as well. For about four months they have only each other, though Hollyn’s fiancée, Elijah, drops by occasionally to see her and help out. 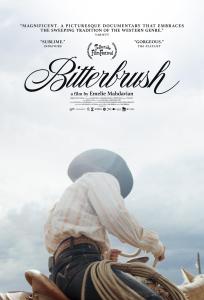 Filmmaker Emelie Mahdavian catches up with them during a stint in the Idaho mountains.  Their new temporary home is a dusty rustic cabin with a chair, a hat rack and running water. “Living high on the hog,” they joke.

Slowly we get to know them. One carries the ashes of her favorite dog (they have about seven helping them out) in a flour tin. The other remembers how the sadness of her mother’s days on life support were somewhat leavened by the fact that, as she sat by her hospital bed, “I got to memorize her hands.”

The work is constant. Aside from rounding up cattle, they mend barbed-wire fences, help a sick cow, saddle-break the aforementioned filly (she’s a palomino, so they name her Marilyn, after Marilyn Monroe), etc.  Being exhausted – “mentally, physically, metaphysically” – is part of the job.

And about midway through, something happens, the sort of life-changing something that would be the entire plot of a different kind of movie.  But here, it’s just another part of life, dealt with in the same matter-of-fact manner they handle everything else.

Overwhelming almost everything is the film’s backdrop – the sheer immensity of the magnificent landscape, the breathtaking beauty of the star-spangled sky. No wonder these cowgirls love what they do; no matter how hard things get; they’re living in the middle of a John Ford movie. A scene from “Bitterbrush” documentary

Yet Mahdavian isn’t after poetry here. Her picture is as spare and basic as Hollyn and Colie’ s work. It probably helps to like animals or documentaries or both. Still, there is beauty here. And integrity. And a lulling sense of the natural order of things.

Except, in this case, the natural order of things includes cell phones. These two are making a living, not pretending to be cowgirls on a dude ranch.

Jean-Luc Godard, in his usual preening manner, once criticized American movies for never showing people at work. “Bitterbrush” proves him wrong. And it does so in a surprisingly memorable way.