Local artist Gregor Turk wants to use his latest project to start a discussion, and it’s all about Blandtown.

The meaning behind “Red, White, and Black” is multifaceted, Turk said, referring to what was a primarily Black neighborhood that has become gentrified through redlining and other racist zoning practices. 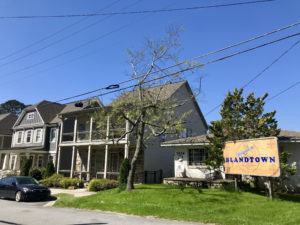 Turk’s studio (right) is one of the few original homes remaining in the area, nestled between homes with a price tag of over a half-million. (Credit: Hannah E. Jones)

Turk has been in the neighborhood since 2003, working from a studio that is one of the four original homes of the area and wants to help set the record straight about its history.

So the story goes, slave owner Viney Bland gave Felix Bland, a freed former slave, four acres of land in her will. He later lost the property for not paying taxes.

Blandtown held 200-300 homes, with mostly Black residents, for over 80 years. In 1956, Blandtown was rezoned from residential to heavy industrial, therefore starting the trend of gentrification and displacement.

Turk sees himself as a link between the old and new Blandtown, as he’s watched the transformation from his studio window.

“I’m the white guy telling the story; the history is not mine,” he said. “I’m just trying to help cover it and get it out.”

The black and white images are accompanied by words alongside the prefix “re,” giving viewers multiple interpretations of the message.

Re/tell shows a 1936 photograph of resident Sarah Huff in front of her home, which became Atlanta’s oldest existing house but was later bulldozed unceremoniously in 1954.

Huff kept a diary all through her life, which inspired the title “retell.” Without the prefix, “tell” describes where one community gets destroyed and another is built on top.

His project serves as an ode to Blandtown and hopes to reinforce a sense of belonging.

“Public art, for me, is a way to reinforce place,” Turk said. “I like to look at the history and the location and what that location means.”

“We’re hoping that we can achieve that balance between embracing the past, letting people understand the history, and also figuring out how we can incorporate it so that we can grow in a direction where we’re creating more housing and a more livable area,” she said.

Turk says the overarching theme of the project is to “reclaim and proclaim.”

He hopes that by telling the story of the past, Blandtown can reclaim its history — its true one — and ultimately reclaim its future.

Previous Article
Duncan looks ahead to GOP 2.0, as Big Money looks for a political home
Next Article
Pivoting in the pandemic: Tech firm shifts from smart buildings to PPE, back again