Her much-celebrated body has been cold for well over half a century. Yet Marilyn Monroe still enthralls.

The newest, um, assault on her legacy is the Netflix movie, “Blonde,” directed by Andrew Dominik (“The Assassination of Jesse James by the Coward Robert Ford”) and starring Cuban actress Ana de Armas (“Knives Out”). 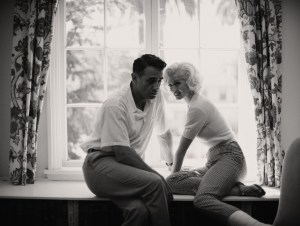 A scene from “Blonde”

“Assault,” alas, is probably the best word for “Blonde,” a showy exercise in exploitation and salacious story-telling. (Turns out that other died-young  ‘50s icon, Elvis, was lucky he got stuck with Baz Luhrmann. Who’d have thunk it, as they used to say.)

Based on a novel by Joyce Carol Oates, the movie follows Marilyn from her abused childhood (mom is a total nutcase) to her abused incarnation of all-American carnality. As she herself sings over and over – an example of the film’s ham-fistedness – her heart may belong to Daddy, but those lips, those eyes, those breasts…they belong to all of us.

No wonder the movies’ quintessential Blonde Bombshell self-imploded one lonely Saturday night in August 1962. Accidental overdose? Kennedy-orchestrated murder? Who knows? We may never know. And, to his credit, Dominik seems disinterested.

But he’s very interested in every other vicious detail, truth or fiction, that ever attached itself to Monroe. The result is an overlong (three hours), fragmented (yet ponderous) fever dream of what – never who – Monroe might’ve been. 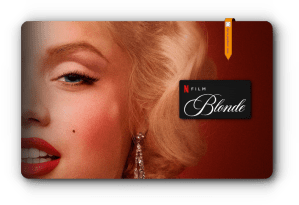 For those totally unacquainted with the Marilyn Myth, “Blonde” might hold some interest. It does, in its own lopsided way, recount the outline of her life. The film touches on her marriages (to slugger Joe DiMaggio and playwright Arthur Miller), her affairs (most notably, with JFK), her Hollywood high points (the infamous subway vent scene from “The Seven Year Itch,” the wiggly “Some Like It Hot”), her objectification by rapacious (literally) Hollywood moguls and a leering press, etc.

And the picture does seem to have a theme of sorts – that Marilyn Monroe was as much a strange creature to the woman who created her (that would be Norma Jean Baker) as she was to everyone else.

But good grief…did we really need an up close and personal scene of Monroe giving our President oral sex while he watches a rocket launch on TV? And what about the talking fetus protesting its own abortion? (It’s not even good pro-life propaganda, coming off, as it does, like a Mad Magazine parody of the last scene from “2001”). The camera was always her best lover, but Dominik even manages to botch that. There’s nothing here of the humor, the timing, the sheer radiance that set Monroe apart. It’s almost as if the movie doesn’t trust its own magnificent center (and the game, lovely de Armas really does provide a center).

Rather, he distracts us with camera tricks:  changing from black-and-white to color, switching up screen ratios, that sort of thing. How a bosomy brunette with a luscious smile transformed herself into a wet-lipped platinum blonde icon is ignored. Or maybe that’s too human for this film.

Because, ultimately, that’s what “Blonde” lacks. Any sense of Monroe’s humanity. Of the flesh-and-blood person under the flesh-and-fantasy persona. This is the Marilyn of screen savers, coffee mugs and T-shirts.  She deserves better.