Luck, hope, and the ‘Book of Mormon’ ticket lottery 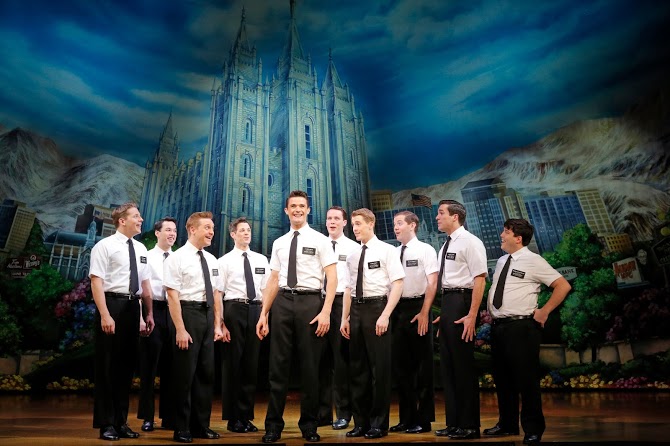 The hottest ticket in Atlanta in 2014 so far was “The Book of Mormon,” which on Feb. 9 ended its run at the Fox Theatre. The show ran during the week of my wife’s birthday, and I thought scoring a couple tickets to the sold-out show would be great.

Even better for our budget and family lore if I could win the daily lottery at the Fox. The theatre sometimes releases rush tickets for popular shows. Twenty prime seats for “Mormon” would go for only $25 each to ten lucky winners whose names get drawn from a box two hours before showtime. 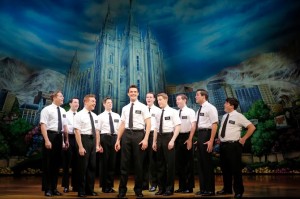 The key word here was lucky. I don’t win anything. The ticket lottery could be, however, a test of how truly elusive luck is for me.

Just like the carnival, just like baseball, I decided to give myself three chances to put my crappy track record at contests up against the destiny of “The Book of Mormon.” This is what happened.

“In setting these dark elements to sunny melodies, ‘The Book of Mormon’ achieves something like a miracle,” the New York Times said in a glowing 2011 review when the play opened on Broadway. The creators had found a sweet spot between ridicule and reverence of religion, and “Mormon” went on to win nine Tonys—including best musical.

I wanted to see what everyone was talking about, and I wanted to be able to tell people that I had seen it too. This is what I was thinking about at the Fox box office as I wrote my name on a card, dropped it in a box and waited around for a half-hour for the drawing. The more I wanted to see it, however, the more I thought about not getting in.

Don’t get me wrong. It’s not like I see myself as any more cursed or blessed than the average U.S. citizen. Like everyone else, I’m still trying to dig myself out of the Great Recession, trying to find a new purpose to my life now that my first act is over.

In spite of that, I have a good life. After 23 years of marriage I still believe I married above myself. I have two incredible children, a comfortable home and a dog that behaves herself most of the time.

Yet I’ve never shouted “Bingo!” at the Knights of Columbus or on a cruise ship, nor snatched the grand prize drawing for the car, the cabana or the luggage, nor been the 100th caller to the radio station to get a chance to name Katy Perry’s pet hamster, nor shot enough ducks at a carnival to win the giant panda, nor been closest to or farthest from the pin to add a couple of balls to my bag.

I’m just not one of those people who have that extraordinary knack of winning more than the ordinary benisons of day-to-day life. 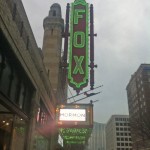 Unlike me, the people I met Thursday night seemed really confident about their chances.

When I asked Lyn Barnett if she was feeling lucky, she replied, “Talk to him.”

She pointed to her friend Bill Buckner. “This is the luckiest person you’ll ever meet. Every time there’s an opportunity to win something he wins it,” she said.

Buckner just shook his head. Barnett, he said, was talking about door prizes given away at the school where he teaches. “Usually there are more prizes than there are winners,” he said.

The “Mormon” tickets odds weren’t bad, either. According to Russ Belin, vice president of Broadway in Atlanta, each of us would have about a 1 in 5 chance of scoring two tickets from the drawing. 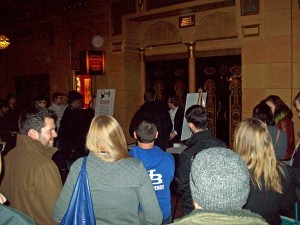 The crowd gathered around a table outside the box office to hear the winners’ names called.

Barnett’s name was called, then Buckner’s. She picked up her tickets. He passed, because he would use one of hers.

Friday night looked better, I thought. So did Greg Mayer. The crowd gathered around the table looked considerably smaller, somewhere between 40 to 50 people. I figured this doubled the chance one of us would win.

Neither of us did.

Mayer vowed to try again. So did I, though I wasn’t feeling the entertainment or the excitement of the thing.

I arrived late for my third and final try, and shook my head at the largest crowd gathered yet for the drawing–more than 100 people, perhaps. I started talking to other members of the crowd and found a kindred spirit.

“I’m a cynic when it comes to these kinds of things,” said Devin Cooney, an IBM consultant who said he doesn’t believe in luck. 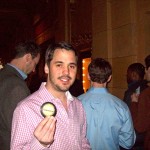 Devin Cooney holds up a button that comes with winning a $25 prime seat to The Book of Mormon.

But when the drawing was announced, our kinship dissolved. Cooney’s name was called. Mine was not.

He wasn’t laughing. “I take back everything I said before,” he said.

As I drove home empty handed, my car broke down on a busy street where there was no shoulder. A kind truck driver who spoke little English but who clearly had an obvious knack for working on automobile engines helped me push it to a side street.

He quickly diagnosed the problem. He said it was a faulty alternator—the one I’d replaced for $350 four months ago.

As I sat in the dark wishing the tow truck wouldn’t take too long, and hoping my Samaritan had misdiagnosed the problem, I pondered my inevitable, unsatisfying experiment with the ticket contest.

I had expected that documenting my streak of bad luck would make me finished forever with contests and drawings and lotteries and fantasizing about ever winning the big one.

Then it came to me that the concept of luck, good fortune or serendipity comes roughly from the same realm as hope. Just as luck insists on the possibility of success under the most improbable of circumstances, so can hope point to the possibility of a better life despite all evidence to the contrary.

I don’t ever want to give up on hope. So I take back everything I said before about luck, except I wouldn’t wait around for it to happen. Perhaps there is still time for me to win the big one. Or maybe, just maybe, the next time Broadway comes to town, I’ll score a front row seat for the price of a movie ticket, a barrel of popcorn and a Coke.

Previous Article
A civic dream: Oglethorpe and the founding of the Georgia colony
Next Article
January Cal-Culator Starts New Year in Right Direction