Georgia will continue to have 14 representatives in Congress, the Census confirmed Tuesday. The granular data lawmakers will use to draw district boundaries is to be released by Sept. 30. 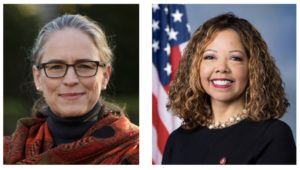 U.S. Representatives Carolyn Bordeaux and Lucy McBath are two incumbent Democrats deemed at “moderate to high risk” in redistricting, according to an April 26 report by Cook’s Political Report. Cook’s is viewed by mainstream media as a reliable and nonpartisan resource.

The political fate of Georgia’s congressional seats is largely in the hands of the GOP-controlled General Assembly. The Republican governor has no formal role in the redistricting process, but the office does have ways of communicating its preferences.

State law charges state lawmakers with the drawing of boundaries for districts for seats starting with Congress and going down the ballot, to state House and Senate and local offices at the county and municipal levels.

The issue of political control over redistricting looms large as Congress considers a proposal to establish independent commissions to oversee the process. Fourteen states now have commissions, though party control can be exercised over three of the commissions, according to Cook’s Political Report.

The Georgia Legislature is expected to convene later this year to draw new political boundaries based on the Census-block level population counts to be released this summer.

In Georgia, the real issue in redistricting will be the impact of population shifts within the state since the last Census count, in 2010. Georgia’s rural communities are perceived as losing population, as residents move in search of work to cities – mainly to metro Atlanta and Savannah, according to a 2017 report by the House Rural Development Council.

As more residents flock to urban areas, cities gain in political representation at the state and federal levels.

Georgia’s population did not grow or shrink enough, in relation to other states, to result in the gain or loss of congressional seat, which are allotted on a population basis.

Surprises did unfold in California, Texas and Florida.

Regarding California, the Trump administration had indicated the state was a factor in its fight in 2020 to block the counting of undocumented residents. The administration contended these residents would inflate the population of safe-haven states, which would result in more seats in Congress. California lost one seat, though its delegation remains the largest in Congress.

Texas gained two seats and Florida added one; both states had been viewed as potentially gaining more seats than they did. North Carolina gained a seat, bringing its delegation to the same size as that of Georgia.

States with congressional gains include:

States with congressional losses include: