A 40-year insider of Atlanta City Hall has threatened to sue the city if his bid is not reinstated for an airport contract that could be worth $22 million.

Turpeau last made local headlines during the 2009 mayoral campaign, when he was associated with a memo that suggested black voters should unite behind Lisa Borders in order to ensure the election of a black mayor. The memo characterized Reed as, “effectively out of the race” for mayor.

Reed beat Borders in the general election and went on to defeat Mary Norwood in a runoff election.

Turpeau contends that his bid should not have been disqualified last month by Adam Smith, Atlanta’s procurement officer since 2003.

The decision left just one bidder, which the administration recommended win the contract – a three-year deal for a total not to exceed $9.3 million, with options that could extend the deal by four years. The winning vendor is a joint venture of Delaware-based Cofely Services, Inc. and MiJoy Industrial Services, Inc., of Georgia, according to pending legislation.

Henry Bauer contends Aaron Turpeau (in rear) will not get a fair hearing of his appeal of Atlanta’s decision to disqualify Turpeau’s bid for an airport contract.

Now, the entire scope of work for managing the rental car facility is on hold pending an Aug. 19 hearing of Turpeau’s appeal of the city’s decision to dismiss his bid.

Meanwhile, Turpeau’s company is being paid $1 million to operate the facility from July 1 through Oct. 31, according to legislation the council approved last year.

Turpeau’s lawyer, Henry Bauer, who also has deep experience at city hall, said there is no reason Turpeau’s bid should have been rejected.

“Meridian 3T was thrown out on a ridiculous technicality, which is not a technicality, but we don’t need to get into that right now,” Bauer said during the July 30 meeting of the Atlanta City Council’s Transportation Committee. 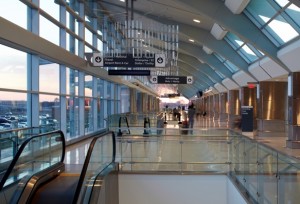 The multi-million-dollar contract to manage the rental car facility at Atlanta’s airport could end up in litigation in Fulton County Superior Court. Credit: pgal.com

Turpeau told the committee the city has a few options to address his concerns. They are: withdraw and reissue the request for proposals, or remove the procurement from Smith’s purview as the city’s chief procurement officer and let the airport decide to allow him to bid on the job.

“I know a little about government,” Turpeau said.

Turpeau served as then Mayor Maynard Jackson’s chief of staff during Turpeau’s 17 years of public service in the cabinets of Jackson and former Mayor Andrew Young, according to one of several online biographies.

Turpeau’s political history goes back to a leadership position in Maynard Jackson’s first campaign for mayor, in 1973. Turpeau has held leadership roles in campaigns including ones of Jimmy Carter, Bill Clinton, Roy Barnes, Shirley Franklin and Michael Julian Bond.

Bauer said he doesn’t expect Turpeau to get a fair hearing from the appeals officer, whom he said is chosen and paid by the city. That’s why the matter seems to be headed to Fulton County Superior Court. 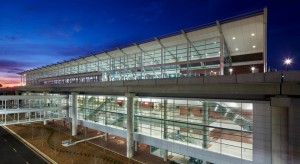 First and last impressions are to be enhanced by the shimmering appearance of the car rental facility at Atlanta’s airport. Credit: pgal.com

Except for the remarks Bauer and Turpeau made at the committee meeting, there’s scant public record that Turpeau’s firm has a piece of the multi-million-dollar CONRAC contract.

The city council approved legislation last year that extended the contract to manage the facility with Meridian Management Corp. Turpeau’s company, 3T Unlimited, Inc. is not named in the legislation.

Bauer said 3T has been involved in the management contract since the facility opened, in 2009.

Incidentally, the CONRAC facility is a major gateway for airline passengers who rent a vehicle at the airport. As such, it helps set the perception among the traveling public for the ease of use of Atlanta’s airport.

CONRAC has a people mover that whisks passengers between the airport and a state-of-the-art car rental facility that provides 8,700 covered parking spaces, room for more vehicles, and multiple customer convenience amenities.

Previous Article
Godfrey Barnsley’s dream: A southern Eden in the wilderness, its collapse, and a modern-day rebirth (Part 2)
Next Article
A welcome to Adair Park – an Atlanta neighborhood that’s a historic gem