A statue of Brer Rabbit has been taken from its pedestal in front of the Uncle Remus Museum in Eatonton, the hometown of Atlanta author Joel Chandler Harris.

“Speculation, as far as motive, runs from prank to scrap-metal sale,” said Stanley Lines, a retired school librarian who resides in Eatonton and runs a lively Twitter update about his community. 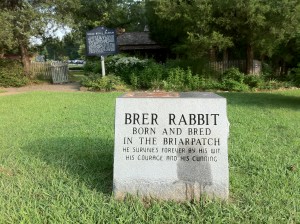 Brer Rabbit was kidnapped from this pedestal in Eatonton. Credit: Stanley Lines

But there may be a more sinister motive to the missing statue, one inspired by politics and related to the current flap involving a congressman who compared President Obama to the “Tar Baby” story, said Lain Shakespeare, the descendant of Harris who oversees the Wren’s Nest, in Southwest Atlanta.

“I don’t want to assume anything, but given the proximity of this occurrence [theft of the statue] to the comments by the Colorado congressman, it could be connected,” Shakespeare said. 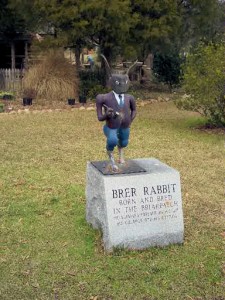 Here’s the quote, which of course has been posted on YouTube. Click here to see the quote:

“Now, I don’t want to even have to be associated with him,” Rep. Doug Lamborn (R-Co.) said Aug. 1 of Obama. “It’s like touching a tar baby and you get, you get, it, you know. You are stuck and you are part of the problem and you can’t get away.”

Putnam County Sheriff Howard Sills said he hopes the statue was stolen as a prank by college kids. 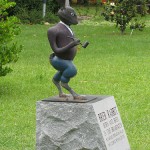 Sills hastened to add that the rabbit statue is just about the worst thing that could have been stolen – it’s that kind of community icon. Sills said an irate citizen called and gave him a piece of her mind after she read Sills’ comments in a news story that struck her the wrong way.

“I told the reporter that I’d picked up Brother Fox and whopped him and found out that he had a good alibi, and that I’d gotten Tar Baby and gave him a good working over and he didn’t say a thing,” Sills said. “She read me the riot act.”

Sills said he fully expects to get a call one night telling him where to locate the statue, and the culprits likely will get a free pass. Anyone who chopped the statue up for parts is in for a world of hurt. 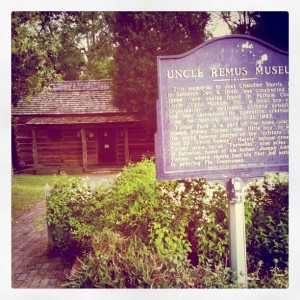